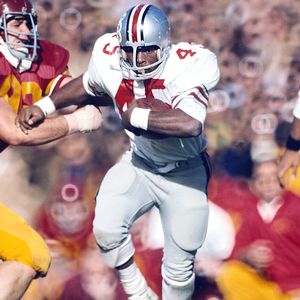 Sure, this may be the last year that we're able to say it: but the Big Ten remains the home of college football's only two-time Heisman Trophy Winner.  That would be Ohio State's Archie Griffin, who played for the Buckeyes from 1972-75.  During that span he had 6,559 all-purpose yards and scored 26 touchdowns.  The scarlet amassed a formidable 40-5-1 record on his heels.  Griffin won four conference titles, and started in four Rose Bowls.

Griffin holds a status akin to a living folk hero. Former Ohio State head coach Woody Hayes said of Griffin, "He's a better young man than he is a football player, and he's the best football player I've ever seen."

Griffin finished fifth in the Heisman vote as a sophomore and won the award as a junior and senior.  In 2007, he ranked #21 on ESPN's Top 25 Players In College Football History list.  Griffin is currently the President of The Ohio State University Alumni Association. 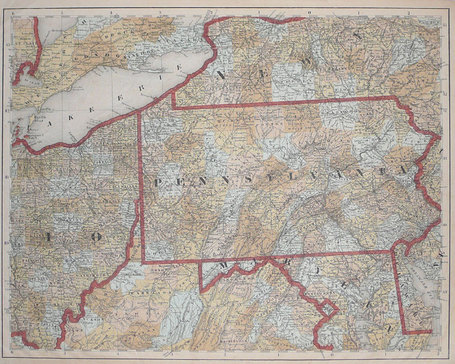 Although it's lost its touch in recent years (only 5 players of the current ESPN 150 are local), two of the top 5 hotbed states for college football recruiting remain in Big Ten territory.  Ohio and Pennsylvania have notoriously produced marquis athletes.  It's no surprise that with a volcanic backyard, the Midwest has held its own in talent throughout the decades. 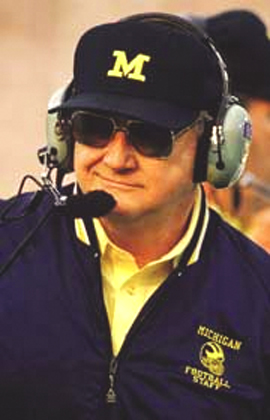 There are few icons more revered in the history of college football than the man who coached the Wolverines for two decades.  As Wikipedia reports:

A consummate "coach's coach", Schembechler combined superb technical command of the game with a fiery disposition. Schembechler's Michigan teams were known for their fundamentally sound, physical, and fierce style of play. Under his watch, the Wolverines traditionally featured strong defense, dominating offensive lines, and a power-running attack. In the words of one commentator, Schembechler coached a "remorseless and punishing" brand of football.  If he perceived a weakness in the opponent, his teams hammered at it time and time again. Though somewhat combative during games — he was prone to sideline outbursts — he was generally regarded by his peers as having great personal integrity.

At Michigan, Schembechler became one of college football's greatest coaches. He won a school-record 194 games, lost only 48, and tied five for a winning percentage of .796. His teams never posted a losing season. In Big Ten Conference play, he had a record of 143-24-3 for a winning percentage of .850. His Michigan teams won or shared 13 Big Ten titles and made 10 Rose Bowl appearances. His 96-16-3 record during the 1970s was the best of any Division I coach. Schembechler led the Wolverines to a total of 17 bowl games, going 5-12 in 21 years, placing him ninth in all-time bowl appearances. He was voted national coach of the year in 1969 by both the American Football Coaches Association and the Football Writers Association of America.

Schembechler's greatest victory is largely thought of as his 1969 upset of the then No. 1 defending national champion Ohio State Buckeyes.  The 24-12 defeat inaugurated a fiery 10-year war between two already decorated rivals.

Schembechler began his tenure as head coach at Michigan with a rallying cry to his players: "Those who stay will be champions."

He left on the eve of No. 1 Ohio State's collision with No. 2 Michigan on November, 17th, 2006.  Bo is missed for his warmth, spirit, and collegiality.  He was the epitome of a "Michigan Man."