We, The Rivalry, Esq. place before this college football court, the 2009 season of the Minnesota Golden Gophers.  This is a team that finally has broken the shackles of indoor living and will open a brand new outdoor stadium. All summer, the question has raged: can they break through the shackles of mediocrity?  I say to you, ladies and gentlemen of the college football jury, ENOUGH!  Let this court give them the fair assessment that they deserve. 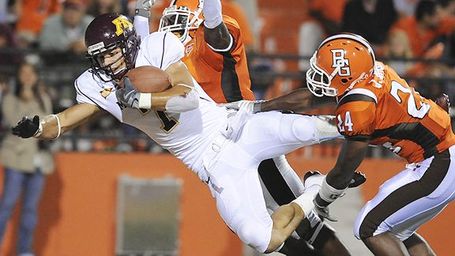 What an incredible start to the 2008 season for the Gophers!  Minnesota rambled out to 7-1 and was ranked 17th.  It hit the point that I actually wrote that if Minnesota won out against four mid-level teams, they could well go to the Rose Bowl.  Minnesota.  Rose Bowl.  You read that right.  It was plausible.

Instead, the Gophers lost all four games down the stretch.  It is hard to say which loss was worse.  They then got blown out by Kansas in the Insight Bowl. 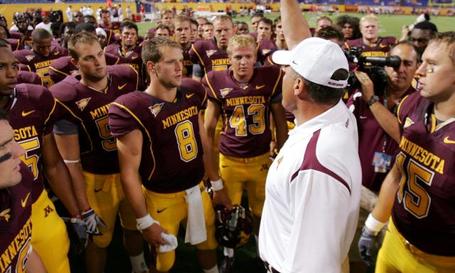 About the New Stadium

Enjoy the stadium while it's young and pretty, Minnesota.

A. I Hate Minnesota

Maybe its because he's lived too long in the South, where hatred is a tangible commodity, but Bama Hawkeye has felt his hatred for Big Ten rivals boiling.  Here's why he hates Minnesota.

B. Why You Should Love Minnesota

7-5 again.  This time, there are more teams eligible, and it pushed Minnesota one spot down in the rotation. Maybe after being outside in the Minneapolis cold they won't mind the dome in Detroit?

Words from an SBNation blogger on their team.  Here's some thoughts from The Daily Gopher discussing their new offense

Offensively the Gophers are trying to change their stripes.  For the last two seasons we have had the Mike Dunbar spread offense (which  fans should be familiar with).  This achieved moderate success through the air but for various reasons it was a disaster on the ground.  So Coach Dunbar is no longer on staff, a run game coordinator was hired away from  and a shiny new offensive coordinator was hired from the NFL.  What exactly we will be running is a bit unclear but we will likely be running.  OC-Jedd Fisch has no hands on experience as an offensive coordinator so what his offense will look like is a mystery but he has had success in the NFL at developing receivers and was intimately close to the Denver Bronco's run game.