We, The Rivalry, Esq. place before this college football court, the 2009 season of the Illinois Fighting Illini.  This is a team that probably overachieved in 2007 and underachieved in 2008.  The people have argued as to what we will see from them in 2009?  I say to you, ladies and gentlemen of the college football jury, ENOUGH!  Let this court give them the fair assessment that they deserve. 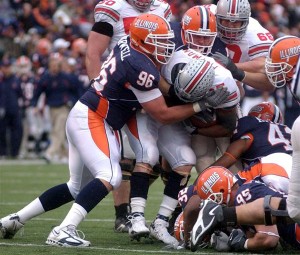 It wasn't supposed to be this way.  No one was predicting a return to the Rose Bowl, but there were expectations that went unmet.  A 5-7 record, coupled with a loss to a MAC squad will do that.  At times the team seemed lethargic, at other times it was just unlucky.  Either way, it wasn't that good.

The story of the Seniors

Roger Ebert, Father of the Huddle, A Galloping Ghost

Ron Zook turning a team around, watching it collapse, and turning it around again?  Now that's Off the Wall!

A. I Hate the Illini

Maybe its because he's lived too long in the South, where hatred is a tangible commodity, but Bama Hawkeye has felt his hatred for Big Ten rivals boiling.  Here's why he hates the Illini.

I hate that with so many citizens and so many recruits, the Illini have been dormant for so many years...I hate that Arrelious Benn hates Iowa for no good reason...I hate that Illinois embarrassed the Big Ten in the Rose Bowl...I hate that they had to have the screws put to them to remove the Chief...I hate that when the basketball team got caught cheating, the fans insisted it was worse to be the whistle-blower than the offender...I hate the Block I...I hate Ron Zook's recruiting magic...I hate the Illini.

B. Why You Should Love Illinois

Because Juice Williams at his best may be the most exciting player in the league...Because with Ron Zook at the helm, your team is never out of it (but neither is Illinois)...Because they're playing a better non-conference schedule than at least 9 of the 10 other Big Ten teams...Because having the third biggest media market paying more attention to the Big Ten is a good thing...Because of Dick Butkus...Because they're in the Big Ten. 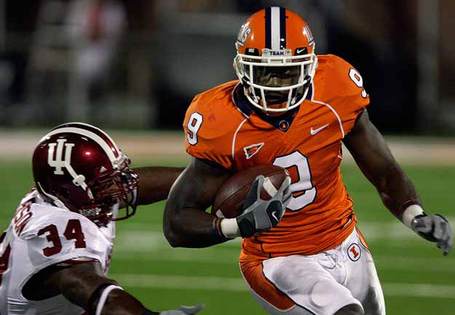 Nine wins, a strong finish and a desire to see Ron Zook back in Florida send Illinois to their first Outback Bowl (they lost to Clemson 30-0 in the 1990 Hall of Fame Bowl in Tampa).  Bulldog fans smile at seeing their old friend.

Words from an SBNation blogger on their team.   Toki Wartooth had this to say about the Illinois defensive line

The outcome of last year, along with the attrition since has led me to take a wait and see approach. Defensive Tackle is arguably the most important position in a college defense. Strength here will go a long way in masking other shortcomings on defense, and perhaps result in a stronger defense overall than last year. I will feel alot better if either Josh Brent or Sirod Williams comes through and contributes this fall. A core of DTs with Sirod, Brent and Liuget would be formidable indeed and could result in a stronger inside defense than we saw in all of 2008. With only Pilcher to look forward to as a reliable DE, the position will more than likely see some drop off. But frankly if the line is as strong as it could be up the middle it might not matter all that much. Bob Assmussen recently said that a defense that includes Josh Brent might mean an improvement of 30 yards given up, in the most unlikely scenario of Brown, Sirod and Brent all being cleared, healthy and not suspended, the Defensive Line will be without a doubt the strongest aspect of the defense on paper. Let's hope the expectations aren't so insurmountable this time around.