After two and a half months on the West Coast, I'm back in Columbus, ready to take in the hot and sweet canter that is August in the Midwest.  The piecemeal grass and scorched dust bowl practice fields outside the Woody Hayes Practice Center mean just one thing: it's time for fall camp.

Three Big Ten teams report this week: Illinois kicks things off on Thursday, with Indiana and Iowa to follow on Friday.

A lot has been made about Minnesota's new TCF Bank Stadium, and rightfully so.  But, many overlook Indiana's new digs.  Early this week, Bill Lynch and his staff moved into Memorial Stadium's new north endzone offices and training facilities.  The large, open glass space lets the players work out in the shadow of the stadium. 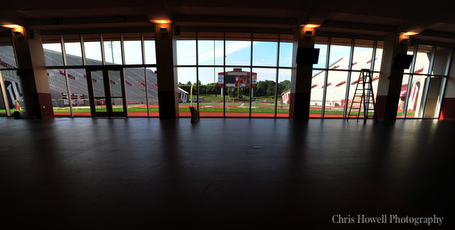 Speaking of the players, freshmen and transfers report Wednesday, followed by everyone else Thursday.  As I said in the Spring:

Coach Lynch's unflinching confidence at Media Days last week gives us reason to assume he's doing all he can to restore a sense of passion and urgency to the bottom ranks.  The unexpected dismissal of record-setting athlete Kellen Lewis might actually boost team chemistry and cohesiveness in the long run.

The other big story heading into the fall is the game of "upset fruit basket" Lynch has played on both sides of the ball.  In an attempt to strenghten an otherwise abysmal defense (particularly the secondary), Lynch moved seven offensive players over to the unit, including four receivers, most notably Ray Fisher.

Will the big switch work?  We'll get a good look starting Friday.