No. 37 - The Incomparable Script Ohio

Touted as the most recognizable tradition in all of college football, this perfect parade of red, black, and brass takes place before every game in Ohio Stadium.  As The Ohio State University marching band website describes:

First performed during the 1936 season, Script Ohio is the most indentifiable trademark associated with Ohio State Football and the Ohio State Marching Band. The script is an integrated series of evolutions and formations. The band first forms a triple Block O formation which will slowly unwind to form the famous letters. The drum major leads the outside O into a peel-off movement around the curves of the script, every musician in continual motion. The middle Block O revolves counter-clockwise as the other two rotate in a clockwise manner. Slowly the three blocks unfold into a long singular line which loops around, creating the OSUMB's trademark.

For three and a half minutes a sea of 100,000 spectators gaze in awe at the 192-piece battalion as it swoops, bends, and marches into the famous letters.  Then the line freezes and something magical happens. 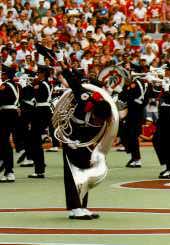 A single sousaphone player leaves his or her position at the top of the "O" and high steps across the formation to "dot the I."  The movement is highlighted by a signature kick, turn, and bow.

[B]ecause of Script Ohio, sousaphone players from all over the country choose to attend Ohio State and try out for the band, just for a chance to dot the "i". Very few get the opportunity to dot, but those who do remember it forever...

Don't play the sousaphone?  You're not completely out of luck.  As the Band reports:

Several prominent individuals and couples have been honored by being allowed to dot the "i". This is considered the greatest honor the band can give to any non-band person, and is an extremely special (and rare) event.

You can watch the full performance here. 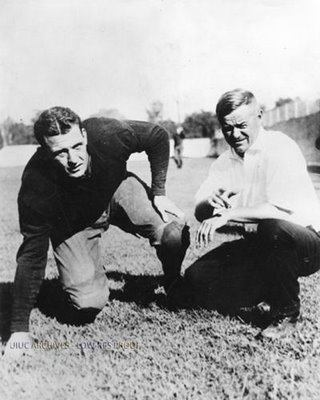 Sure, you know Hayes, Schembechler, and Fry.  But do you know Bob?  As Wikipedia reports:

Robert Carl Zuppke (1879–1957) was the head football coach at the University of Illinois from 1913 until 1941. Inducted into the College Football Hall of Fame in 1951, Zuppke (related to Jordan Zuppke) coached his teams to national titles in 1914, 1919, 1923, and 1927. Zuppke's teams also won seven Big Ten Conference championships, and his teams had a cumulative record of 131-81-13 (131 wins, 81 losses, and 13 ties). While at the University of Illinois, Zuppke was a member of the Alpha-Gamma Chapter of Kappa Sigma. Among the players that Zuppke coached at Illinois was Red Grange, who was the most celebrated college football player of the era. The field in Memorial Stadium is named Zuppke Field in his honor. Zuppke is credited for many football inventions and traditions, including the huddle and the flea flicker.

Along with being a strategic visionary, Zuppke was a bit of a sage -- famous for philosophical proverbs.  Among his more famous: 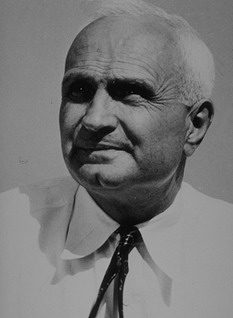 Bierman...never made an emotional speech in [his] life. His teams were as low key and fundamental as his own personality, because Bierman believed in simple, common- sense football. And it won games!