Football Outside of the Big Ten - The Pac-10

Share All sharing options for: Football Outside of the Big Ten - The Pac-10

From time to time, it's important to look outside the Big Ten and remind ourselves that there is football being played by other teams in other conferences.  The Rivalry, Esq. continues its look at those other conferences with the most dominated league in the country - The Pac-10.

No, the Pac-10 hasn't been dominated by any other league.  The Pac-10 have been dominated by the USC Trojans.  The Men of Troy's streak of 7 consecutive league titles (and yes, three were shared) equals the combined consecutive league titles won by the champions of the Big East (Cincinnati - 1), ACC (Virginia Tech - 2), SEC (Florida - 1), and Big XII (Oklahoma -3).  That's impressive for USC.  That's not impressive for the rest of the league. 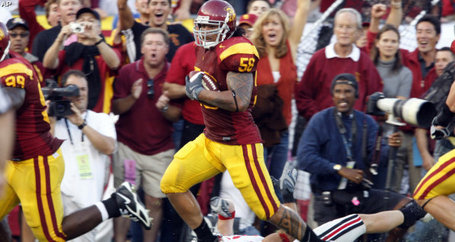 Does anything stand in their way?

USC will be Top Five good again this year.  The questions remain: Will be a season like 2004, where they will avoid an in-league stumble that has kept them from the title games; or Could this be the first time since 2002 that a challenger steps up and wins the conference's Rose Bowl bid?

The USC Trojans won the league with an 11-1 (8-1) season.  It wasn't certain until the last week of the season, though.  Oregon's victory over Oregon State in the Civil War prevented the Beavers from going to the Rose Bowl instead of USC.

USC held their annual Notre Dame beatdown.  UCLA shocked many by upsetting Tennessee 27-24 in OT to start the season.  The shine from that win fell away the following week when BYU pummeled the Bruins 59-0.  That game was part of a bad habit that the Pac-10 had last season: losing to Mountain West squads.  Utah, BYU, New Mexico, and UNLV all claimed Pac-10 scalps as the season went on.

In the league schedule, Oregon State's Thursday Night upset over USC was the game of the year.  Unless, of course, you preferred the Apple Cup.  It took two overtimes, but the Cougars did defeat the Huskies 16-13.  This would be the only Division 1-A victory for either squad. 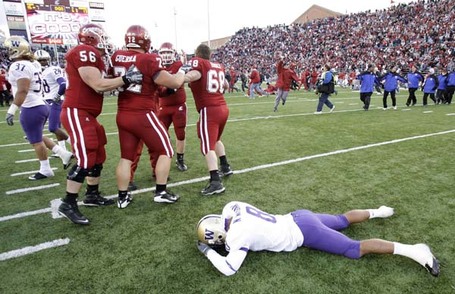 For the Cougars, it wasn't a win.  It was a failure to lose. 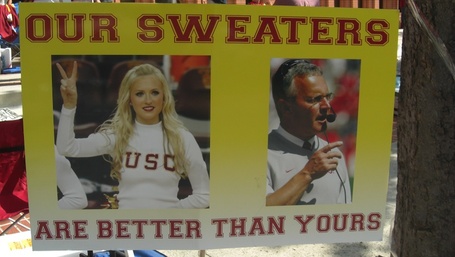 You judge which school had more talent.

You probably heard, the Pac-10 didn't lose a bowl game last year.  I am unable to find a way to make that fact not impressive.  USC beat Penn State 38-24 in the Rose Bowl.  Depending on the color of your glasses, your take on the game may vary.  I saw USC destroy Penn State, scoring 31 first half points and allowing the Lions only 7 though the first three quarters, and then take its foot off the gas in the 4th Quarter.  Others saw a game in which Penn State didn't shake off the rust until the 4th Quarter, which they "won" 17-7.  Either way, Matt Sanchez threw for 413 yards and 4 touchdowns.

Oregon was impressive in outscoring one of the Big XII South's high-octane offenses, 42-31 in their victory over Oklahoma State in the Holiday Bowl.  Oregon State took the opposite approach, beating Pitt 3-0 in the Sun Bowl.  Arizona took a measure of revenge against the Mountain West with a 31-21 win over BYU in the Las Vegas Bowl.  Cal stayed close to home and beat Miami 24-17 in the Emerald Bowl.  It only seems fair after all of the times that the Canes played their bowl game in their home stadium. 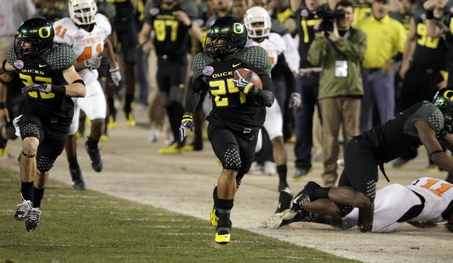 Oregon starts the college football season off with a bang on opening night against Boise State.  They may also face the longest winning streak in the country when they play Utah.  Cal hopes that not playing at 9 AM local time will help them beat Maryland.  Washington has the opportunity to end their losing streak and SHOCK THE WORLD! by beating LSU late Saturday night.  USC's trip to South Bend may be Notre Dame's best shot at beating the Trojans since 2005's "Reggie Bush Push."

The Big Ten may be facing off against the four best teams the Pac-10 has to offer.  They are all part of home/home series, and three will be on Big Ten campuses this Fall.

I know, I know...there are all kinds of great reasons to think that this is the year that the USC domination ends.  They have a ton of players to replace...all of their hard conference games are on the road...they will be distracted by the ongoing NCAA investigations...they have to end the streak at some point.  Here's the thing, if you had to bet your last hundred dollars on the Pac-10 Champion, who do you take: USC or the Field.  I, for one, am not making a field bet. 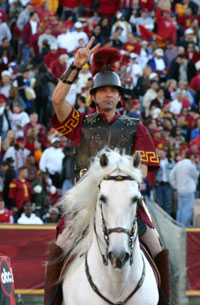 I think that USC, Cal, and Oregon all claim a Big Ten scalp.  I actually like Minnesota's chances of winning over Cal better than Ohio State's chances against USC.

The first question is, does USC get to the MNC game.  I don't think they do this year, although I suspect they'll be in the Top 5 when the regular season is done.  So, pencil ink USC in the Rose Bowl.  I suspect that this year will see a second Pac-10 team in the BCS.  I like California in the Fiesta or Sugar Bowl, but the politics have to break right for them.  I think that Oregon, Arizona, Arizona State, Stanford and UCLA earn spots in the other five bowl games.

Yes, although USC doesn't seem to be getting the benefit of the doubt.  If USC, Florida and the Texas/Oklahoma winner are all undefeated, it sure looks like USC is going to be left out of the title game.  Maybe they can play the 2004 Auburn Tigers.

For any other Pac-10 team, they will need to beat USC and probably be undefeated.  The league outside of USC still doesn't get the respect that the SEC and Big XII get.

This is a question posed to one of the site's founders that relates the conference at hand with the Big Ten. Law Buckeye is up again...

Everyone is quick to discuss (Et tu, Brewster?) the need of the Big Ten to add a 12th team and have a conference championship game.  Would the Pac-10 be better or worse if they added Utah and BYU and split into two divisions?

The Pac 10 is unique in that it already boasts a round-robin scheduling format.  Each member plays each other, reducing the need for a championship game.  An expansion/addition would inevitably gain the conference more exposure in December.  That's a good thing when it comes to BCS bids and the all-important BCS National Championship Game.  But, be careful what you wish for.  Just as teams can play themselves into premiere bowl games with solid conference championship performances, they can just as easily play themselves out of contention.  Ask the 2007 Missouri Tigers how that works.

The problem, for now, is that the Pac-10 is so top-heavy.  USC has won or shared the past seven conference titles, for Goodness sake!  That means (at least in the present) all a conference championship game might do is give a challenger the chance to impress voters and earn an at-large BCS bid.  Putting two-teams in the BCS is something the Pac-10 struggles with under its current arrangement, so the extra exposure and dough might be a plus.

Still, not all "super-leagues" with fancy sponsored championships put out a product that attracts fans.  Ask the ACC how much fun it is to put less than 30,000 asses in the seats on prime time.  Until the Pac-10 becomes more than a one-horse race, interest in a championship game will be marginal at best.

It doesn't help that it's difficult to carve out balanced geographical divisions.  East/West?  Not unless you want each footprint to look like Chile.  North/South?  That's better, but now you've got the two newbies in the same division, specifically:

You could split the new members by keeping Utah in the Redwoods Division and swapping BYU for Cal in the Desert Division.  That might make things a little more balanced, but would it really be more competitive?

However cohesive an extension might look on paper, conference development should be organic.  How many more natural alliances do we really want to see gutted in pursuit of a super-conference?  If the Pac 10 were to take BYU and Utah from the Mountain West, the Mountain West would likely scramble to pull Boise State from the WAC, and the net result would be two more non-BCS conferences nobody wanted to watch.