Some of the Big Ten's most egregious losses came to Mid-Major opponents in 2008. Consider:

In partnership with Mid-Major Madness (MMM), SBN's haven for non-BCS coverage, we present to you the top five match-ups between Big Ten and Mid-Major football teams. At number five stands an important game for the U Dub diehards. Can the Badgers overrun an experienced and fearless Fresno team? Will Pat Hill's mantra of "play anyone, anywhere" pay off with a huge upset in Madison?

MMM: The Bulldogs will head up to Madison, Wisconsin in week two of the 2009 season to play arguably their toughest game of the season. This will be a match-up of two very tough teams that could both use a big out-of-conference win to start the season with some momentum.

For the Bulldogs being the underdog is nothing new; head coach Pat Hill is regarded as one the best in the business at using the underdog status to motivate his to team to big upset victories. More significantly, because Hill's teams have somewhat underachieved the last few seasons, he'll be feeling the heat this year and a big win early on in the season could really help reduce some of that tension.

The Bulldogs look to have a much-improved team from their 2008 campaign in which they finished with a disappointing 7-6 record. The biggest question for them is who will be able to fill the hole left by the three-year starting quarterback, Tom Brandstater. If they can find someone to effectively run the offense and utilize its arsenal of weapons, including electrifying running back  Anthony Harding, they'll have a shot at pulling off the upset. Playing on such a big stage so early in the season will be a lot to ask a young quarterback to do, but unfortunately Fresno has no real alternative. This game will a good barometer of Hill's ability to develop young talent and get them ready to execute on a grand stage.

TRE: Bielema's struggles at Wisconsin have led to great drinking game ideas. Idea 1: Every time an announcer says "hot seat" or some variation during a UW game, drink. Idea 2: Every time the cameraman zooms in on Bielema looking confused, angry, or lost in the clouds, drink.

This season must feel, for UW fans, like standing on a slanted roof. On one side is the former glory of the last 10-12 years and on the other side is the strange possibility of being a mediocre team for a second straight season. It seems like the Badgers could fall either way. 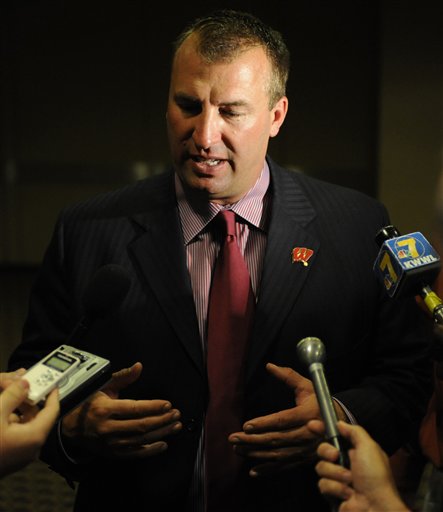 What do Foxy Brown and I have in common? You can find both of us at the hot spot...

Another quick thought - This isn't the same Fresno team that almost took out Reggie Bush's USC team in '05. But this also isn't the 1 loss Badgers from three years ago.

MMM: The Badgers yet again have another dilemma regarding the starting quarterback role. It seems as if they enter every season not knowing who is going to jockey their offense. The leading candidate during this off season has been Dustin Sherer, due to his [limited] experience in running the Badger offense. However Sherer did not exhibit the most impressive play during the 2008 season where he threw for only 6 touchdowns to 5 interceptions. Sherer seemed unstable during 2008, but that can be written off to inexperience.

Pat Hill's defense looks very impressive heading into the 2009 season. They have major playmakers returning and will most certainly improve greatly from a season ago. The most notable returnee is Ben Jacobs who will anchor one of the toughest linebacking cores in the WAC. Jacobs led the Bulldogs in 2008 with 113 tackles and Hill knows his young stud will produce even more in 2009. The Bulldogs biggest problem on defense in 2008 was blown coverage's. This will be different in 2009, as the once juvenile secondary has matured considerably. Moses Harris is going to be a major force in the revamped unit. Harris recorded 75 tackles along with 2 forced fumbles last year. Fresno's defense must create more turnovers and an experienced defense will help accomplish this.

TRE: I agree completely. If the vaunted run game is slowed early, the entire state of Wisconsin is going to be staring at Sherer. Can Wisconsin run play action and get Sherer out of the pocket? Will Garrett Graham play like the possible All-American candidate we know he is? And will Bielema tinker with Sherer's loopy mechanics before the season begins?

MMM: There is no question that Pat Hill's team is capable of pulling great upsets. The team has done so throughout his tenure and certainly posses the talent to do so again this year. This game will be an excellent indicator for Fresno's 2009 season. If they win, it will go along way towards giving them the courage and confidence needed to be successful during conference play. They are set to play Boise St. the following week and a big win in Madison could really give them the extra boost need to beat their in-conference rival.

TRE: Big Ten v Fresno = Big Midwest favorite, usually. Even the horrendous Wisconsin team from last year went undefeated during its out of conference regular season match-ups. However, a closer look at those games show that both Fresno and Cal-Poly (?!) came within a few plays of pulling upsets. This is the most vulnerable Wisky team of the Bielema years and a loss here spreads more Anti-Big Ten grumbling throughout America.

MMM: Both teams are fairly similar talent wise, making this an even battle. Ironically enough they both have similar problems in the quarterback position and whichever team addresses the issue first will be victorious on September 12.

Playing at home, the Badgers will have a distinct advantage. Sherer should show much improvement from 2008 as he is now more acquainted with Bielema's offensive schemes. It is the perfect opportunity for him to break out of his shell and show the Badger faithful his true talents. He will need to minimize his turnovers and if he can do so should lead his team to victory. This will be a hard fought match by both teams that will come down to the wire. Wisconsin 17, Fresno State 14.

TRE: Coach B has made it clear that he isn't modifying the offense or stepping away from the power running. If the big backs get their pads pointed downfield, this game will be over. I see some surprise on the Fresno sideline when Clay runs over some smaller defenders early in the game.  Wisconsin 24, Fresno State 14.

"The Bulldog fans are now beginning to see through the mask put up by Hill's upset wins and are beginning to question his coaching ability."

Well then...Here is a list of BCS teams that Hill has beaten during his reign at FSU -