Point Blank - The Big Ten in the Preseason Coaches' Poll

Share All sharing options for: Point Blank - The Big Ten in the Preseason Coaches' Poll

Well, it's not like this is a surprise, but the Big Ten didn't exactly rake in the love in the newly released preseason coaches poll.  Only three Big Ten teams teams were ranked in the Top 25.  That is one fewer than the SEC had in the Top 10.  It's also fewer than the Pac-10, Big XII, and ACC placed in the poll.  It's the same number of teams as the Mountain West placed in the poll.

I guess it could be worse.  The Big East, like the Sun Belt, is without representation.  After the jump is a look at the three ranked teams and the vote getters. 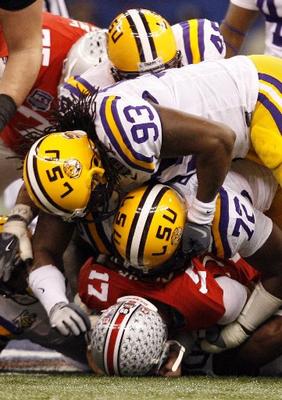 Hard to think that the league isn't still being punished for this.

They lost a lot from a good, but not great, team last year.

They may be better than #5 Alabama and #3 Oklahoma, both of which have massive offensive line issues to overcome.  Pryor may make the leap.

Just right.  They're a Top 10 team that will flirt with the Top Five at various times this year.

Read this.  I still believe it.

They have the most complete backfield in the Big Ten.  Their linebackers may be good enough to stop the pillaging of the secondary.

They beat one good team last year and faced other teams at their moment of disarray.  They lost the best running back in the country and the keystone of their stout defense.

Just right.  If they avoid the early bad losses that have plagued Iowa this decade, they'll move up quickly.  And a definitive vote on the third best team in the Big Ten.