Pollsh*t: Why Preseason Rankings Are Dangerous

Share All sharing options for: Pollsh*t: Why Preseason Rankings Are Dangerous 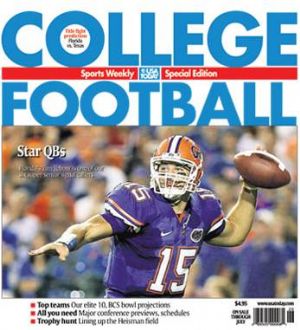 A blind electorate is a recipe for disaster.

With today's release of the 2009 Preseason Coaches' Poll, comes an inevitable flood of hype, frustration, and speculation.  In a sport enslaved by the subjective machinery of a weekly popularity contest, the preseason poll doesn't just mean bragging rights for the teams at the top: it means an inside track to the national championship.

Hence you've got to field good if you're a Penn State fan.  A No. 8 ranking -- based largely on positive vibes from last year's 11-2 campaign -- is prime real estate (compared with last year's 22nd start).  A non-fat cakewalk of a schedule means that the Lions can run the table.  If they do, they're almost guaranteed a spot in the Game.

Since preseason rankings matter so very much, let's take a minute to evaluate what goes into them.  The way I see it there are both subjective and objective bases of justification.  For example, Team A returns a certain number of starters on an offense and defense that ranked on a certain numerical level nationally.  These are objective facts.  Team A won a number of games in 2008.  More objectivity.  If Team B returns less starters, on a less prolific offense and defense, and won less games in 2008 it should be ranked behind Team A.  Simple enough.

But, what happens when Team A returns less starters from a better offense than Team B, or Team B won less games but returns more starters than Team A?

Coaches face objective dilemmas that force them to make subjective decisions.  How do they work it out?

First and foremost, they ask which objective facts matter most.  Then, they turn to a number of soft factors:  Has the team struggled with behavioral issues in the offseason?  Does the team have a new coach?  A new defensive scheme?  Starpower?

Eventually they'll come to a tiebreaker, put one of the teams ahead of the other, and move onto the next dilemma.

Clearly, there's a broad constellation of factors that affect a ranker's thought process.  But before I give coaches too much credit, let's make one thing perfectly clear: FBS Coaches pay about as much attention to their preseason ballots as your remarried Aunt pays to her ex-husband.  Their priority is the start of the season, not the toast of the town.

Accordingly, on the whole coaches do two things: 1. They maintain the status quo (e.g. Florida was good last year, they'll be good this year), and 2. They hand their responsibility off to their program directors with general instructions.  (If you don't think this is significant you obviously didn't pay attention to SEC media days).

The result is we're bound by half-assed metrics and uninspired judgments.

Take, for example, Southern California.  They're No. 4, despite returning just one elite defender (Taylor Mays) and starting a virgin signal caller.  Still, it's no surprise.  Why?  Last year's defense might have been the best the sport has ever seen, they've won at least 11 games the past five seasons, and each time they've been asked to re-load they have.

USC could very well be this year's national champion.  They could just as easily be a three or (blasphemy!) four loss team.  Whichever they are, they'll benefit from their lofty preseason ranking. The same goes for Ohio State.

Meanwhile, other developing teams like Iowa, and Oregon State could miss out on the chance for an at-large BCS bid, because of their comparably low placement.

What am I getting at?  It's simple.  Polls released before a single player takes the field do more harm that good.

We should wait until the end of September, when there's two to three weeks of performance to evaluate, and then break out the brackets.

Anything sooner is dangerous guesswork.