We, The Rivalry, Esq. place before this college football court, the 2009 season of the Penn St. Nittany Lions.  Can this team, with the fewest returning starters in the Big Ten see the success that brought them a Big Ten title last year?  I say to you, ladies and gentlemen of the college football jury, ENOUGH!  Let this court give them the fair assessment that they deserve. 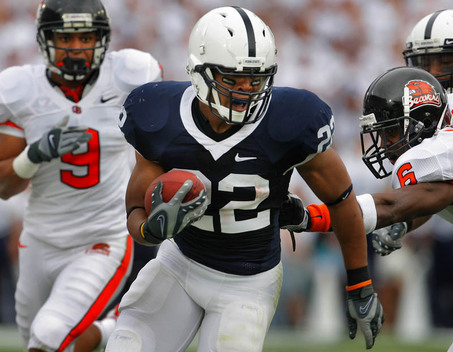 The 2008 Nittany Lions were a good team - a very, very good team.  They steamrolled their non-conference schedule, including a pounding of Pac-10 runner-up Oregon State.  The Lions ended Michigan's hex over them in convincing fashion, and crushed all comers until their annual battle with Ohio State.  In Columbus, Penn State won a beautiful 13-6 slugfest and rose to No. 3 in the country.  Unfortunately, the national title hopes were dashed at Iowa two weeks later.  Penn State recovered from their lone regular season loss to reach their second Rose Bowl under Joe Paterno.

That didn't go so well. 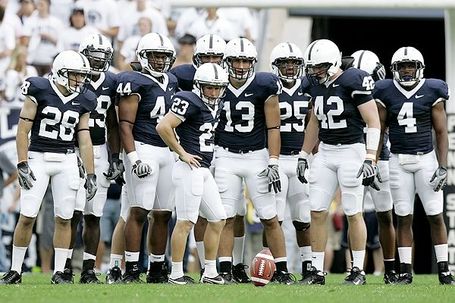 Can They Catch It?

The Case Against Penn State

The secondary, the O-Line, the wide receivers...all out of Penn State's life.  And now they don't know whether to laugh or cry.

A. I Hate Penn State

Maybe its because he's lived too long in the South, where hatred is a tangible commodity, but Bama Hawkeye has felt his hatred for Big Ten rivals boiling.  Here's why he hates Penn State.

B. Why You Should Love Penn State

It's not the bowl game that Penn State fans are expecting, but a shootout with an explosive Big XII offensive provides a great way to spend the night after New Year's Day.

Words from an SBNation blogger on their team.  The Black Shoe Diaries is one of the best sites on this collection of websites.  Here is BSD's explanation of why the Spread HD will succeed even after the exodus of wide receivers.

There isn't anything particularly innovative about the Spread HD offense. A lot of people, including Joe Paterno, have drawn comparisons to the Wing-T offense of the 1940's. It's just an offense that is highly diverse in its personnel and play calling. They spread the defense and distrubute the ball getting everyone involved. The defense can't just focus on shutting down Evan Royster.

A main talking point for those who doubt the Nittany Lions this year is the new receiving corps. They say Daryll Clark will not be the same quarterback without Derrick Williams, Deon Butler, and Jordan Norwood. These same people were the ones calling Butler and Norwood average at best and Williams a bust a year ago. And I suspect they were the same people who said Michael Robinson wouldn't have any receivers back in 2005.

But I say Penn State doesn't need a Michael Crabtree that can catch 12 passes a game for 185 yards and three touchdowns. When you look back at Penn State's stats the past few years, we didn't have a dominating wide receiver. But all three guys would usually finish the day with three or four catches for 50-70 yards. At the end of the day none of their stats jumped out at you, but Daryll Clark would get his 250 yards and two touchdowns. This is what made Penn State so effective.

When I look at this team this year I see plenty of talent for Clark to work with. Chaz Powell will play the Derrick Williams role with the quick slants, screens, and crossing patterns. Graham Zug will be the mid-range to deep threats. Though he lacks Butler's speed, he runs precise routes and has good hands. Brett Brackett will be the guy in the middle replacing Norwood. He's not as shifty, but he's a big physical presence that can fight off linebackers and safeties with his body. Add to this mix some of the talented freshmen like Justin Brown and Curtis Drake and I think there will be plenty of weapons for Clark to work with.