The Rivalry Guide to USC at Ohio State

Share All sharing options for: The Rivalry Guide to USC at Ohio State

So it's Thursday afternoon.  Arguably the worst time of the week for a college football fan.  You're at work staring complacently at the Quorum panels in front of your desk.  It's not Friday yet, so there's no excuse to waste three hours on ESPN.com.  Still, that doesn't make you any less psyched for Saturday.

Make sure to go back and submit your picks for Week 2 of the Obligatory Predictions Contest. NEW this year is our season long competition - win the whole damn thing and we send you something amazing.

We at The Rivalry, Esq. know your dilemma, and have taken affirmative steps to ensure that when (inevitably) you do give in and pop your Internet Explorer browser up like the lid of a toy chest you're productive in a different kind of way.

Today's concept is simple enough: in less than 72 hours No. 3 USC and No. 8 Ohio State will play under the lights on the banks of the Olentangy in the biggest non-conference showdown of the season.  The Ohio State Athletic Department will bring in temporary 250 lux floodlighting kits to shower the historic stadium in a snow like albedo for the first night kickoff since last year's claustrophobic 13-6 Penn State victory.

Internment or Rebirth?  Someone will be buried under a cacophony of sound.

You're going to be there, or at least watching earnestly in the company of others.  We're committed to making sure -- two, three, six beers in -- you're the honorary sage of the group.  What that requires is being well versed in three basic categories of the game: 1. The scene 2. The stakes, and 4. The intangibles.  Without further adieu.

Ohio State and USC, two titans of college football's elite have met 22 times.  On four occasions the game has decided the national championship.  Despite their competitiveness in the 1970s, Ohio State has lost six in a row to the Trojans.

* The barons tied once.  USC leads the Rose Bowl series 4-3.

Eight Heisman Trophy winners have suited up to take the field as part of the series, four on each side.

The tension between these starlets is enhanced by a classic feud on the sidelines.  As BuckeyeGrove.com reports, Ohio State's Woody Hayes and USC's John McKay were anything but sympatico.

Both men had great teams in the 60's and 1970's and met in the Rose Bowl four times against each other. McKay was not a big fan of Hayes right off the bat. After Woody and the Buckeyes defeated McKay and the Trojans in 1969 for the national title, Hayes was confident about their match up in 1973. McKay would be ready this time around.

"I got fed up with Woody," McKay said, after Hayes kept saying that if his No. 3 ranked Buckeyes beat USC, they deserved to be No. 1. "Woody is an excellent coach, but he's so damn cantankerous."

Their rivalry heated up at the 1973 Rose Bowl luncheon, with coach Hayes and coach McKay speaking to the media. Woody spoke first and McKay was to speak second.

After Hayes finished, McKay approached the podium to get ready to speak. Hayes walked out, saying, "I have to go to work. Put John's words on tape for me."

"It was a stupid play to shake me up," McKay said in his book. "I figured he'd do something like that, but he didn't have to tackle me; he had to tackle Anthony Davis."

Davis ended up rushing 157 yards, helping the Trojans crush the Buckeyes 42-17 for McKay's second national title, but that game was only the beginning of three straight Rose Bowl showdowns between Ohio State and USC. The Buckeyes turned it around in 1974, winning 42-21, but in 1975, USC pulled out a nail-biter 18-17, which is considered one of the best games in college football history.

When asked about Hayes, Davis only remembers the great coach by a certain saying,

But this game isn't just about dead celebrities.  As The San Francisco Chronicle reports, "Four previous times Ohio State and USC have met when both teams were ranked in the top five - the 1969, '73, '75 and '80 Rose Bowls - and the most notable may have been the 1980 Rose Bowl when No. 3 USC used a late touchdown in a 17-16 win over No. 1 Ohio State, which had an assistant coach named Pete Carroll, now USC's head coach."

Say what you will about Mr. Carroll being the perfect embodiment of SoCal.  He was a Buckeye first.

Nonsense, you say -- after all, Florida and Texas appear to be shoe-ins for a national championship rendezvous.  But let's not paint the endzones in Pasadena just yet.  The only thing that's kept the Trojans away from immortality the past four years is their bizarre vulnerability to conference minnows (UCLA, Stanford, and Oregon State).  I've said it before: Columbus can't slay the dragon, Los Angeles can't sway the fly.

The difference between this year and years past is USC's conscious acknowledgment of the need for focus in conference play.  On paper, there's not a team in the country that's as far ahead as its conference brethren.  A renewed focus means that if USC can escape Columbus with a win, it has a better chance than both Florida (who has to play a conference championship game), and Texas (who must escape an Oklahoma team with nothing to lose hell bent on Red River Revenge, and an Oklahoma State team with a defense) to run the table. 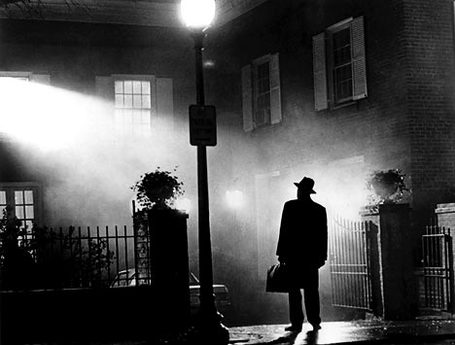 Is this a pallbearer or an exorcist?  We'll find out Saturday.

Ohio State, on the other hand, has a chance to exorcise a few demons.  Not just its own failure to perform in marquis matchups, but the Big Ten's national perception as a gentle giant.  As the AP reports, "Since Ohio State’s national championship in 2002, Big Ten squads have had five top-five finishes in the Associated Press poll since 2002, but the conference has failed to win national championships and Rose Bowls during that span."

While Jim Tressel is right to point out -- as he did during Tuesday's chat with the media -- that no single game can shoulder the weight of past outcomes, the mainstream college football establishment has a short term memory.  That's why Michigan Coach Rich Rodriguez hits the nail on the head when he says that "all it takes is one or two big wins...and [the negative perception] go[es] away."

That's why it won't just be the Buckeye faithful pulling for the scarlet Saturday night, it will be the entire Big Ten.  As Bama Hawkeye so eloquently puts it:

We have fortified our darkness with the souls of 100,000 citizens - each ready to wage war against these Trojans. We have arranged that the battle shall take place at a time of our choosing - night - when our darkness and hatred may reach its most fevered strength.  We will not allow those 100,000 to fight alone.  This week, we are all Buckeyes.  From our western border to our eastern.  Yes, even our Northern members in the glove-shaped land shall be Buckeyes for this moment - for this battle.  We will not fail, because we can not fail.  We shall allow the insurgents to arrive.  And then we will crush them.

And then there are the intangibles...

By this we mean the home field advantage, and the Quarterback play.

The Horseshoe is consistently ranked as one of the nation's 10 Toughest Places to Play College Football.  The Trojans will be greeted Saturday by a rogue legion of some 107,000 plus angry, fair-skinned Midwesterners, buoyed by an extended pre-game period of nervous diffusion, tailgating, and aversion to the conjunctive use of the word "like."  To give 19 year old Matt Barkley a chance to sync with his offense, they'll have to get the crowd out of this one fast.  After all, we're not going down without a fight.

Jim Heacock will undoubtedly load Ohio State's new masquerading 3-4 defense up on the run, forcing Barkley to beat them with his arm.  If we can consistently put the Trojans in third down territory, Ohio State has an advantage on the blitz.  The problem with this ideal is that it requires throwing out the Bible of "bend and not break" defense.  To win, Ohio State needs to risk giving up a big play to get pressure on Barkley early.  I'd rather see a 5 play USC scoring drive where Barkley's helmet hits the turf twice, before finally connecting over the top for a runaway 65 yard touchdown, than a 13 play dribble of 5-9 yard quick slants, where Barkley stays standing. 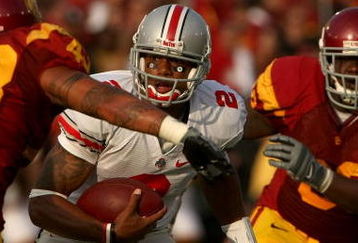 Then there's Terrelle Pryor.  While Pryor's mechanical development as a passer is important, it's his legs that can, and must win the game.  The Trojans have notoriously struggled against running quarterbacks.  As Pete Carroll admits:

"[Pryor is] a deceptive runner because he’s so tall.  He doesn’t look like he's going that fast because he's a long strider. He's very much like Vince Young in that regard. And guys bounce off him and slip off him all the time."

Carroll went on to describe Pryor as "un-tackle-able, if that’s a word." ... "Everybody has trouble with them," Carroll said. "I just think it's the hardest thing to defend, a running quarterback."