Share All sharing options for: Kafka-esque: Northwestern wins a squeeker

No, this isn't a post about nightmaresh situations involving faceless buearucrats. Rather, it is about watching a team metamorphasize (see what I did there?) from a dominating force during one half into one that was either asleep, afraid of contact, or both during the other. The day started out well enough - it was a beautiful late summer day here in Chicago, and as my friend (a nominal Eastern Michigan fan) and I set out for the game I thought to myself, "What better way to spend such a bright and (mildly) hungover morning than by relaxing in the student section of Ryan Field as I watch the Wildcats crush another easy team..." Well, it didn't exactly work out that way.

The first half was a great start, though. After a scary opening drive by EMU, which ended with what appeared to be a blocked FG attempt, Northwestern came out looking like the team that stomped all over Towson during the season opener. They quickly put up 21 points while allowing only a measily (unblocked, this time) FG to the Eagles. The students who had already arrived in Evanston, ahead of the start of Northwestern's academic year, were quite jubilant, and the small contingent of Eastern fans were reduced to cheering only when their team actually managed to acheive a first down.

Mike Kafka, while not as impressive as last week, looked at least to be a dependable QB, though both of Northwestern's offensive TDs were scored on the ground after runs by Stephen Simmons, who had a day like that of Arby Fields last week. The defense even capped off its great first half play with a TD of its own on a 70 yard interception return.

After the half, all was not well on the north shore however...

Week 1 recap of the action vs. Towson

My season introduction for Northwestern 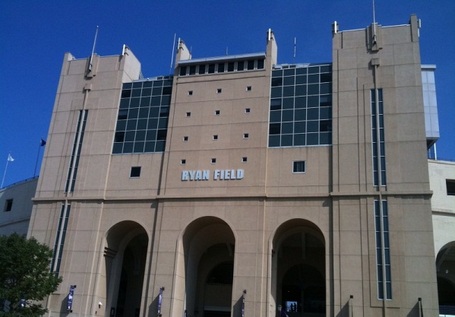 To be honest, I still am somewhat mystified by the conclusion of today's game. I expect performances like this from the Cubs at times, but Northwestern? It really looked like the Wildcats entered the locker room at the end of the 1st and last week's Hawkeyes came out in their place for the 2nd.

All of a sudden, EMU developed a running game, and those short little throws that the defense had handled up until then magically turned into 18 yard gains. A poor execution by special teams on a punt resulted in the Eagle's having possession about 30 yards from the end zone. The resulting TD would end up being the jolt Eastern needed as it was followed up by two more after a horrible intereception on a ball that Kafka really should not have thrown, and a few quite spectacular runs by Dwayne Priest.

As this was going on, the stands got rather quiet rather quickly. At times it seemed as though Northwestern was in for the upset of the week - and all I could think was how much I wished Fitz would say or do something that would get the team back on track. The game ended up coming down to a 49 yarder by Stefan Demos, and a (slightly) redeeming interception by the defense on EMU's last try. I was quite happy to not have to sit through overtime, but still left the stadium feeling a bit unsettled.

I think Kafka's arm and accuracy are improved, but I am somewhat concerned about the decision making. He was really lucky to have only the one INT today, as there were a few dropsies on the part of the Eagles that could have turned the game into a really ugly affair. I also want to know why the defense, for two weeks in a row, seems to tune out when the offense scorse a couple times. Memo to the D/ST: NU gets big leads BECAUSE you guys play with heart through the first quarter or two, not because you fall asleep and blow your coverages. Keep your head in the game and keep your opponents down. You're better than this.

Next week the 'Cats are away against Syracuse, and I'd really like to see a big lead early (maybe with a TD pass or two from Kafka?) turn into a big lead late as the defense plays the entirety of the game. A win like that would put Northwestern at 3-0 and in a good position going into the huge conference opener against Minnesota at the end of the month. For now though, I'm just happy for small miracles and long field goals.