Share All sharing options for: Big Ten Game of the Week 1.0 - Michigan State Falls to CMU

Best game I've ever attended in person? Well now, let's not be hasty with declarations, but My God. What didn't this game have? Lead swings, peppy underdog, two recovered onside kicks, game winning field goals, a ballsy decision to go for two...The perfect weather and jacked up fanbases added to the game time allure. When the stadium was pulsing with noise and CMU was lining up for a game winning field goal, I wrote in my phone "these are the moments we live for."

Michigan State fans were upset, somber, and tremendously disappointed. But the truth here is that CMU, a Top 40 national program, played a perfect fourth quarter and recovered one of the best onside kicks I've ever witnessed. The Spartans should not hang their heads - this was the perfect storm of events leading to Central's upset.

My favorite "don't forget we hate you" moment happened while the CMU kicker was warming up before the 2nd half. The kicker booted a ball over the net and into the hands of an MSU fan. He turned around and bombed the ball to a friend, who tossed it to another guy standing at the top of the bleachers. This man turned around and dropped the ball over the edge of the stadium, out onto the concourse. Just because.

Discussion outside the stadium centered around whether this was an upset or not. After all, many of the players on CMU's team were recruited by Big Ten schools and there were thousands of Chippewa fans jammed into Spartan Stadium. All of this talk was moot to one inebriated, shirtless CMU fan screaming "Shock the World." Indeed. 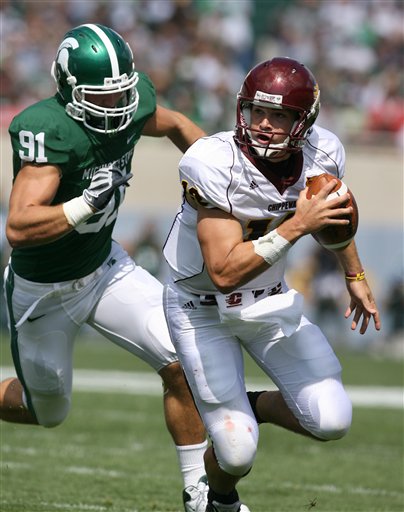 Who in the world is Brian Anderson? Phil Steele had this 6'5'' senior listed as one of the top draft eligible receivers in the nation, but I wouldn't have believed it until seeing him battle Spartan CB Chris Rucker all day. Anderson, the favorite deep target of Dan Lefevour, made circus catches early and chain moving third down catches late, always under blanket coverage from Rucker and the physical MSU secondary. His numbers (6 catches, 120 yards) don't quite tell his impact this 2 star recruit had on this game.

Michigan State's defense proved its strength against the run, slamming Greg Jones (who looked fantastic) and Eric Gordon into the middle of CMU's line and holding the Chips to a measly 62 yards rushing. This forced Lefevour to abandon the QB draws and zone read runs that are such a staple of the Chippewa attack. But CMU adapted well, mixing in wide receiver screens, comeback routes, and underneath routes. Butch Jones, the soon to be feted CMU coach, should be commended for keeping his team calm and making effective in-game changes.

The great quarterback debate in East Lansing should be settled now. Keith Nichol took over for an extremely effective Kirk Cousins and showed exactly why is the glorified second string quarterback. Missing underneath throws and failing to keep his head on a swivel showed inexperience as a drop back passer. Cousins, meanwhile, went 12-16 for 157 yards, not to mention his two PERFECT throws that were dropped in the endzone.