But it's not about the statistics and it's even less about the storybook comeback. It's about the way Forcier played in sync with his offensive line. It's about the gutsy playcalling by Rodriguez and the confidence RichRod showed in his young quarterback. Which means, more than anything, it's about Michigan's football program being on the right track.

Confession: I walked out of Reno's Sports Bar with 3 minutes left in the game. I just couldn't stand the presumed Michigan loss and the ND fan sitting next to me. Figuring my car radio offered me a safer and less annoying alternative, I jumped in the ol' Vibe and drove home, taking in the final drive while rolling down 127 North.

This decision to leave early probably violates man code and leads you to 2 quick thoughts. 1) Wow, you missed the amazing final drive. You must feel horrendous. 2) Betcha wish you could have been there to see that arrogant Domer's reaction. To which I respond, Nahhh. I'm good.

Weis's decision to pass twice and go for the jugular? Gutsy and I loved it. Clausen was the horse that had pulled ND into the lead, why not let him finish the job? One first down just about wins that game.

Speaking of Clausen and that vaunted passing game, didn't it bother anyone that UM's defensive coordinator Greg Robinson refused to double team Floyd and Tate? The two combined for 246 yards and three touchdowns. Please Greg, put a safety over the top instead of leaving Cissoko on an island!

Another fun fact - all that bumping and all those deep balls and I don't think the ref's called one pass interference penalty on Michigan the whole game. So yes, the CB's got torched like a California hillside, but they lived to tell about it. 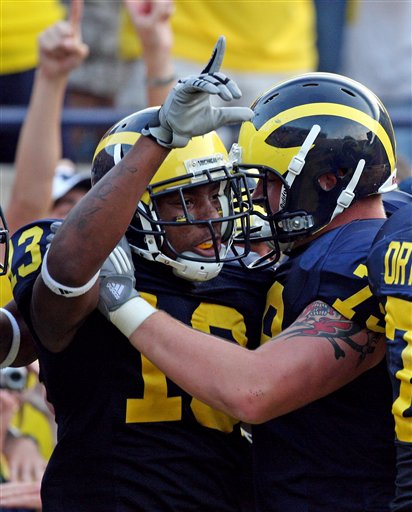 Somewhere Michael Rosenberg is firing up Microsoft Word with a gleam in his eye.

"Sometimes you recruit a guy and he worries about who else you're recruiting," Rodriguez said. "Tate didn't really care. … When he came to camp here, he threw for four hours straight, then he was asking, 'What else do you want me to do?' I told [quarterbacks coach Rod Smith], 'That's the guy we want.'"

Four hours straight? That has to be some kind of recruiting violation. And if it's not, it certainly can be spun into sounding like one by the Freep. All those "extra practice" jokes can't quite explain the fight that Michigan players have regained this year. It's great to see the lifelessness of last year's disjointed effort replaced by the attacking, never-die style of 2009.