Inexperienced Purdue, in transition from Tiller to Hope, smashed heads with the talented Ducks and almost walked away with a victory. Maybe my natural optimism is a negative when it comes to recapping football games. So be it. But these reborn Boilermakers might be the most intriguing team in the Big Ten.

The recap of the Forcier Experience in Ann Arbor

Law Buck comes out of his cave, haggard and lonely, to discuss the death of Tressellball against USC.

Chris from Smart Football, after reading our varied 1-11 and 2-9 predictions for the 2009 Boilermakers, gave me a synopsis of why exactly he believed Purdue would be better than we assumed. I will bulletpoint his reasons:

Apparently there's a reason his website is called Smart Football.

Highlights, highlights, highlights. Ralph Bolden, the 190 lb. running back who moves with an obvious chip on his shoulder and leads the nation in rushing, went airborne to score from two yards out. Right after crossing the goal line, Bolden was met head on and tossed back violently by an oncoming Oregon linebacker, eliciting an audible gasp from the crowd.

4th and 12 on the Oregon 15, Purdue needs a score to tie the game. Joey Elliot in the shotgun, hands off to wide receiver Keith Smith who's lined up in the backfield, and Smith throws a picture perfect pass into the endzone for the touchdown. According to Rivals, Elliot pushed the coaches to run the halfback option play during this crucial moment.

Oh, and don't forget the multiple dropped passes that would have been touchdowns on both sides, the sudden rainstorm that made Autzen beautiful at night, and the fact that Purdue has a linebacker-killing fullback named Crank. If not for a couple more Elliot picks (he leads the Big Ten with five), we would be having a serious conversation about Purdue's bowl hopes.

West Lafayette. Home of the Big Ten's most effective run game in 2009. That just doesn't roll off the tongue easily. How in the world did we come to a world where a newbie Purdue team has 100 more rushing yards than Wisconsin? 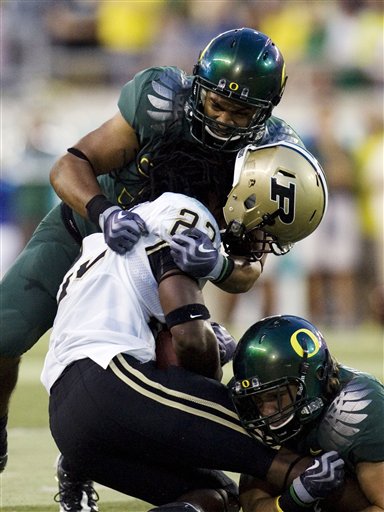 Three main factors contributed to this oddness. Bolden is running low and angry, carrying defenders and consistently breaking the first tackle. The offensive line, full of rather tall but semi-unknown young men, has gotten a push against both Toledo and Oregon. And Hope should be given credit for sticking with the ground game, running from the Shotgun and from under center.

Both Smart Football and Dr. Saturday did features on the evolving Purdue Spread. We witnessed a little football Darwinism Saturday as Hope run about seven different formations, ranging from 5 wide to the I-Form.Until the end of the game, Purdue was running 50% of their plays from under center.