Admittedly, I've been avoiding the site all day.  I suppose I hoped that a voluntary moratorium might help me to be a little less emotional, and a little more insightful.

Yesterday's loss is the second most difficult I've stomached in a lifetime of being an Ohio State fan - the first being 2006's BCS National Championship fall to Florida.  I can't say exactly why this is the case, although I think Matt Hinton is right when he describes the plight of the Buckeyes as "an entirely new brand of disappointment."

No, we weren't blown off the face of the earth like we were that chilly night in Glendale.  And no, we weren't embarrassed, like we were last September in Los Angeles.  Both of those defeats sprang from a basic inability to meet or adapt to our foes.  It was a hollow kind of impotence, like being crushed in the wet coils of fear and confusion, a la Shakespeare's Macbeth ("Till Burnam Wood come upon Dunsinane...")

Last night, by contrast, we were the predator.  We couldn't have imagined it at the time we kicked off, but after 3 and a half quarters Ohio State established a sort of Napoleonic dominance - a beautiful interlude of time of possession, and field position that pinned the Mighty Trojans back within the shadows of their own goal post, and forced them to face their own mortality.

Certainly this would be our salvation.  A smashing triumph of an upset, marked by dominance at the line of scrimmage, and patience in the backfield.  We would kill the Giant, not with power, but with patience - tying it to the stake, drenching it with gasoline, and suffocating its will in a bright scarlet inferno.

Sadly, one Terrelle Pryor forgot to bring a matchbook.  And one Jim Tressel forgot what he learned on a January night in 2002 in Tempe.   After we twice marched to within a yard of the goal line, we dialed up delayed handoffs, and settled for field goals - when quarterback sneaks were the obvious plays.  After our defense gifted five second half possessions to our offense in or near USC territory, we couldn't finish the job. 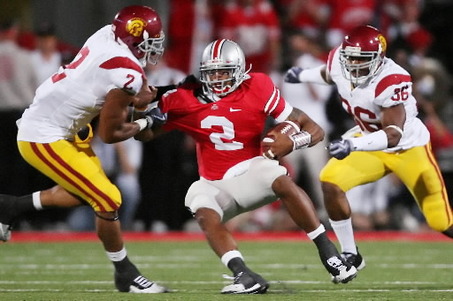 Ironic?  Yes.  Surprising, no.  After all, Los Angeles owns the rights to the Hollywood ending.

Having had the chance to win, and having come up short, we finally have no one to blame but ourselves.  And that is where the blame belongs.

Give credit to the Trojans for not letting Ohio Stadium - and the bravest crowd I've ever seen - swallow them alive.  When they had the chance to crush our momentum, they did - and that is what makes USC one of the premiere programs of the decade.

Still, I can't help but feeling like the ghost of Woody Hayes - emblemized in bold red letters on the south side of B-Deck - closed his eyes, and for just one moment, turned away from the program he created.  After all, as Woody would say, "The only meaningful statistic is number of games won."

Still, since I'm the kind of person who likes to find the good in everything, let me offer a few hopeful thoughts in closing.

Ohio State, the best program in the Big Ten over the past decade, played shoulder to shoulder with the best program in the Pac 10 over the past decade.  Purdue - a team picked to finish tenth in the Big Ten this season, came within 2 points of upsetting Oregon, one of the perennial three best teams in the Pac 10.  If that doesn't say this conference can compete, I don't know what does.

If our young, hungry troops - led by Brian Rolle, and a line that has to be considered one of the best in the land keeps it up, there's not a team in this conference that will put up more than 21 points on the Buckeyes.  (Granted, we might not have an offense that's capable of matching that total).

3. This wasn't supposed to be our year

As my dad - the voice of reason - pointed out as we were walking to our car after the game, had Ohio State pulled off an upset last night, we would have been eager victims of our own success, forced into the drivers seat of a BCS National Championship run that could have only deprived the sport of a legitimate matchup on January 7th.  The true test of this class of athletes should be its ability to grow under a cloud of missed opportunities, and dedication to thrive next season.

Success, after all, is "what you do with what you've got."

Terrelle Pryor should understand that more than anyone.

We will be back.  And we will better for this.