Share All sharing options for: Is Penn State Really a Top 5 Team?

(Editor's Note: Never ones to welch, we present for your approval the musings of a real winner.  Having soundly defeated us as our own predictions play this fan has earned the right to hijack The Rivalry, Esq. and recast the front page for her own purposes: in 500 words or less.  Want to be our next guest contributor?  Stay tuned for Week 3 of the Obligatory Predictions Competition.)

Living in Columbus, Ohio, and being a dance teacher who teaches on Saturday mornings and afternoons, I haven't had a chance to actually see Penn State play this season, other than in the highlights on SportsCenter. And let's be honest, when their first two match-ups have been against Akron and Syracuse, ESPN isn't going to devote a lot of time to those highlights, are they?

So all I've had to go on these past two weeks are stat boxes and analysis from my favorite Penn State blog, Black Shoe Diaries. As an avid Penn State fan, the first few weeks of the season always frustrate me because I don't know what the team really looks like. 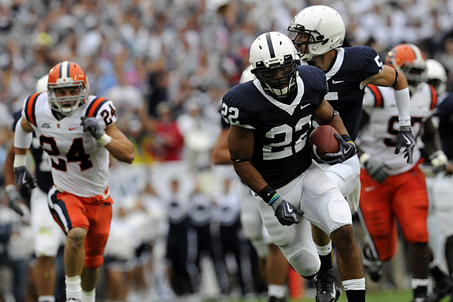 Evan Royster says, "It's nothing a DVR box can't fix."

Here's a generic assessment from the information I have available to me:

The O-Line needs to buckle down and get tough. Evan Royster is a freak of nature and when I see that his stats against Syracuse were 12 carriers for 41 yards, that makes me very upset. This guy had over 1200 yards last season. There's no excuse for such things. The line has got to make some holes so Royster can get the ball moving. These stats may have got us the W's against Akron and Syracuse, but that's not going to fly in Big Ten play.

The passing game is looking good. Daryll Clark has a completion percentage of 69 percent, which is pretty decent. He has already racked up close to 600 yards in the air. Graham Zug and Derek Moye have slipped into the hugely empty shoes of Deon Butler, Derrick Williams and Jordan Norwood and they both seem to be doing just fine. All the pre-season worries were for not- although I wasn't worried. But like I said, passing alone won't get it done once we hit Big Ten play.

The D is very solid and Linebacker U continues to remain intact. Can't really argue with 2 touchdowns allowed in two games. I always prefer a shutout, but I'm pretty greedy. This team has faced mostly rushing teams, though, so they're going to be tested when they meet the pass. Still, as long as these guys keep holding strong, they could prove to be the saving grace later on down the road.

The recap of the Forcier Experience in Ann Arbor

Law Buck comes out of his cave, haggard and lonely, to discuss the death of Tressellball against USC.

Summary of the wild Purdue-Oregon game.

I love the Nittany Lions with all my heart. But can someone tell me who is looking at this squad and seeing the number 5 team in the nation? Don't get me wrong, they have played two solid games, but hasn't the whole world been yelling about their strength of schedule this off-season? Is it just the result of upper teams losing or am I missing something?

I'd be lying if I said I wasn't a little apprehensive as we look towards conference play. I'm certainly not upset by the two victories we've notched, but I definitely see room for improvement if we want to contend for the conference title this season.