Unless you're a Northwestern fan, you haven't seen or heard much about Andy Schmitt lately. But this senior quarterback has been thrust into the Big Ten spotlight after nearly leading Eastern Michigan to an upset win over heavily favored Northwestern. Not content with one game in the Big Ten limelight, Schmitt will lead his Eagles into Ann Arbor this Saturday to face the resurgent Michigan Wolverines. I talked with Andy about the NW comeback, preparing for Michigan's secondary, and his transformation into more of a pocket passer.

Hi Andy, I appreciate you taking this time to talk with me.

I want to keep this short because it's late and you've probably got practice and classes, but tell me about Saturday's comeback against Northwestern. You were seconds away from upsetting a solid Northwestern team.

It's fine, I don't have class until 11. I think we took a lot of confidence from that game. After the disappointment in week 1 against Army, we came out and moved the ball right away in the first half. The run blocking was great but the penalties were killing; we were stopping ourselves and the interception hurt, did you see the play that guy made? So at halftime, we just discussed continuing doing what we were doing.

And the offense came out and methodically drove down the field for three touchdowns. Using the run game to comeback is a different method, especially against a big Northwestern team that I consider maybe the 4th or 5th best Big Ten team.

Yeah they were disciplined and definitely looked the part. We've made some big steps this year since the Army game though. 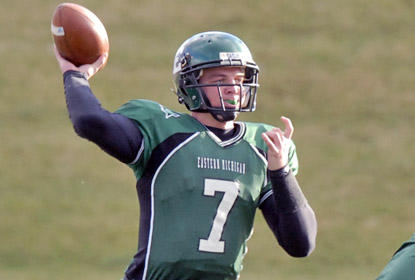 Now you switch focus onto the Michigan Wolverines. Have you done your film study of Michigan already?

We've been up there watching film. We'll see what the coaches have drawn up for a game plan.

Because of the Notre Dame win, there has been a lot of focus on Ann Arbor lately. How do you prepare for the spotlight, 110,000 screaming fans, etc?

First practice tomorrow and we know all about the hype. Most of the guys have played at Michigan though (ed note: 33-22 UM win in 2007), so it's not that big of a deal.

Tell me what (first year Eastern Michigan head coach and former Michigan defensive coordinator) Ron English brings to the team. Everyone remembers his intensity at Michigan.

Intensity is right. He's also very detail oriented, we pay a lot of attention to details.

Now this is a perfect question for you. Michigan played a lot of one-on-one coverage last week and got torn up by Notre Dame. Are they going to adjust and put a safety over the top? It seemed like the corners were on an island a lot.

Well, Jimmy Clausen is a great quarterback and so it wasn't that bad. But Michigan plays a lot of coverage's, they throw out zone, you're going to see some different stuff.

So you're telling me they will give safety help on Saturday?

Oh yeah, they have all kinds of coverage plans.

You got a lot of attention with the NCAA records last year. (Ed Note: Schmitt set NCAA Single Game records for completions (58) and attempts (80), not to mention attempting the most passes in a game without an interception (76)). What did you carry over from last year and what did you have to leave behind because of a new coaching staff?

I was groomed as a scrambler, to drop back and make things happen with my legs. And so last year, I would make go out and scramble around. This year, I'm trying to be more patient and let the offensive system work instead. I work on throwing the ball away more and understanding that five yards is a great gain for short passes. It's a process of transforming from a scrambler to an all round pocket passer.

...Which must be a challenge because you were more of a runner in high school. Thanks so much for your time and good luck this week against Michigan.