The Rivalry Is Watching You: Illinois Linebacker Ian Thomas

Share All sharing options for: The Rivalry Is Watching You: Illinois Linebacker Ian Thomas

Much thanks to Rockwell. This series is pretty simple - I pick an intriguing Big Ten player, DVR his game, and watch him the whole time. Things I want to find out - Is he put in positions to succeed? What formation is he most effective from? Is this player All-Big Ten caliber? Should your team watch out for this guy?

My first subject is Ian Thomas. This sophomore outside linebacker plays for Ron Zook's Illini and was one of the only bright spots in the Mizzou loss. Picking up 13 tackles against the Tigers, he helped the Illini hold Mizzou's offense in check for much of the game (that is until the staggering ineptitude of the offense eventually tired the defense out). Lined up next to top recruit Martez Wilson, I followed his every move in Saturday's game against Illinois State.

The Illini start in a 4-2 formation, obviously not wary of the Illinois State run game. Thomas is lined up as the middle linebacker (MLB). First play, Thomas makes a great form tackle on the running back. A couple plays in, the Illini run a stunt blitz with the LB's and Thomas unloads on the quarterback just as the ball is released, forcing an incompletion. On 3rd down, Thomas smoothly moves his hips and covers a crossing wide receiver. The Redbirds (thats ISU's mascot) are forced to punt.

On the second possession, the Illini are lined up in a 5-2, with Thomas as an MLB. On the first play, ISU playactions to a rollout and Thomas looks confused, following neither the RB or the QB. Maybe he got bored because ISU is low level? Another delayed blitz on the next play and he smacks the quarterback in the mouth, forcing an incompletion. The announcers are saying he's small, with a great attitude, and is an amateur boxer. Good to know. 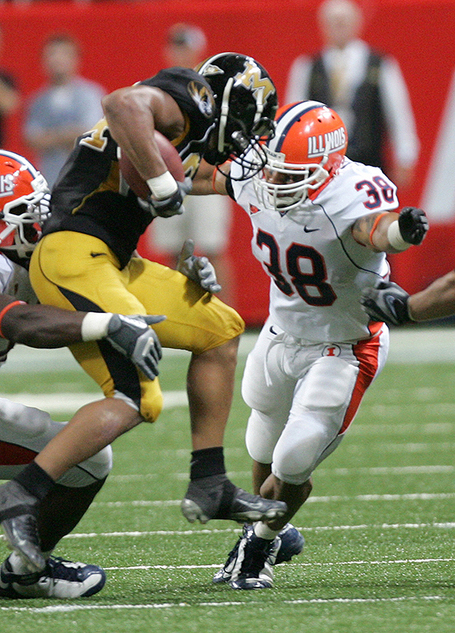 He's spent most of the first quarter lined up as MLB. On the final 1st quarter possession, Thomas crashes from an OLB spot and makes a nice low tackle on an RB. Now Coach Zook has got him playing some safety, operating as a spy on the dump off. Oh here's an interesting formation - Thomas at OLB, Wilson in the middle, and Thomas waives Wilson to a different set up. He's like a coach on the field. There hasn't been much punch in this Illinois State offense, but they've run some smart wide receiver crosses that Thomas has defended correctly.

Thomas begins the second half by lazily chasing a wide receiver screen pass and allowing a cornerback to make the play. The Redbirds are attempting to run the ball right at Thomas, who is warding off blockers decently from his MLB spot. But as Illinois State throws their best stuff at Illinois, Thomas shows his weakness: Pass coverage. He gets beat easily by a WR for a first down and then blows zone coverage by getting sucked into a run fake, leading to a 40 yard dump off pass to the exact spot where he should be sitting.

Following possession, Thomas again shows his weakness in pass coverage, closing his hips and locking onto a receiver instead of scanning the field. If teams run tight end pass routes right at number 38, he may be in trouble. And just as I tear into his skill set, he runs a perfect delayed blitz and sacks the quarterback. Well done.

Strengths: Ian Thomas is a team leader, a coach on the field type. He's also got a lot of spirit - sometimes against teams like Illinois State, it's easy to get lazy and unexcited. Thomas pumped up his teammates on the field and congratulated players for making tackles. Finally, he's fast and doesn't lack in awareness. Has perfect size for an OLB, but is versatile enough to be lined up all over the field.

Weaknesses: Doesn't defend pass routes very well or use his peripheral vision. Allows receivers and tight ends to get too deep in their routes before bumping them or taking an angle.

Notes: This 2 star recruit from Dematha (MD) patrols the field smoothly while directing the defense, but his pass coverage skills leave something to be desired. He hasn't been tested by a power run game yet, so we don't know how he wards off Big Uglies. Do you want him on your team? Hell yeah. Despite only making 6 tackles, he was around every play and it's always good to have a sophomore who reads coverages well and leads.