Indiana Football: Respectability is the Goal

Share All sharing options for: Indiana Football: Respectability is the Goal

(Editor's Note: Never ones to welch, we present for your approval the musings of a real winner.  Having soundly defeated us as our own predictions play this fan has earned the right to hijack The Rivalry, Esq. and recast the front page for his own purposes: in 500 words or less.  Want to be our next guest contributor?  Play Week 3 of the Obligatory Predictions Competition.)

Indiana Football: Respectability is the Goal

I’d rather be lucky than good. That goes for my performance in last week’s prognostication. The same could be said the motto of Hoosier football over the years, but they’ve rarely been good and it’s been even more rare that they are lucky.

A better motto for Hoosier football over the years would be "Killing Time Until Basketball Season". It is a well-known and documented fact that IU football is not only the red-headed step child of the Big Ten, but of its own athletic department (although, kudos are in order for the recent facility upgrades). I am not sure which is the chicken and which is the egg: whether Hoosier fans are apathetic about the program because it’s never been very good, or if the program’s struggles are borne of the fans’ apathy. For the record: I do not think that the apathy is the result of the historical success of the basketball program.

I think that the apathy stems mostly from the historic state of the football program. I was an eyewitness to the Glory Years of Hoosier football. 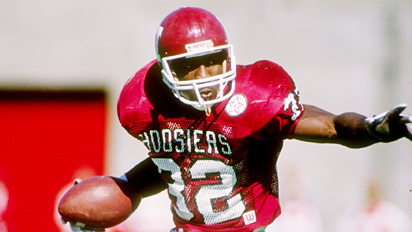 A Photographic Essay on The Glory Years.

My family had season tickets to IU games from the end of the Corso era, through the (thankfully short) Sam Wyche era, and through most of the Bill Mallory era. When the team improved, people showed up. Crowds got larger, were passionate and the games were fun. Bonus: I contend to you that there is not a more beautiful place in all of God’s creation than Bloomington, Indiana on a sunny autumn afternoon. (Although a good argument could be made for Wrigley Field on said same afternoon.)

Mallory was the perfect fit for the program: steady, disciplined, hard-nosed, if not glorious or flashy football. Sadly, at the end, it was time for him to go, and the program arrived at a crossroads. In the same offseason, IU replaced Mallory with an up-and-coming NFL coordinator who was an alumnus, and Purdue replaced Jim Colletto with some yokel coach from Wyoming who ran the *giggle* spread offense. (*guffaw*). The tides had certainly turned in our favor.

Didn’t work out that way. The program is only now working its way out of the giant black hole that Cam Cameron left and from which Gerry DiNardo could not climb. Hoeppner’s death was a tragedy on many levels much more significant than football, but it was a blow to the program, too. He was the perfect fit: optimistic, charismatic, and not a young guy that was looking to bolt for greener pastures. In many ways, much like Bill Mallory.

I will give Bill Lynch credit. The circumstances of his ascension to this job were horrible, and he handled them with tremendous grace. He has worked hard and done well at reducing the talent gap and in just filling up the roster. The defense is better and Chappell appears to be a good quarterback with a strong, accurate arm. Also: he showed cojones when he dismissed Kellen Lewis, his best player for violation of "team rules" (take note, Steve Alford). Part of the problem with last year may have been Lewis. The program is in much, much better shape now than it was when Lynch started.

Still, I question whether he is the guy to lead the program to respectability. And, let’s be honest: respectability is the goal. Our expectations are for competitiveness and an occasional run at the top of the Big Ten, not national or even conference prominence. Purdue and Iowa should be our on-field models, not Penn State, Michigan or Ohio State.

What I see when I watch this team are, first of all, way too many penalties. The talent gap is narrowed, but is still significant enough that you cannot beat yourself. That’s a question of discipline, which starts with the coaching staff. Second, the coaching staff fails to make offensive adjustments during the game. It’s one thing to be Ohio State and commit to three yards and a cloud of field turf, because you are Ohio State. You cannot do that and succeed at IU. You have to adapt. The pistol formation, of which I am a fan, gives you the opportunity to adapt on the fly and keep the defense off guard. If one thing is not working, do something else. It seems like the opposition will make adjustments to what IU does and IU will not make a counter-adjustment. I do not know if that is directly related to Lynch or his coordinators, but the ultimate responsibility for that is the head coach.

I want Bill Lynch to succeed, and I don’t like the thought of a sixth head coaching change in the last 15 years. But it may be necessary. I hope that Lynch proves me wrong.

IU has never really been a destination job for a head coach, with the exception of Mallory and Hoeppner. That may have changed somewhat, given the upgrade in the facilities, which was very well done. This may be the time to find a new coach, particularly since the athletic department is presumably done paying DiNardo, Mike Davis and (*grrrrrrr*) Kelvin Sampson.

Lastly, a hat tip to John M. at Crimson Quarry. It is difficult for a Hoosier football fan to find a good source for commentary and analysis, and his efforts in gathering and compiling links and in providing his own analysis is much appreciated.