Share All sharing options for: On Board With A Navy Blogger - How The Midshipmen Can Keep Saturday's Game Close

The first Saturday of college football should be declared a holiday. It's simply such a relief and surprise to flip on the TV or walk into a stadium and realize that yes, this is truly happening, I will really be spending my whole day watching football.

Another great thing in Big Ten land is the occasional quality non-conference game. We have this on opening day in Columbus as the Naval Academy invades with their triple-option run game and high-motor athletes. I tracked down the Internet's best Navy Football blog The Birddog for some answers on what exactly the Bucks will be facing this Saturday. At The Birddog, Mike has one of the best blog communities I've seen. We're talking 60 comments with insightful, personal reactions.  A huge thanks to Mike for his time and excellent commentary. Onto the interrogatories!

What is your connection with Navy football?

I'm a longtime fan and graduate of the Naval Academy.

Give me your nutshell assessment of the Navy program right now.

In a nutshell, the program is in great shape. At Navy, success is defined for the most part by winning the Commander-In-Chief's Trophy and going to bowl games. Paul Johnson did it for 5 straight years, and Ken Niumatalolo kept the momentum going last year. Navy has a lot of things going for it right now; a renewed television contract with CBS and CBS College Sports, a wonderfully renovated stadium, a new indoor practice facility, high season ticket sales, and bowl games lined up for the next few years (not a given when you're independent). Life is good. 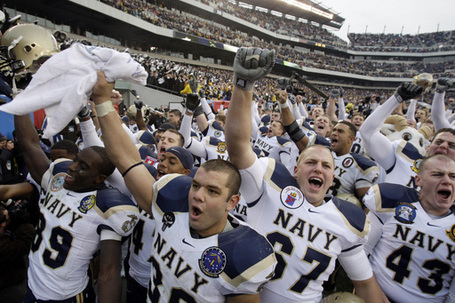 What is the attitude amongst Navy fans regarding this years team?

I can't really speak for Navy fans, but I think the general expectation is that the defense will be one of the best we've had in a while. The offense has a lot of new faces, so we aren't completely sure what to expect from them. Even if this is the best Navy team in a decade, you might not notice because of the schedule.

Will Navy's famed run option be tweaked at all this year?

The offense gets subtle tweaks every year as the coaches refine things, although I don't know that any of us are smart enough to notice them. The one change you'll probably see from the Mids this year is more passing. Starting quarterback Ricky Dobbs has a tremendous arm, and there has been a lot of talk in Annapolis that the coaches intend to use it. Navy only threw 93 passes in 13 games last year, which was low even by their standards.

What are the chances that Navy beats Ohio State? What has to happen early in the game to make this happen?

Ohio State is favored for a reason. It's not like Jim Tressel recruited anyone on Navy's roster. For Navy to win, it's the standard upset template; they can't make any mistakes, and they'll need Ohio State to make a few themselves. That, and maybe a swine flu outbreak in Columbus or something.

Most (okay all?) Buckeye fans are not giving Navy a chance to win. Give me two reasons this game will be closer than people predict.

1) Both teams are going to run the ball; running is what Navy does, and Jim Tressel isn't going to want Terrelle Pryor throwing interceptions. That's going to keep the clock running, and probably keep the score from getting too crazy.

2) Navy's offense is difficult to prepare for even with extra time. Ohio State's physical superiority is one hell of an obstacle to overcome, but if their young defense isn't disciplined, the Mids are fast enough to take advantage. That's a big if, though.

Give me three players who the Buckeyes will have to pay attention to and give me any injury updates on Navy players.

1. Quarterback Ricky Dobbs: Might not be the option technician that past Navy quarterbacks were, but is easily the best passer of the bunch. Navy's offense might look a little different this year as the coaches take advantage of Ricky's skill set.

2. DE Jabaree Tuani: If Jabaree Tuani was 2-3 inches taller, he'd probably be playing for Vanderbilt or Ole Miss instead of in Annapolis. It's very rare for any freshman to start at Navy, let alone a freshman lineman, but Tuani played in every game last year and was named the ECAC Rookie of the Year.

As for injuries, the Mids are pretty healthy. The backup quarterback, Kriss Proctor, is out for a few weeks. The quarterbacks backing up Dobbs are pretty green, so that's potentially a big deal. The biggest impact might be that the third quarterback, Mike Stukel, is a very good athlete that would have competed for playing time at slotback. He can't now, though, because the coaches can't take the chance of him getting hurt.