We, The Rivalry, Esq. place before this college football court, the 2009 season of the Ohio St. Buckeyes.  The dominant force of the Big Ten, the last four seasons have seen zero losses to non-BCS Bowl teams.  No other team in the country can say that.  Unfortunately for national title hopes, the last four seasons have seen eight losses to teams in BCS bowl games.  All the summer, we have debated, will it be more dominance of lesser teams and failure against the elite?  I say to you, ladies and gentlemen of the college football jury, ENOUGH!  Let this court give them the fair assessment that they deserve. 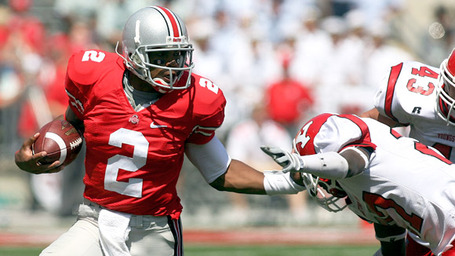 Last year made four Big Ten titles in a row for the men in Scarlet and Gray (and yes, I know that two were shared). That's impressive.  Ohio State won ten games, most of them very convincingly.  It was the two regular season games that they lost the defined the team in the nation's eyes.  USC just obliterated the Buckeyes.  the final score may have read 35-3, but the difference between the teams felt quite a bit larger.  Penn State slipped out of Columbus with a 13-6 victory.  While there was no shame in losing to the two Rose Bowl participants, it did feed the official Ohio State narrative.  They beat the teams that they should.  They can't beat the elite teams.

Fair or not, losing (albeit on a last minute touchdown) to Texas in the Fiesta Bowl didn't make matters any better. 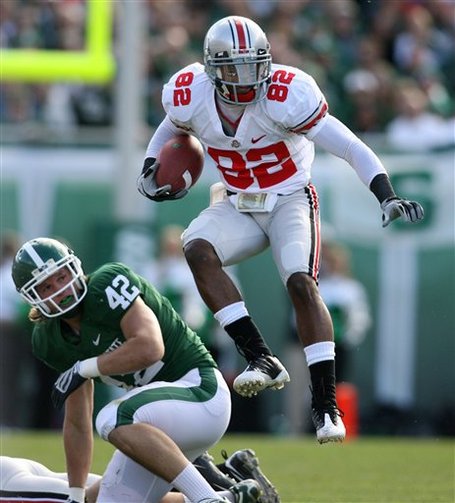 How to Beat the Buckeyes

We were at the largest Spring Game Ever

Being so close to being college football's team of the decade and seeing it get ripped away in two straight BCS Championship games, that has to make you want to Scream.

A. I Hate Ohio State

Maybe its because he's lived too long in the South, where hatred is a tangible commodity, but Bama Hawkeye has felt his hatred for Big Ten rivals boiling.  Here's why he hates Ohio State.

B. Why You Should Love Ohio State

Because dotting the "i" is still cool.  Because Terrelle Pryor may be the one skill player in the Big Ten that makes SEC coaches go, "Oooooo, I wish I had him."   Because since 1920, there has never been a decade in which Ohio State or Michigan has beaten the other 8 times.  That may no longer be true by Thanksgiving.  Because they don't lose to teams that they should beat.  Because the world could use a bit more Woody Hayes in it.  Because they're in the Big Ten.

Conference champs, but no trip to the national title game...that means that Ohio State goes to its first Rose Bowl since Jake the Snake lined up against them.  Unfortunately, they get a third meeting in 16 months with USC.

Words from an SBNation blogger on their team.  Sam over at We Will Always Have Tempe observed this about the running game at the Ohio State scrimmage.  It should cause other Big Ten fans concern...

Much is being made of the struggles with the running attack outside of Herron, but reports from the scrimmage seem to agree that the line has improved its run-blocking over what we saw in the Fiesta Bowl. This is actually a pretty big development: in the first half of the Fiesta Bowl, the line did quite well for itself against a very talented Texas front seven that would end up third-best against the runnationally. In the second half though, Texas adjusted, and largely limited the Buckeye rushing attack outside of Herron's late TD run that put the Buckeyes ahead. (*sniff*) It's important to note that this all went down without the best blocker on the line. A healthy Justin Boren could make this one of the more devastating rushing attacks in the country.