The Road to Pasadena - Who Has the Most At Stake in Week 1?

Share All sharing options for: The Road to Pasadena - Who Has the Most At Stake in Week 1?

In anticipation of the christening of the conference season, let's take a look at what's at stake for Big Ten teams in Week 1.  Out of conference play may define reputations, but in conference it's all about respect.  These are brothers, childhood friends, teammates, and rivals from neighboring towns.  Tommorrow, they'll do battle for the honor of the Midwest. 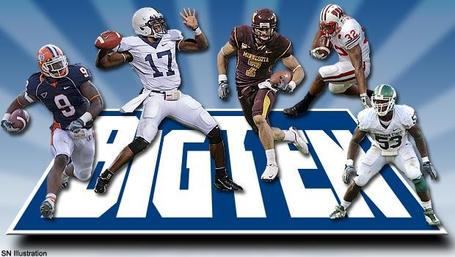 A month ago I would have told you that both teams had little more than lower-tier bowl ambitions.  That's still the Hoosier's raison de etre.  Despite starting the season 3-0, Indiana will need a miracle to get to six wins, with near guaranteed losses against Ohio State, South Florida Indiana, at Northwestern, at Iowa, and at Penn State built into a harrowing schedule.  On the other hand, the sky is the limit for Michigan fans, who have exchanged the fantasy of being Outback Bowl Champions, to Rose Bowl Champions.  A nice softball conference opener is exactly what the Wolverines need to maintain their momentum.

Who needs it the most?  I'm giving this one to the Hoosiers.  To reach the coveted 6 wins for bowl eligibility they'll need to win at least one game they're not supposed to.  There's no better time to start trying than Saturday.

The Hoosiers will win if... they dominate a wounded Wolverine offensive line.  If IU's front seven can slow Michigan's ground game, a more athletic than usual Hoosier secondary might be able to handle the pass attack.  Oh yeah, and they've got to score.  Lots.

The Wolverines will win if... they show up.  No, that's not exactly a rip on Indiana -- it's more of an observation about the storm that's brewing in Ann Arbor.  If Michigan can continue to execute consistently, they'll compete for the conference crown.

Ohio State was a solid, if not speculative preseason pick to win the conference.  After a tepid opening performance against Navy, they dropped to second in our Big Ten Power Poll and they've haven't been able to get a leg up since.  Unlike Indiana/Michigan this game is less interesting than it was a month ago.  The reason?  Illinois continues to blow hot and cold.  In its opener against Missouri, a veteran Juice Williams looked more like a freshman than a seasoned signal caller, showing grave passing inconsistencies, and looking like a deer in the headlights behind a questionable shotgun attack.  The Illini have won 7 of the past 10 in Columbus, including 3 of the past 4.  Yes, you read that right.

Who needs it the most?  Illinois.  Lose here and you're likely staring down the barrel of a 1-4 start.  Do that, and even Detroit will feel far away.

The Illini will win if... they use Juice's mobility when the pocket collapses to connect with lateral targets in space.  As USC will tell you there's no pass blocking against the Buckeye front 7.  If Illinois can edge out to an early lead, they'll put psychological pressure on Terrelle Pryor.  Get him to panic, and the rest is history.

The Buckeyes will win if... they use their shiny new 3-4 defense to disguise pressure, and the defensive line can get to Juice without having to blitz.  Terrelle Pryor also needs to continue to use his legs -- as he did last week -- to cover for broken pass plays.  Run Pryor, Run! 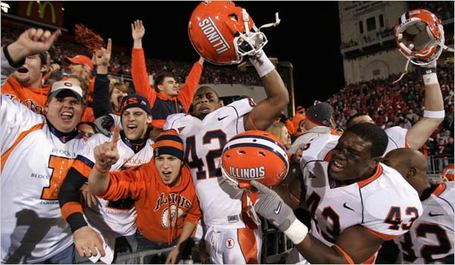 Columbus has been the Illini's home away from home for the better part of two decades...

Wisconsin has rebounded from an absymal 2008 and an offseason full of questions and injuries, to start this season 3-0 out of the gate.  They've done it on the arm of Junior Scott Tolzien who wrestled the starting spot from an intemperate Dustin Sherer, and has already thrown for 641 yards and 4 touchdowns.  Although they haven't faced as tough of an out of conference slate as the Spartans these Badgers are battle tested, surviving a comeback attempt from Northern Illinois in Week 1 and beating Fresno State in overtime the next week.  Michigan State, on the other hand, was picked to challenge the top of the conference, but has stomached two demoralizing last second losses.  Are the Spartans the team we thought they were, or the team they always seem to be?

Who needs it the most?  Michigan State, no question.  Dantonio absolutely needs a quality road win to distinguish this year's crop from the talented, but erratic teams of John L. Smith.

The Spartans will win if... they can take advantage of a lame Badger secondary a la Fresno State's Devon Wiley.

The Badgers will win if... they can get Nick Toon into a shifty Spartan secondary, and use their passing prowess to clear the way for John Clay.

We've debated the merits of this one ad nauseum.  Here's Graham's take on why the Wildcats will win, and Jeremy's retort.

Who needs it the most?  I'm going to give this one to the road team.  Minnesota may well be better than they were in 2008, but a nightmare of a schedule is bound to obscure the distinction.  This is a golden opportunity for the Gophers to pick up a notch on the conference road belt.

The Wildcats will win if... they can keep the Golden Gopher attack one dimensional, and if Kafka plays like he did against Syracuse.

The Golden Gophers will win if... their defensive backfield gets up and personal with Northwestern wideouts, and they put up a modest number of points with the velcro glove theatrics of Eric Decker. 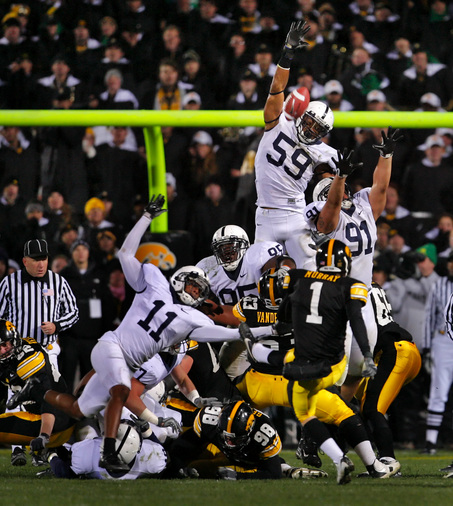 And the Big Ten Game of the Week is...

A talented, but untested Penn State squad will try to turn the tables on its hard-nosed Hawkeye nemesis.  Will Iowa's speedy secondary shut down the Spread HD, or will the Nittany Lions outshine the wounded dark horse to prove to the establishment they deserve their lofty Top 5 ranking?

Who needs it the most?  Penn State.  Without this win the Nittany Lions will have nothing to show for their season until they play Michigan at the end of October.

The Hawkeyes will win if... they keep things close in the first half to take the crowd out of the equation.  They can do it by shutting down the run, containing the pass, and keeping Daryll Clark in the pocket.  Ricky Stanzi also needs to shoot up a saggy Nittany Lion secondary.

The Nittany Lions will win if... they establish the run, open up the passing lanes, and boost their red zone efficiency.