Counterpoint: Why Minnesota Will Beat Northwestern

Share All sharing options for: Counterpoint: Why Minnesota Will Beat Northwestern

Do you know who will win?  Make sure to go back and submit your picks for Week 4 of the Obligatory Predictions Contest. Weekly winners get a chance to write 500 words on the site. NEW this year is our season long competition - win the whole damn thing and we send you something amazing.

Graham did an admirable job laying out Why Northwestern Will Beat Minnesota... but I think he's just trying to get Gopher fans fired up.  I happen to think that he has a soft spot in his heart for the Gophers and he's doing his best to talk himself out of it.

Here's my non-barrister-esque attempt to respond to his points.

Mike Kafka is leading the NCAA in pass completion percentage and can gallop like a horse. He has astonishing potential.

True, true.  True.  But who cares?  NWestern hasn't played a defense like Minnesota.  Kafka absolutely destroyed Minnesota last year, and I get that, but this is a completely different defense than last year.  The line-backing group is one of the best in the Big Ten and the defense continues to show the ability to make in-game adjustments to whatever they are facing from the opposing team... which is good because NWestern is schizophrenic.  Kafka was unreal against Syracuse, but he was average against something called Towson (15/20 192 yards, 6 yards rushing) and Eastern Michigan (14/24 158 yards, 24 yards rushing).

All the injured NW linebackers and cornerbacks will return to play against the Gophers, meaning NW will feature a fully healthy defense for the first time this year. Plus, the Wildcats return their top running back, who didn't play against Syracuse because of injury.

NWestern's defense does make me a bit nervous, but mostly because the Gopher offense has not shown anything of substance as a threat this year.  Having said that, injured players alone cannot account for what Paulus did to NWestern's defense, and it's not like he was spreading the ball around that much... 11 of his 24 completions and 209 of his346 yards were to Mike Williams... those are very Weber-to-Decker-like numbers.

Adam Weber and Minnesota are being lauded for their effort in a two touchdown loss to Cal, while everyone conveniently forgets they barely survived Syracuse and Air Force.

It is convenient that people aren't mentioning that we barely survived against Syracuse and Air Force, and that's fair.  But it's also convenient that the very reason we DID survive those games was because of our defense, who...

...is unexceptional, picking off one ball in three games and failing to generate a pass rush on Paulus or Riley of Cal.

I'll give you that our defense wasn't great against Cal's passing offense (which is also convenient considering we did, at least, a serviceable job of slowing down their rushing offense), but Syracuse had only 167 yards in the air, and only 62 yards of TOTAL offense after halftime (including OT).  Also, while the Gophers only have 1 INT, they also have 3 fumble recoveries. 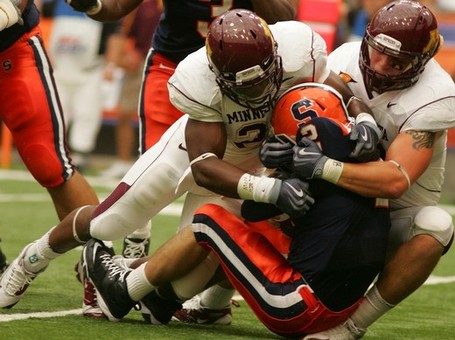 Vegas says Northwestern is favored. And they gamble for a living. Which means they aren't homers who get fooled by an injury plagued miracle loss to an improving Syracuse team.

False, at least as of this morning, when Minnesota is favored by one.  The spread has swung the other way, DESPITE the fact that NWestern has all of these players coming back from injury.  And what does this tell us?  Absolutely nothing.  Vegas does gamble for a living which means they gamble to make money... and minimize risk.  They set the point spreads so that an equal amount of action is bet on both sides of the line.  Additionally it's generally accepted that a home field advantage is worth 3 points... so even when NWester WAS  favored by 2, it still didn't mean much.  The point spread is a wash here.

The Minnesota offense is averaging 21 points per game, has no running attack to speak of, and features a quarterback who takes a sack or gives the ball to the other team when he feels an ounce of pressure. They statistically have the worst offense in the Big Ten, but I realize there was no true cupcake on the Gopher schedule so far, so it's a skewed statistic.

All true, and I will secede this point to you.  But Weber is still learning a new offense and has gotten better each game.

The offense subsists on the occasional circus catch by Decker and little else.

With all due respect, Decker has only had one circus catch this season.

Weber, a veteran leader, has regressed accuracy wise and threw 3 picks in the span of 12 minutes against Cal.

Again, with all due respect, Weber threw 3 picks in the span of 7 1/2 minutes, not 12.   But seriously, all of those interceptions were thrown at the end of the game when he was absolutely trying to force something to happen for this offense... something he did not do during the prior 3 1/2 quarters of this game.  Additionally he is completing 58% of his passes this year, while completing 62% last year, so I'm not prepared to call this a real regression unless the trend continues.

So why all of a sudden do 70% of you believe they're going to snap out of this offensive funk?