Share All sharing options for: Iowa Plows Over Penn State - Bama Hawkeye Gets the Last Laugh 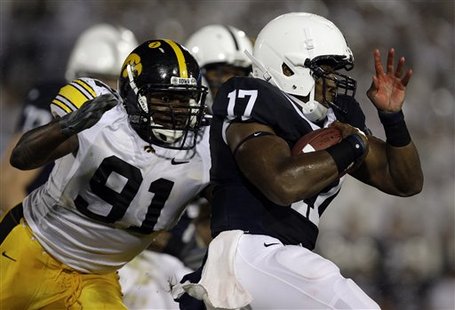 You knew this was coming.  Three and a half months ago our feature instigator Bama Hawkeye outlined a case against Penn State.  As he opined in his abstract "Most Pre-Season polls are showing Penn State as a Top 15 team. They're wrong..."

Not surprisingly, the article inspired its fair share of controversy.  But the bottom line is this: Bama was right.

Tonight's bright but soggy installment of Saturday Night Football was full of excitement.  A feral Beaver Stadium crowd danced under backlit sheets of rain -- a blinding white force of anxious enthusiasm, and later, bewilderment.  There's no question that Beaver Stadium can hold its own with any game environment at any level.  Watching in high definition on my Sony, I was treated to a high gloss symphony of color.  The Angelic-white of plastic fan ponchos, the bright green wet grass, the eight-ball black of skuffed-up helmets, and the blood red hands of ball carriers created a graphic novel live.

Early on it seemed as if the fifth-ranked Lions might shine on the national stage.  Ricky Stanzi threw behind an open receiver on third-down, and Penn State responded with a stunning 79-yard touchdown on their first play from scrimmage.  They stopped Iowa a second time, and drove the length of the field on a 20-play drive.  It was the last time they would threaten Iowa with more than an empty fist.

Early in their next possession commentator Brent Musburger said something that made the hair on the back of my neck stand up.  Penn State had just been called for holding, negating a beautiful Graham Zug layout catch for a first down.  "It appears," said Musburger, "this Penn State offensive front is having trouble containing Iowa's defensive ends."  It was a simple enough observation, but a grave omen.

In that moment, I remembered Bama's article.  Specifically, the fact that Penn State's offensive line lost three All Big Ten Selections, and had the least amount of returning line starts in the Big Ten.  I knew all of sudden that the Lions were in trouble.  Sure enough, once Iowa's front seven settled in, their fate was sealed.

Series after series, the Hawkeye defensive front waltzed into the Penn State backfield, the ease of which reminded me of a passage from my favorite American novel The Great Gatsby.

Dinner was announced; wedging his tense arm imperatively under mine, Tom Buchanan compelled me from the room as though he were moving a checker to another square.

Like great brooding patriarchs, Iowa's line consistently tossed its Nittany Lion counterparts aside, forcing Daryll Clark to throw under duress.  At one point, Kirk Herbstreit noted that Clark had completed 11 of 30 odd throws, 27 of which were under pressure.

Try as they might to fast-talk their way out of the stronghold, the talented Evan Royster, Zug, and Clark were just for show.  This circus belonged to the Hawkeye defense, and punter Ryan Donahue.

So what should a conference fan take from this?  It's a problem that will be back to haunt the Nittany Lions.  They don't want to hear it, but Ohio State has arguably the best defensive line in the country.

I also can't help but wonder if this isn't the kind of trouble that could have been fixed with a stronger out of conference slate.  Had Penn State faced a legitimate challenge prior to tonight's opener, they might have recognized the blocking disparity, and made offensive adjustments to compensate (e.g. zone read).

Yes, they really are the sleeper in the Big Ten, and we don't need Brent Musburger to tell us that.  Graham picked Iowa to go 9-3, I picked them at an ambitious 11-1, and Bama put them at 10-2.  When we asked a fellow SBN blogger if Ohio State or Penn State doesn't win the Big Ten who is the most likely to end up in Pasadena, they responded:

It's Iowa, and it's not even up for debate.

That was on August 20th, shortly after the media picked Michigan State third in the Big Ten.  A third of the way through the regular season the Hawkeyes are undefeated, and the Spartans have three losses.  Any questions?

Iowa will face stout challenges all the way out, with a visit to FROM Michigan in two weeks, back-to-back games at Wisconsin and MSU, and a date with Ohio State on November 14th.  They might struggle to defend the Wolverine spread, or get a taste of their own medicine from the Buckeye pass rush.

But the bottom line remains: the Hawkeyes are in control of their own destiny, and what happened tonight was no fluke.