Tougher Than the Rest

Share All sharing options for: Tougher Than the Rest

In 2003, after losing to the Iowa Hawkeyes for the second straight season, one of the defensive linemen for the Michigan Wolverines (and it kills me that I can't find the man's name) made a fantastic statement about the Hawks.  "I hate playing them, " he said.  "They're the bullies of the Big Ten."

All that I could think as I watched Iowa's front seven push around Penn St. for the last three quarters of Saturday Night's game, was that the Bullies were back.  As Kirk Herbstreit correctly noted during the broadcast, when Coach Ferentz has had his best teams, it's been seasons when the line play has been dominant.  It's beginning to look like this is one of those years. 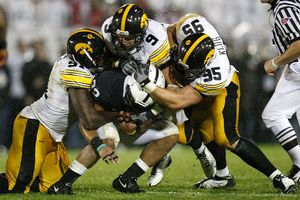 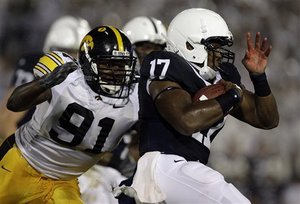 What follows is a look at some of the pretty amazing things that these Bullies of the Big Ten have been doing.

Here are five fun stats for you: 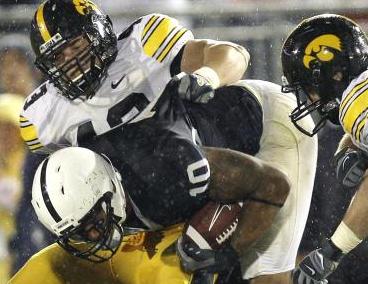 The defense has been awesome.  Amari Spievey has developed into the best corner of the Ferentz era.  The safeties, especially Tyler Sash, can ballhawk with the best of them.  The linebackers seem to be in on every play.  And the defensive line...do you remember that coming into the season, this was the question mark on the Iowa defense? As OPS noted at Black Heart Gold Pants:

There isn't a single starter on the line that didn't affect the game in a big way. Broderick Binns? 2.5 TFL, 1.5 sacks, and consecutive ownings of DeOn'tae Pannell that led to an Iowa safety (this sealed Pannell's fate; he was benched shortly thereafter).Christian Ballard? Probably the most consistent resident of the PSU backfield, and he tipped the last INT to A.J. Edds, effectively ending Penn State's hopes. Karl Klug? Multiple big plays, not the least of which was recovering a Penn State fumble in Iowa territory in the fourth quarter... a good 30-40 yards or so from his spot on the field at the snap. And Adrian Clayborn? Oh, only two tackles and O HAI GAME WINNING TOUCHDOWN K THANX. Among the four, they badgered their linemen, the PSU backs, and Daryll Clark into enough miscues that when it came time to reclaim the lead, the Penn State offense really had no chance down the stretch.

Further--not that removing data is a great way to bolster your point, but bear with us for one second--excepting the 79-yard bomb to Chaz Powell, and combining lost fumbles and INTs into a generic turnover stat, here's an average of what the last 3 starting QBs have accomplished against the Iowa defense: 8-22, 83 yards, 0 TD, 3 TO.

So where can this Iowa team go from here?  As every prognosticator and broadcaster has been contractually required to mention, Iowa faces the hardest road schedule in the Big Ten.  They have to travel to Madison, where they'll meet a rejuvenated Badger squad.  They have to travel to Michigan State, in a series where the home team has won every game since 1995.  They have to travel to The Ohio State University, to face a team that they have beaten four times since LBJ became President.  To put that in perspective, Iowa has more Big Ten titles than victories over Ohio State since 1963.  The home schedule looks more manageable, which is more of a statement about the road trio awaiting than the home games against Michigan, Northwestern, Indiana, and Minnesota.  So yes, the two-thirds of the road that remains looks difficult. 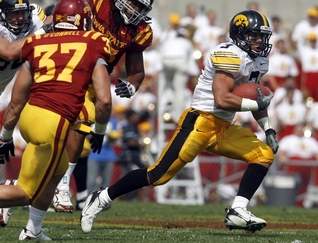