We, The Rivalry, Esq. place before this college football court, the 2009 season of the Iowa Hawkeyes.  The past 30 years of the program have seen three or four year crests followed by two or three year troughs.  Some have been more pronounced than others. This summer we have debated if this is the start of another crest.  I say to you, ladies and gentlemen of the college football jury, ENOUGH!  Let this court give them the fair assessment that they deserve. 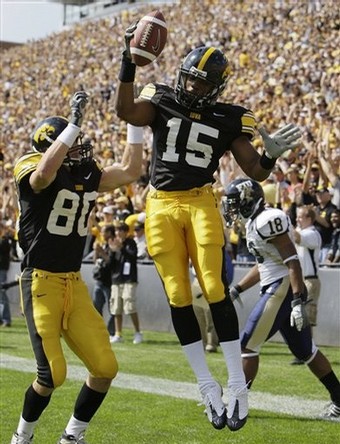 Sometimes commentators can make too much about  a "season turning on one moment."  Then the 2008 Hawkeyes go and give them every reason to use the phrase again.  Iowa was 5-4, having lost their four games by a total of 12 points.  Iowa was on the verge of having a fifth close loss pinned on them by Penn State.  And then...and then...

The 24-23 victory over the Nittany Lions flipped the switch for the Hawkeyes.  They held on and beat Purdue the following week, obliterated the Gophers to close down the Metrodome, and destroyed South Carolina in the Outback Bowl.  The 9-4 season was the best in four years and raised hopes for 2009. 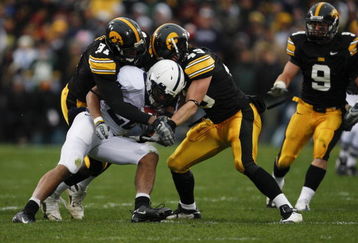 Iowa...The Most Interesting Team in the World

Reliving the 2005 Capital One Bowl

A. I Hate Iowa

Maybe its because he's lived too long in the South, where hatred is a tangible commodity, but Bama Hawkeye has felt his hatred for Big Ten rivals boiling.  Here's why he hates...wait a minute...

I don't hate the Hawkeyes.  Sure, there have been games that caused me to verbally explode at players, plays, and coaches...but never hate.  More than that, there is no reason for me to hate the Hawkeyes.  They are the embodiment of every principle upon which college athletics have been founded.  I dare say it would be wrong, nay, anti-American for you to hate them.

Unless you care about little things like not breaking the law.  Or unless you're Minnesota.  We haven't always been the best of house guests when we visited them.  And I guess that Penn State may have reasons to hate Iowa too. The Hawks did spoil their national championship and NCAA tournament hopes in the course of six months.  And I suppose that Iowa fans do belittle  treat the Wildcats with the appropriate amount of respect.  That may cause hatred in the JustNorthwestern fan(s?) out there.  But outside of them, let's be clear: hating the Hawkeyes is like hating all that is right with America.  You got that, Benn?  Good.

B. Why You Should Love Iowa

Because Hayden Fry ended the tyranny of the Big 2 when he led the Hawkeyes to the Rose Bowl in 1981...Because every year they find some otherwise un-recruited farm boy and turn him into an All-Big Ten lineman...Because not only do they dress like the Steelers, they run their organization like them too.  Two coaches in 31 seasons.  Only JoePa can scoff at that...Because they've won three of their last four against the SEC...Because their D-Coordinator has 8 toes...Because Nile Kinnick gave the best Heisman speech ever...Because they're in the Big Ten.

[ed. note: These picks were made before Jewel Hampton was declared out for the season with a knee injury.]

10-2 could well get the Hawkeyes to a BCS Game.  I think that they get passed over for second teams from the SEC and Big 12 as wells as Notre Dame and the Mountain West champion.  If this bowl game comes to fruition, my life could get a bit uncomfortable...

Words from an SBNation blogger on their team.  Oops Pow Surprise of Black Heart Gold Pants made one of my days happier this summer by comparing every Big Ten team to a professional wrestler.  About Iowa, he said this:

Widely praised for their technique and tenacity, which is enough to go far but not enough to completely overcome their athletic shortcomings. But if things go wrong? These guys tend to, um, "snap." And if they snap, things go horribly wrong. Some family troubles.