Share All sharing options for: 80 Reasons to Love the Big Ten - No. 2 - Nile Kinnick 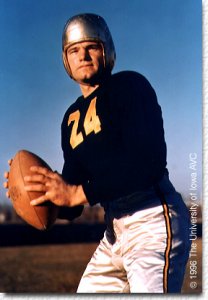 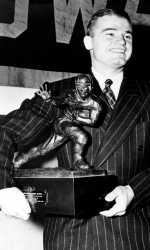 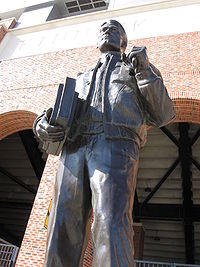 Yes, Nile Kinnick was a great football player.  He was the "Cornbelt Comet" from Adel, Iowa when he enrolled at his home state campus.  He and the team suffered through two lousy seasons in 1937 and 1938 (remember, Freshmen couldn't play).  Fortunes changed in 1939.  Under new head coach Eddie Anderson, the Hawkeyes finished 6-1-1, including a shocking victory over No. 2 Notre Dame.  It was in that 7-6 upset that Kinnick made his national reputation.  He intercepted the pass that set up his touchdown run.  For good measure, he kicked the extra point.

Kinnick was a halfback, but the definition of the position has changed greatly over the last 70 years.  In 1939, Kinnick threw for 638 yards and 11 touchdowns on only 31 passes and ran for 374 yards. He was involved in 16 of the 19 touchdowns (11 passing, 5 rushing) that Iowa scored and was involved in 107 of the 130 points that Iowa scored that year. He played 402 of a possible 420 minutes that season.  In essence, Kinnick at halfback in 1939 was like playing the Tebow position - if Tim Tebow also played starting cornerback, kicker, and punter.

At the end of the season, Nile Kinnick won virtually every major award in the country. He was a consensus First-Team All-American, and he appeared on every first team ballot to become the only unanimous selection in the AP voting. He won the Big Ten MVP award by the largest margin in history. He also won the Walter Camp Award and the Maxwell Award. Nile Kinnick even won the Associated Press Male Athlete of the Year, beating out such notables as Joe DiMaggio, Byron Nelson, and Joe Louis. He was the first college football player to win that award. On November 28, 1939, Nile Kinnick was awarded the Heisman Trophy. To date, he is the only player from the Iowa Hawkeyes to win college football's most prestigious award.

But, Nile Kinnick was a better man.  Born the grandson of a governor, Kinnick was as intelligent and popular as he was athletic.  His classmates voted him student body president his Senior year.  His Heisman speech not only thanked his teammates, but addressed the growing threat of war in Europe.  After hearing the speech, Bill Cunningham wrote in The Boston Globe, "The country is OK as long as it produces Nile Kinnicks. The football part is incidental."  He graduated with honors in 1940, and turned down a five-figure contract to play in the NFL.  Instead, he enrolled at the University of Iowa's Law School.  It was always anticipated that he would be in elective politics. After listening to him address a political rally, the Marion, Iowa Sentinel announced that it was endorsing Kinnick for President in 1956 - the first election in which he would be eligible to run for the office.

Kinnick completed his first year of law school.  Then, in August of 1941 (four months before Pearl Harbor), Nile Kinnick realized that war was imminent and joined the Naval Air Corps Reserve.  As he wrote to home

There is no reason in the world why we shouldn't fight for the preservation of a chance to live freely.  No reason why we shouldn't suffer to uphold that which we want to endure. May God give me the courage to do my duty and not falter.

On June 2, 1943, Kinnick was flying a training mission from the U.S.S. Lexington off the coast of Venezuela when he experienced an oil leak. Rather than try a dangerous landing on the Lexington and endangering personnel, he attempted an emergency landing into the Caribbean.  Although a boat arrived on the scene within eight minutes, and rescue parties searched for several hours, Kinnick's body was never found amid the oil slick. Nile Kinnick was 24 and the first Heisman winner to die.

Iowa sportscaster Tait Cummins said, "Kinnick proved one thing, that college athletics could be beautiful. Everything that can be said that is good about college athletics he was. He didn't represent it...he was it."  The Big Ten agrees.  That's why every time that you watch the coin toss at a Big Ten football game, Nile Kinnick is the face that represents heads.  There are countless men born in Iowa, or by Iowans, who carry the name Nile as a first or middle name.  The University of Iowa named its stadium after Kinnick and erected a bronze sculpture of Kinnick the student outside its gate.  It seemed more appropriate than just paying tribute to Kinnick the athlete.

"Thank you very, very kindly, Mr. Holcomb. It seems to me that everyone is letting their superlatives run away with them this evening, but nonetheless, I want you to know that I'm mighty, mighty happy to accept this trophy this evening.

Every football player in these United States dreams about winning that trophy, and of this fine trip to New York. Every player considers that trophy the acme in recognition of this kind. And the fact that I am actually receiving this trophy tonight almost overwhelms me, and I know that all those boys who have gone before me must have felt somewhat the same way.

From my own personal viewpoint, I consider my winning this award as indirectly a great tribute to the new coaching staff at the University of Iowa, headed by Dr. Eddie Anderson, and to my teammates sitting back in Iowa City. A finer man and a better coach never hit these United States, and a finer bunch of boys and a more courageous bunch of boys never graced the gridirons of the Midwest than that Iowa team in 1939. I wish that they might all be with me tonight to receive this trophy. They certainly deserve it.

I want to take this grand opportunity to thank collectively all the sportswriters, and all the sportscasters, and all those who have seen fit, have seen their way clear to cast a ballot in my favor for this trophy. And I also want to take this opportunity to thank Mr. Prince and his committee, the Heisman award committee, and all those connected with the Downtown Athletic Club for this trophy, and for the fine time that they're showing me. And not only for that, but for making this fine and worthy trophy available to the football players of this country.

Finally, if you will permit me, I'd like to make a comment which in my mind, is indicative, perhaps, of the greater significance of football and sports emphasis in general in this country, and that is, I thank God I was warring on the gridirons of the Midwest and not on the battlefields of Europe. I can speak confidently and positively that the players of this country would much more, much rather, struggle and fight to win the Heisman award than the Croix de Guerre.