80 Reasons to Love the Big Ten - No. 1 - Greatest Rivalry in All of Sports

Share All sharing options for: 80 Reasons to Love the Big Ten - No. 1 - Greatest Rivalry in All of Sports

Two and a half months ago I debuted this list to chronicle the color, history, and pageantry of a conference near and dear to my heart.  We've covered galloping legends, Presidents in uniform, and the chorus of victory.

We've learned that ours is a league filled with incomparable, 14-0, dynasties.  A proud and awesome Union for the ages.

Eleven programs and seventy-nine entries later, it's time to add one final notch to our belt.

No. 1 - Greatest Rivalry in All of Sports 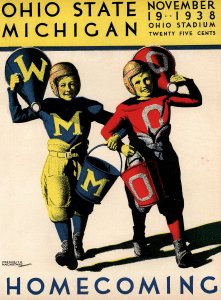 Ohio State/Michigan is the greatest rivalry in all of sports.  No other contest shares the same fusion of competitiveness, unrest, and devotion.  In putting the Rivalry on top of its list of The 10 Greatest Rivalries ESPN noted:

But why is it the Greatest?  As NBC's Mike Celizic describes:

The Yankees and Red Sox are a pretty intense rivalry, but how often are both teams very, very good at the same time? Lately they have been, but not historically. The Lakers and Celtics were this good for a generation, but that, too, ended. In the NFL, rivalries ebb and flow with the constantly churning rosters.

I heard Dick Vitale the other day on ESPN radio saying that as good as Ohio State-Michigan is, Duke-UNC in hoops is better. Far be it from me to suggest that Dickie V might inadvertently slip into hyperbole when a sport he seems to favor is being discussed, but he’s missing it on this one.

The Blue Devils and Tar Heels play at least twice a year, often three, when you count the ACC tournament. And, while the games are fiercely contested, when they’re over, both teams usually go to the NCAA Tournament along with 63 other teams, all with the same shot to win the national title. You can’t play two or three times a year with none of the games being the difference between life and death without losing something.

That’s what elevates Ohio State-Michigan beyond the other great rivalries — the teams get one shot at it and there’s usually something really, really big at stake. If it’s not a shot at the national title, it’s the difference between a BCS bowl and a consolation bowl. It’s usually also for the Big Ten title, a distinction that means a great deal in the Midwest.

I'll be the first to admit, lately things have slipped a bit.  Michigan is perhaps the worst it has been in 130 years.  Ohio State, meanwhile, is demonized by extracurricular losses.  Neither of these items change the fact that for eight decades, Ohio State and Michigan have consistently ruled the conference roost.  No other would-be challengers can say that.

From the people, to the passion, the Rivalry from which we borrow our namesake is sine qua non.