Ohio State Struggles - Is it the End of the World?

Share All sharing options for: Ohio State Struggles - Is it the End of the World?

With the 3:30 games finished, and a half hour until Saturday Night Football, I'm taking a quick break from the action and thought I'd go on the record with a few thoughts about No. 6 Ohio State's narrow escape from Navy. 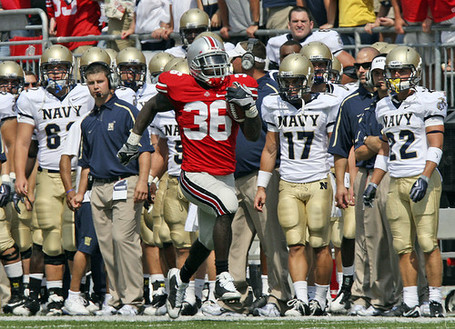 It almost goes without saying that this was a disappointing showing.  The Buckeyes were tepid on offense, and surprisingly inconsistent on the defensive side of the ball.  Today's struggles will inevitably re-frame next week's contest with USC.  Especially, since (by the final score) the Trojans didn't appear to miss a beat, rolling San Jose State 56-3 with a true freshman behind center.

Does this scenario sound familiar?  The scarlet struggles to put away a lower tier opponent (Ohio) a week before an epic collision with an elite power.  Meanwhile, Pete Carroll's guys play fast and loose.

Should Columbus be concerned?  Yes.  But this afternoon's performance isn't the end of the world.  Here's a bullet point summary of what I saw from the South Stands.