I LOSE IT, SNAP, OVER-REACT... about the Gophers

Share All sharing options for: I LOSE IT, SNAP, OVER-REACT... about the Gophers

(a recreation of a post I wrote at Gopher Football Blog)

The best part about the Gophers season opening game against Syracuse on Saturday?

It's over.  If the game had ended with anything but a Gopher win, I would have sounded like The Champ.

I was so pumped for Gopher football on Saturday I could barely sleep on Friday night.  Jeffrick and I were donning our Gopher gear (shorts, t-shirts, hats), the Molson Canadian was cracked and we were ready for some football!

I wish that level of excitement had stuck around, because there wasn't much to cheer about for most of the game.

But like I said, it's over, and we win.  But mostly, it's over (and we won), and thank goodness, because I do not think that I can hear one more word about Greg Paulus.  HOLY CRAP!  I mean, I get it, he hasn't played competitive football for 4 years, and he played college basketball under Coach K at Duke, and he really learned about preparation and pressure, and he really learned how to lead, and he's quite a young man, and he's quite impressive, and he really seems to have a command of what he's trying to do out there, and he sure is playing well, and he's really giving these fans something to cheer about, and he was the Gatorade High School Player of the Year, and he's just having a great time out there, and boy can he keep the play alive with his scrambling ability, and gosh, and oh golly, and gush, gush, gush.... PUUUUUKE!

Let's cut the crap here: the Gophers looked horrible, and the Orange (the team, not the fruit) was in this game ONLY because the Gophers couldn't get a lick of offense going for 3 quarters.  The 14 points that the offense mustered in the first half had more to do with the defense and the special teams than it did with the offense.

Now, I will give Paulus his due: he looked pretty good considering the circumstances.  (By the way, this might be a good time to mention, did you know that Paulus played basketball at Duke?  Yeah, he was a point guard under Coach K!  How about THAT?!?!)

As for the Gophers, I was highly disappointed with Adam Weber for at least 3/4 of the game, and he should personally plan on buying a cold root beer for every member of the defense because the fact that the defense made the adjustments that it did and held the Orange (the team, not the fruit) scoreless in the second half is the only reason the Gophers even had a chance to win this game.

And let's not forget Eric Ellestad.  Weber might want to go ahead and buy that young man a burger and some fries to go with that root beer because while everyone this morning seems to be talking about how Weber really put it together at the end of the game when it counted, I'm here to remind you that it was Eric Ellestad who saved this game for the Gophers.

The chatter over at The Daily Gopher during their live game thread had a lot to do with Weber.  While some folks were highly disappointed with Weber early and often, and were calling to see some snaps to MarQueis Gray, some had more issue with the play calling and the offensive line.  While both were certainly to blame, I still had more issue with Weber.

At this point I'd like to again remind you that I am happy the Gophers won.

As a third year starter Adam Weber did very little (and I'd go with the word "nothing" for 3 quarters) to help the Gophers win this game.  As a team the Gophers should be able to look to Weber for leadership and play-making when the going gets rough.  Instead, Weber added to, and in a lot of ways, orchestrated the rough going.  While many people like to talk about how Weber fought back to help the Gophers move the chains at the end of the game, it seems that most people fail to remember that Weber also happens to be a big part of the reason that the Gophers were in the position to need to come back in the first place.

Weber was most-egregiously inaccurate, but outside of that he also continued to force the ball, continued to not check down his reads and throw exclusively to his first option, and, in my opinion, looked like he was generally, if not lost, at least, confused.

With due respect to Weber, there were also clearly other things that did not go well during this game.

The defense had some major lapses in the first half, specifically the blown coverage and/or safety bite on the Paulus (who went to Duke... he was a point guard there) pump fake late in the first quarter.

The offensive line was still a big issue as well.  Juco transfer Jeff Wills, who is as big as a bus, looks like he might be suseptible to the speed rush (thank you Brandon Sharpe for making this known).

I also had quite an issue with the play calling, which was less than creative. It seemed as though Jedd Fisch didn't have a good grasp on when to stick with the run in order to establish it, and when to mix it up in order to throw off the defense.  Despite having a rusher with a 4.9 yards/carry average (Duane Bennett) and a quarterback who was having trouble hitting the broad side of a barn (I'll admit, that was harsh), Fisch failed to establish a running attack in this game, rushing only 29 times, compared to 42 throws.

I do realize that the 42 throws are skewed by the fact that the Gophers were trying to get down the field in a two-minute drill type of offense in the 4th quarter, but that does not diminish the fact that a running game that we have consistently heard about since last December was never established, despite signs that it could have and should have been during this game.  If you want to keep the ball out of the hands of the Orange's most dynamic player, Paulus (who played basketball for Duke), then you need to keep him off the field.

But there were some positives here as well... and this seems like a good time for me to remind you of just how happy I am that the Gophers found a way to win this game.

First of all, this is the kind of game that past Gopher teams would have given up on, and lost.  I've seen it.  It was good to see the team not give up.

And since I just spent several paragraphs bar-b-queing Adam Weber, I need to point out here that, despite a poor game overall, and despite being inaccurate throughout the game, Weber did make plays when the game was on the line.  And there is definitely something to be said for that.

The defense made fantastic adjustments in the second half.  The Gophers gave up no points and only 38 yards the entire second half half.  38 yards to an offense lead by the second coming of... some other person who played basketball and football in college, Greg Paulus (who played basketball for Coach K, but was high school all-american in football).

Eric Decker was... well, Eric Decker.  What else can you say?  If people don't think this guy is the best receiver in the Big10 (apologies to Benn), and Top 5 in the country, then I am shocked.  Can you imagine what his numbers would have been on Saturday if Weber would have been just a bit more accurate? 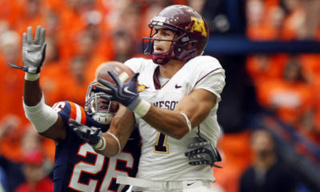 Look, I want to be very clear here, I am VERY happy that the Gophers escaped The Carrier Dome (a dome named after a company that makes air-conditioners... that ISN'T air-conditioned) with a win. A win is always good, and I can't imagine the venom I would have spewed had the continued the poor play and lost the game.  But I think all Gopher fans expected a better, more crisp showing, and I believe rightfully so.  This is a team that is older and more experienced, with veteran leaders at the major positions.

All in all, the old adage holds true, a win is a win.  We're happy to have the W, but we'll need to see a lot more from the Gophers if they expect to win any more games this season.