Starting today and running through the end of January, we'll be unpacking the Big Ten season, and profiling a decade in review.  To kick things off we'll take a look at 2009's memorable milestones, starting with September. 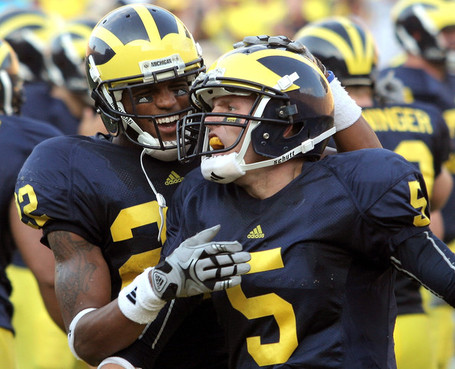 It's interesting, but when I think back to a particular year in college football, it's not the winning streaks, the rankings shuffle, or the race to the finish I remember.  It's the moments.  It's almost as if after a champion hoists the crystal football, my recollection of the season splinters into thousands of split-second impressions.

My answers are as follows:

2005: Ryan Hamby drops a touchdown pass, No. 4 Ohio State loses to No. 2 Texas 25-22; Troy Smith has a coming out party against Notre Dame in the Fiesta Bowl, puts up 617 total yards of offense; Vince Young scrambles on Fourth and Five with 19 seconds remaining to beat USC in the national championship.

2006: Antonio Gonzalez pivots and reverses field on one-hand, runs for a 30 yard touchdown in top-ranked Ohio State's 38-13 defeat of No. 13 Iowa; Jarvis Moss blocks an extra point in No. 6 Florida's 17-16 defeat of South Carolina; Chris "Beanie" Wells runs 52 yards for the breakout touchdown in the Game of the Century; Ted Ginn Jr. runs back the opening kickoff and breaks his ankle celebrating in Ohio State's nightmare 41-14 BCS National Championship loss to Florida.

2007: No. 5 Michigan inexplicably loses to Appalachian State; No. 1 LSU falls in triple overtime to unranked Arkansas, Pat White injures his thumb and watches his team lose 13-9 to Pitt, costing No. 2 West Virginia a trip to the national championship; Rich Rodriguez promptly departs for Michigan; Ohio State falls ass backwards into the national championship game despite losing its second to last game; Michigan triumphs against No. 12 Florida in Lloyd Carr's final game.

2008: Michael Crabtree stretches to catch a pass and jail breaks for the endzone as Texas Tech upsets No. 2 Texas with a second remaining.

I'm willing to bet we thought of a few of the same things.  So the question becomes: what will Big Ten fans remember about 2009?

After the jump, I identify the biggest game, best win, worse loss, and biggest moment for the month of September.

Biggest Game: No. 3 USC at No. 8 Ohio State (18-15)
Ohio State put on a near perfect defensive showing, keeping the Trojans and freshman quarterback Matt Barkley pinned against the shadow of their uprights the entire second half.  But the Buckeye offense couldn't put the game away, and Jim Tressel's lack of confidence and questionable playcalling cost the scarlet its revenge in an 18-15 loss.

Best Win: No. 18 Notre Dame at Michigan (34-38)
Although both teams would turn out to be duds, Tate Forcier showed tremendous maturity as he led Michigan to a game winning touchdown with 11 seconds remaining in regulation.  Charlie Weis' decision to pass twice, after getting the ball back at his own 43 with 2:13 on the clock, saved Michigan its timeouts -- and re-ignited the burner on his hot seat.

Worse Loss: Missouri vs. Illinois (37-9)
Nothing, and I mean nothing went right for the Illini in this season opener from hell.  Juice Williams was embarassingly ineffective as a pocket passer, Arrelious Benn and Jason Ford missed the second half with injuries, and a Mizzou team that was supposed to be in re-building mode completely overwhelmed Illinois.  It was a sign of things to come for Ron Zook's squad. 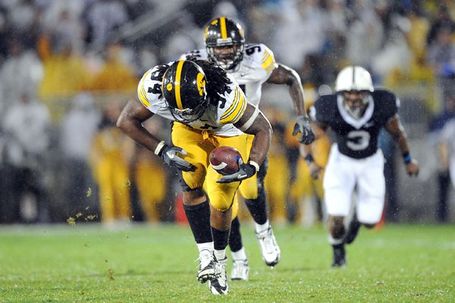 Clayborn's punt block against Penn State established Iowa as team to beat in the Big Ten.

Unranked Iowa was trailing No. 5 Penn State in Happy Valley 5-10 in the Fourth Quarter, and had been largely ineffective on offense when Adrian Clayborn blocked a Nittany Lion punt and returned it 53 yards for the go-ahead touchdown.  The play swung the momentum of the game, and broke Penn State's resolve.  Iowa would go on to dominate the remaining 12 minutes, and decisively upset Penn State for the second year in a row, 21-10.