Earlier this week we looked back at the moments that mattered in September and October.  We chronicled a Top 10 upset that sprang new hope in West Lafayette, an overtime victory for the Spartans, and a last-second touchdown snare that gave Iowa its first 8-0 start in the program's 120 year history. 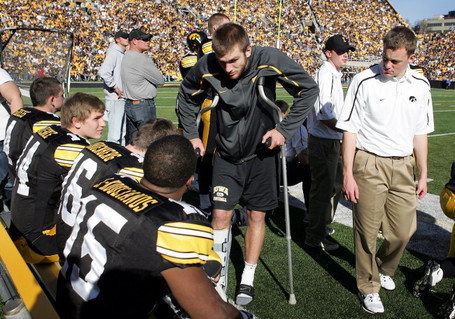 Just another injury.  Not.

We've finally made it down the stretch.  Dawn tailgates are surrounded by a glittering blanket of frost.  Cleats crunch on frozen field turf.

This is November in Big Ten Country.

Here are the games, wins, losses, and moments we can't help but remember.

In the de facto Big Ten Championship Game a Stanziless Iowa, fresh off a loss to unranked Northwestern, visited Columbus to face an energized Ohio State squad, motivated by a 24-7 trouncing of Penn State in Happy Valley.  Redshirt Freshman Quarterback James Vandenberg played his heart out, and the Hawkeyes overcame a 14 point deficit with just over 11 minutes left to tie game at 24 points.  An anticlimactic stalemate ensued, as both Kirk Ferentz and Jim Tressel seemed content to try their luck in overtime.  Iowa's fortune ran out after Ohio State's defense forced an incompletion, and 16 negative yards, taking the Hawkeyes out of field goal range.  Ohio State's backup kicker Devin Barclay, a former pro Major League Soccer player, floated a 39-yard field goal between the south endzone uprights to secure a Buckeye victory, and the Big Ten title.  Ohio State's Rose Bowl birth would be the school's first since 1997. 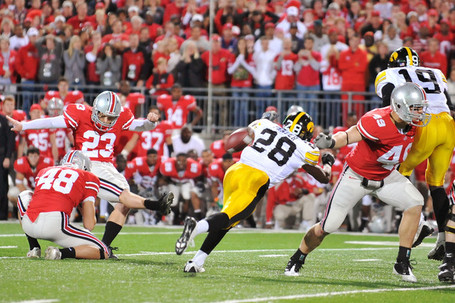 Ohio State's Devin Barclay connects on a 39-yard field goal in overtime against Iowa to cement the Big Ten Championship and a Rose Bowl birth.

Although No. 16 Ohio State's air raid at No. 11 Penn State deserves honorable mention, the Wildcats of Northwestern earn the title of best win for the month of November.  Mike Kafka's arm buoyed the purple to a 27-14 halftime lead, but a 68 yard punt return by Wisconsin's David Gilreath brought the Badgers back within three.  Wisconsin had numerous opportunities in the final stages of the game to re-claim the lead, but turnovers sealed their fate -- John Clay fumbled with 1:44 left, and Scott Tolzien threw an interception to put the final nail in the coffin.  Fans poured from the stands onto Ryan Field as Northwestern punctuated its regular season with an upset, the purple's third win in a row.  The victory convinced the Outback Bowl committee to take the Wildcats over the Badgers to play on New Years Day.

Northwestern's first win over a Top 10 opponent in five years came on a shocking afternoon in Iowa City.  The Wildcats scored twice on turnovers to seal the deal.  Field goals, and stout defensive play, allowed backup quarterback Dan Persa to maintain momentum after Mike Kafka left the game with a hamstring injury.  But that's not all... 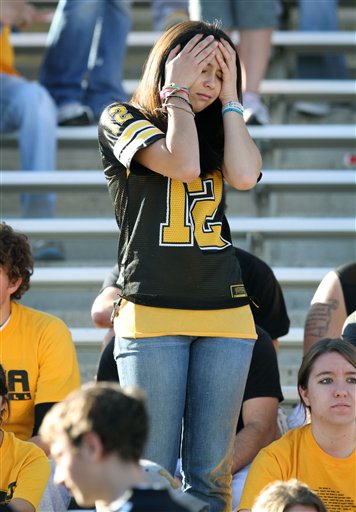 It was just one of those days...

Leading Northwestern 10-0 in the second quarter, and with the ball deep in its own territory Iowa's Ricky Stanzi dropped back on an apparent bootleg into the end zone.  Northwestern's Corey Wooton skated unimpeded around the blind side, connecting with Stanzi's wasteline and forcing him down onto the turf.  His body flexed one way.  His ankle, the other.  Stanzi let go of the football, and Marshall Thomas fell onto it for the defensive touchdown.  The home town crowd watched in disbelief as their star was carted of the field and into the locker room for preliminary X-rays.  Stanzi would return to the sideline, on crutches.  Iowa's magical run, and national championship aspirations would end.  Stanzi wouldn't play again until the Orange Bowl.