We'll go in order of finish this year, from Tress to Lynch. Big Ten coaches were improved in some aspects this year, such as installing working passing games, but a few coaches have shown so little improvement you wonder how they keep their jobs sometimes.The biggest question in rating the 2009 coaches - How much credit should a head coach get for having one of the best defenses in the nation? 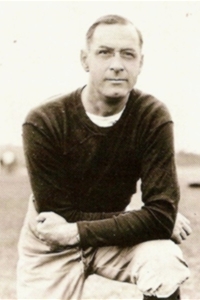 Fritz Crisler is glad that he never was subjected to The Rivalry, Esq.'s grading system.

Adaptability and Gameplanning: Tress, even in the wake of a horrendous offensive performance v. USC, didn't make any offensive changes. It was the same misshapen, non-cohesive attack, one that inspired many to question aloud if Pryor was being misused. But after the the Purdue trainwreck, things done changed. The zone-read run finally was used to get Pryor out wide and Jimmy T finally realized that Troy Smith wasn't his quarterback, instead rolling TP out of the pocket and giving his biggest weapon easier reads. But kudos to Tress, even if the changes came late, they did eventually take shape. My favorite stat:

Discussion: Last year, JT turned the reigns over to TP quickly and I gave him his due. This year, defensive brilliance made Jimmy's conservative gameplans seem smart as the season wore on. The coup de grace, of course, was smashing the high powered Oregon attack with ball control and typical bend-but-don't break defense. I'm always conflicted on grading Tress because I always believe he's too conservative and yet he always makes alterations that eventually pay off.

Adaptability and Gameplanning: Ferentz was forced to make changes all year because God hates Iowa skill players and because of early suspensions. These moves weren't seamless, but his team refused to lose until NW took advantage of a Ricky Stanzi injury. In came Vandenberg and there went the winning streak, but I will always respect how Ferentz put JB into the fire against OSU (20-33, couple of touchdowns) and almost came away with a win. Iowa never panicked either, not against OSU, PSU or even Indiana. And I won't be one to criticize KF for going conservative against the Buckeyes at the end of the game.

Discussion: In 2008, I chided Ferentz/O'Keefe for being too conservative. In the Orange Bowl, it seems they listened to me a bit. Iowa noticed early that crossing routes and rollouts were shredding the Yellowjackets. So what did GT get a healthy dose of? Crossing routes and rollouts. Kudos to Ferentz and staff for continuing the development of a skull-crushing defense and understanding their player's limitations.

Adaptability and Gameplanning: It's really hard not to judge Penn State and all of it's coaches on the two losses. This was such a transparent team - talented to the max defensively, but easily overrun on offense v. solid teams. But our own Bama Hawkeye predicted 4 PSU losses, basing his idea on the loss of so many offensive starters. Joe and Jay Pa trusted their own system enough to avoid the upset/letdown losses and the Spread HD continued to be undeniably successful.

Unfortunately, BSD and everyone else could have used better gameplanning against Iowa and OSU. If you're getting beat up front early and obviously, something needs to change. If you're down 10+ points late in the game, you shouldn't be running off-tackle right to Royster.

Discussion: In 2008, a veteran Penn State team and a new offensive system gelled perfectly and JoePa looked like the perfect figurehead: adaptable and wily. Though 11-2 is no disappointment, whoever was diagramming and calling plays this year didn't seem to fully understand the negative effect of a green offensive line.