Summation: Iowa in the Aughts

Share All sharing options for: Summation: Iowa in the Aughts

This continues our series recapping the last ten seasons in the Big Ten.  This starts the review of the individual teams. 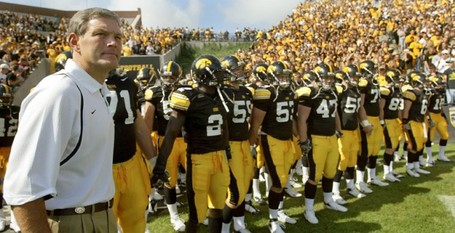 On January 1, 2000, it would have been hard to envision a more successful decade for the Iowa Hawkeyes. Coming off Kirk Ferentz's first season, a 1-10 (0-8) season, there were few reasons to dream big.  And then, things fell into place.  After one more losing season, the team made the Alamo Bowl in 2001.  2002 provided one of the most incredible joy rides that the school has ever known - ending with an 8-0 conference record, a Heisman runner-up, and a trip to the Orange Bowl.  The Hawkeyes were back.  The three year run from 2002-04 saw three top ten finishes, something the school had never accomplished before.  The next three years were ones of increasing disappointment, as Iowa failed to live up to their increased expectations.  But, just as the bottom seemed ready to drop out, Iowa rallied for a strong 2008, a remarkable 2009, and designs on concluding another strong three-year run in 2010.  It wasn't a perfect decade, but for Iowa, it may have been one of the two best in the school's history.

Yeah, there is good stuff to come, but let's suffer the medicine before we get to the sugar.

Coming off of three top ten finishes, Iowa started the 2005 season ranked number 11. There was every reason to believe that this might be a Big Ten Championship (or even - shhhhhh - a national championship) caliber team. They moved up to number 8 after a thrashing of Ball State.  Then, they headed to Ames to play the state's red-headed stepchild.  Iowa State won that day.  No, that doesn't tell the story.  Iowa State dominated the Hawkeyes that day.  They knocked out Drew Tate, who was starting to morph from cocky leader into cocky punk, and rolled to a 23-3 victory.  It would be 2009 before Iowa would see the Top 10 again.

It's 2000, and it's really not that close.  The 2007 squad can make an argument, but there is a difference between 3-9 and 6-6.  That said, the 2000 team in the second half of the season - after a safety we'll mention later was inserted into the lineup - showed promise.  They played defending Big Ten champ Wisconsin close, beat Penn State, and upset Northwestern - a victory that kept the Wildcats from making a trip to Pasadena.

October 4, 2008.  After a loss in East Lansing to Michigan State, Iowa fell to 3-3.  The school had repeatedly been embarrassed by the number of arrests over the prior two years. 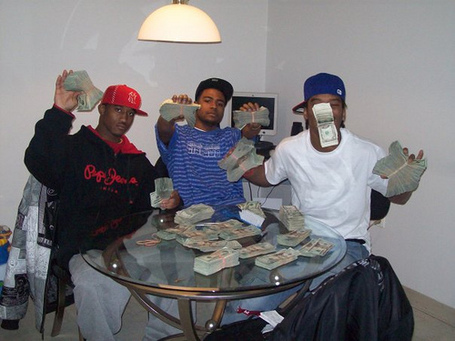 The arrests were only outnumbered by columnists who wrote about the disparity between Kirk Ferentz's contract and his team's performance.  The team missed a bowl the year before after a listless performance against a MAC team on the final Saturday of the season.  It was looking like we could be in for a repeat in 2008.  If you were a stock picker, you would have been wise to call bottom right then.  The climb began the following week in Bloomington, IN. I'll let you know when it stops.

And here comes the good stuff.

The wins over Penn State in each of the past two seasons have been incredible.  I'm also a big fan of Iowa's 6-4 Penn State victory in 2004.  But, the re-emergence of the Hawkeyes as a legitimate Big Ten contender occurred on October 26, 2002.  Iowa and Michigan, both undefeated in the conference, met up in Ann Arbor.  The #13 Hawkeyes led the #8 Wolverines 10-6 at half.  As Kirk Ferentz was running off the field, Holly Rowe stopped him for an interview.  She asked if he was concerned at all, because Iowa had also led Michigan at half the previous year in Iowa City.  "No," he smirked, "we're a better team this year."  One question - interview over.  Iowa would outscore Michigan 24-3 in the second half.  The 34-9 loss was the worst Michigan defeat in Ann Arbor since 1967 - that's pre-Bo Schembechler.  Iowa had arrived. 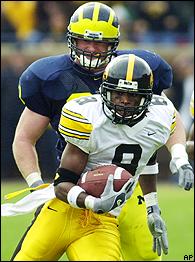 CJ Jones takes in a 39 yard touchdown in Ann Arbor.

In the end, the undefeated Big Ten season of 2002 is too much to overlook.  Plus, I don't know that any of the three Iowa teams would have fared any better against that USC wrecking crew that was beginning its seven year streak of Pac-10 titles.

February 5, 2005.  Iowa had just stunned LSU in the Capital One Bowl.  It would mark the third consecutive season that Iowa finished at #8 in the final polls.  The team had just won two Big Ten titles in the last three seasons.  Chad Greenway had announced that he would return for his Senior year to anchor the defense.  Drew Tate, the Big Ten's leading passer during his Sophomore season, would have two more seasons to lead the Hawks.  Even better, Coach Kirk Ferentz had put the NFL rumors to bed again.  He really did want to stay in Iowa.  On this date, the Hawkeyes also roped in a Top Ten recruiting class - the most highly decorated in the school's history.  If Ferentz could "coach up" the lesser-regarded players that he had recruited over the previous six years, what could he do with these stars? The following season would begin with greater expectations than Iowa had seen since 1991.  It was a great day to be a Hawkeye.

And as a footnote, if January 6, 2010 fell in the last decade, I could make a great case that the program is stronger now than it was then.

We need to mention Adrian Clayborn's blocked punt in Happy Valley, the Stanzi-McNutt touchdown in East Lansing, and Daniel Murray's kick in Iowa City.  But the play of the deacade occurred on January 1, 2005.  This clip cuts in as the play starts.  What is important to realize is that the Hawkeyes had two timeouts and completely botched the clock management of the drive.  It never should have come down to this.  But, I'm so glad it did.  And I'm so happy to share Gary Dolphin's radio call with you.

Let's see, Iowa won the award for best quarterback (Brad Banks), best running back (Shonn Greene), best kicker (Nate Kaeding), best offensive lineman (Robert Gallery), and best tight end (Dallas Clark).  So why am I not picking one of them?  Because no player more epitomized the Hawkeyes of the Aughts than Bob Sanders.  This human wrecking ball instantly changed Iowa's defense. 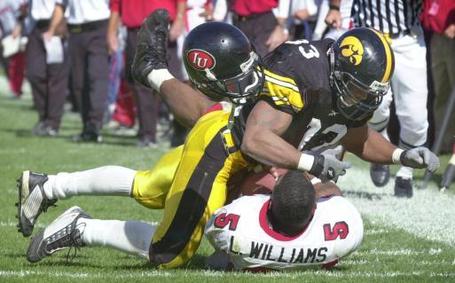 He was lightly recruited out of western Pennsylvania.  He was too short to be a star.  And yet, from the time he earned playing time, he dominated the field.  He was inserted into the starting lineup before the Wisconsin game in 2000.  Iowa held the defending Big Ten champs to 13 points.  They would upset Penn State and Northwestern in the following two weeks. Iowa's defense had its swagger.  The unit grew tough.  Bob Sanders was a big reason why.

It's great to look back at where they've been.  But where are the Hawkeyes headed now?  2010 is a huge season for Iowa.  Expectations are higher than any season since they started the 1985 season as the preseason #4.  As we look ahead, it is fair to expect a decade much like the last one.  There should be a couple of seasons in which Iowa competes for the league title and gets to a BCS bowl.  It is fair to also expect a few seasons in the 7-5 or 6-6 range. The big questions will come when the coaches start to leave.  Ten years from now, you can't expect Kirk Ferentz, Ken O'Keefe and Norm Parker to be together, can you?  How Iowa adjusts to those inevitable changes will decide the fate of the program going forward.