Summation: Minnesota in the Aughts

Share All sharing options for: Summation: Minnesota in the Aughts 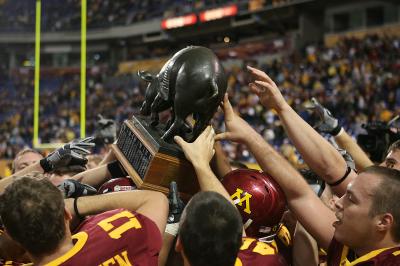 Be sure to check out Bama Hawkeye's Iowa Summation.

When looking at how the Gopher Football program faired during the first decade of the 21st Century, it's almost a Tale of Two Expectations scenario.  An outsider looking at the program, and the program's history, would probably believe that the Gophers did a serviceable job in the Oh's.

A further look reveals that the Gophers only once managed a winning record against the conference, and a 30-50 record overall against Big Ten foes the 0's.  It was a serviceable decade to the outside, but to the insider, it felt like we should have accomplished much more.

This discussion starts and ends with 2007.  Yes there were other poor years, but this overshadows everything else.  The situation was simple, Tim Brewster took over the program and turned over the entire staff, which is certainly his right.  This changed everything that the Gophers were doing schematically.  The Gophers went from a run-first offense to a spread team with the wrong personnel.  Defensively the Gophers were just a mess in 2007.  The schemes were new, and the talent wasn't there to support... well, anything really.

There's plenty of blame to go around for this season, so I'm not going to lay any of it, but it's fair to say that the talent level that Brewster needed to accomplish what he wanted to do wasn't there, and the coaching ability that he would have needed had the talent been in place already wasn't developed yet either.

No question... October 10, 2003 to Michigan.    The game was moved to a Friday night due to a Twins playoff game.  I was sitting in the lower bowl, end-zone of the Metrodome.   Losing that game sort of felt like going out with a really, really hot girl who you never thought you had a chance with, but then getting kicked in the giblets at the end of the date.  You got to roll with her, and you held your own for awhile, but in the end, you just ended up broke and swollen.  Worse yet, it happened in front of all of your buddies, so you can't even lie about it.

I walked out of the Metrodome that night and the only thing that was on my mind was the 5 beers and ¼ bottle of Jack that were still in the cooler in my Blazer.  I was in total shock.  In relation to sports experiences, it was the single worst experience of my life.   In terms of overall "this sucks" life experiences, it easily cracks my top 10, and if I really thought about it, I could probably make a case for a Top 5 finish.

Here's just a short recap so that I don't have to run myself into a wall later: 20th ranked Michigan walked into the Dome undefeated to face the 17th ranked Gophers.  The implications for a Gopher fan could not have been bigger.  Short story shorter... the Gophers gave up 31 points in the 4th quarter to lose 38-35.

Many Gopher fans feel like that single game was a turning point.  If the Gophers had won that game, it could have catapulted us to a different level... instead the Gophers struggled through the rest of the decade.

Honorable mention: North Dakota State at the Metrodome in 2007.

October 8, 2005 @ Michigan.  The Wolverines, ranked 21st in the country, hosted the Gophers and it's safe to say that nobody gave the Gophers a shot to win.  The Gophers simply do not win at The Big House, but on this day, they pounded the ball, had two 100+ yard rushers (Maroney & Russell), and found a way to hold off the Wolverines for easily the biggest win of the decade.

On a personal note, my uncle and cousin were at the game, while I was in pre-marital counseling that day (they give you a discount on your marriage license in Minnesota if you go through something like this, otherwise, you know... I wouldn't have done it.  I would have been the model husband, even without it.  Which leads me to...)  I only saw the last quarter of the game as my soon-to-be-wife got a glimpse of what being married to me might be like (yelling at the TV in a bar, high fiving strangers, ignoring her... followed by tears and loud phone calls from my cousin). 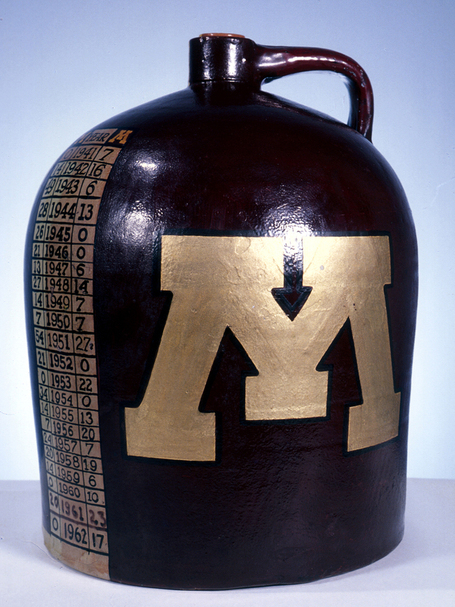 2003...  and it's not even close.  The only Gopher team with double-digit wins, and a winning conference record.  Glen Mason really out-kicked his coverage this season and managed to set a new benchmark for Gopher football.  We finally thought we knew what kind of Gopher team should be the norm.  Anything above this mark would be gravy, anything below, a disappointment.

It's funny that the worst loss of the decade came during the Gophers best season... that, in a nutshell, describes Gopher football in the oh's.  But even after losing to Michigan, followed by a let-down to Sparty the next week, the Gophers finished the last third of the season 3-1, losing only to Iowa, and then went on to beat Oregon in the Sun Bowl.  The Gophers were ranked 17th in the final USA Today/Coaches Poll.

This is going to come as a shock to you... heck, it came as a shock to me, but as I thought back over the 00's, I couldn't think of a bigger point in the decade for the Gophers as a program, not just on the field, than the day that Glen Mason was fired.  The day Mason was fired was the day that Athletic Director Joel Maturi and University President Robert Bruinicks said enough is enough... we can be better than this.

Now, the results of that decision are questionable, but the act of making that decision was big for a university that hadn't been relevant in football in 3 decades.  It would have been easy for Maturi and Bruinicks to stick with the status quo, keep winning 6-8 games every season, never really compete for a Big Ten Championship, and go to a lower-tier bowl game every year.  Instead they risked the backlash and decided to try to move this program to a new level.  Again, the results are still in question, but simply making that decision was a big deal for this program.

Now I know, I'm going to get bar-be-que'd by many Gopher fans for not mentioning the opening of The Bank... and they are right, that was certainly a highlight.  And while that move took the maneuvering of not just the university, but also the legislature, it didn't speak to a change in total philosophy by the athletic department or the willingness to take a major risk the way that firing Glen Mason did. 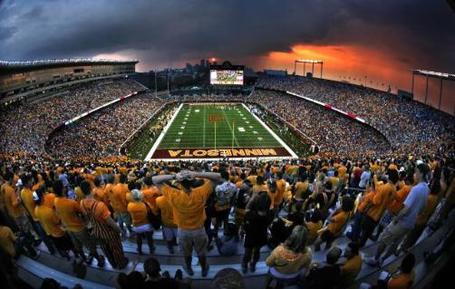 V. Player of the Decade

Several directions to go here, but all of them point to offense... which, if you had only watched the Gophers the last two years is probably a shock to you, but believe me, until 2008 this was a purely offensive team with an offensive defense (pause for laughter).

I'm going with what may not be the consensus among Gopher fans as the player of the decade, but this is my article, so I get to choose... you'll get over it.

Marion Barber III.  MBIII is the 4th leading rusher in Gopher football history with 3,276 yards, a 5.7 yards/rush average, and he was First Team All-Big Ten in 2003.  But my favorite thing about MBIII was how he ran.  He absolutely ran through and over people, instead of trying to go around anyone.  He wasn't the fastest back on the field, but he was always the toughest.  He is my favorite kind of player to watch.  The things that he does for the Dallas Cowboys today, are the things that made Marion Barber III successful at the University of Minnesota.

I've gotten very cynical about Gopher football, and I realize this, but I am a Gopher fan through and through, despite the ups and downs.  The 0's were a tough time for Gopher fans.  Coming out of the late 90's it felt like we might be on the verge.  2003 provided a glimpse of what we were capable of, but the rest of the decade felt like a lot of ups, followed by punches in the stomach.

I still want to believe that this program is going in the right direction, and I still want to believe that Tim Brewster is the right person to lead it.  Everything that Brewster is doing off the field with recruiting, training, etc, are the right things, but it hasn't translated onto the field, and that is the only thing that really matters.  Brewster will be given one more year to prove that he and his (fragmented and oft-changing) coaching staff can translate that newly recruited talent onto the field.

Having said all of that, I don't have a lot of confidence that Brewster can lead that translation.  I've been kicking this around a lot, and while he's done great things in increasing the talent level at Minnesota, he should be winning with that talent and winning now.  Like I said above, he'll be given another year to prove it, but I have my doubts.  I don't have any problem with Brewster on a personal level, and the venom that many have spewed toward him isn't in me.  I have serious doubts about Tim Brewster's ability to do what he needs to do from today forward to push this program along, but I would love to be proven wrong.