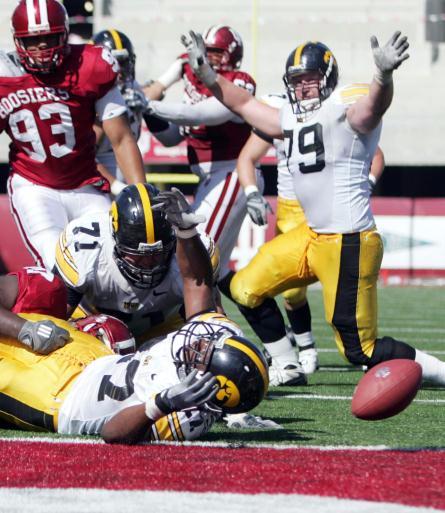 Weaknesses: Not quite strong enough, not a great pass blocker.

Discussion: Didn't shock anyone by leaving for the NFL, but it felt like a warm Iowan hug everytime you knew he was starting at tackle, so he will be missed. My favorite Bulaga moments? Iowa would be killing clock at the end of games and O'Keefe would call run after run on Bulaga's side. Tired DL's would cave in game after game in 2009. See GT, Indiana, PSU. And on the edge of your screen you would see big #79 pushing someone out of the way, finding some poor linebacker on the second level.

The second biggest compliment an offensive lineman can get is being called "a mauler." It means BB possesses a mean streak and the ability to not just block someone, but destroy them too. Joe Thomas, now an All-Pro OL, then an All-American at Wisky, is probably the best comparison because they have the exact same body type, have already grasped the fundamentals of offensive line blocking, and possess the physical tools to dominate defenders.

The injury this year didn't affect a single thing, draft wise. After adjusting to game speed, it seemed that BB was back to his 2008 self. Most draftniks mention the injury, but not in a overly negative light.

Mocking the Draft, in one of their many mock's, have mocked Bulaga to the Seahawks with the 14th pick. That would be a instant need filling pick. OT's go quickly in this draft and the other studs to possibly go in front of BB are:

Here is the latest mockery, 20th to the Texans. That would be a perfect fit for BB - a solid passing game exists in Houston, while Bulaga could improve there horrendous run game. I get the feeling he's going to go earlier though - there isn't a single part of his game that worries scouts and I think people will get a bit excited over mauling run-blockers after seeing another Iowan, Shonn Greene, succeed behind a powerful Jets O-Line.