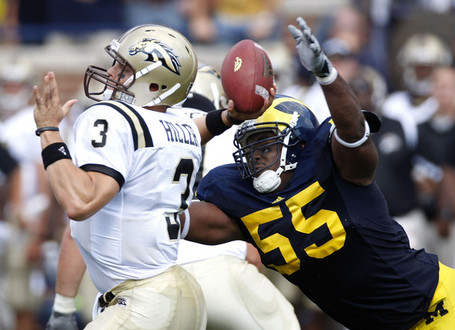 Weaknesses: not prototypical size for an NFL defensive end, thirst for blood of tyrants.

Discussion: The secret is out: I worship Brandon Graham. BG had an incredible senior year despite the awful supporting cast. After a junior year where Graham netted 20 TFL (2nd in the nation) and 10 sacks, his senior year was even better: 26 TFL, 10.5 sacks, 2 blocked punts, 1 glorious defensive TD.

Despite being considered undersized (how somebody can be 263 and undersized is beyond me), BG is an all around terror. His strength and speed in the pass rush are exceptional, and his patience that he's developed in the run game consistently had teams running away from him this year. He's got a great bull rush, and he never stops going until the whistle. Whomever gets this guy is getting a gem of a player.

Aside from his being a complete monster, BG is the definition of a true Michigan Man. Knowing that he would be surrounded by inexperience and an overall shoddy defense, BG decided to stick around for the good of the team. And he was even better. This is the kind of guy you want on your team. He's a leader that can pitch a tent in the opponent's backfield. What more could you ask for?