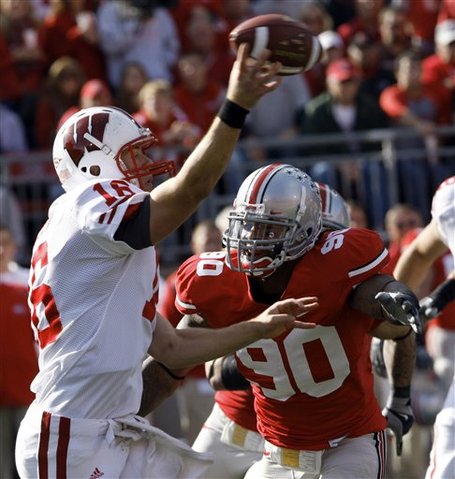 Weaknesses: Too small (is everyone too small?), no hype, overshadowed by teammates

Comparisons: Any undersized DE who was athletic enough to move to LB...Uhh...

Discussion: Gibson began the season at OLB, but moved to DE and broke out with some nice TFL's and four sacks. Overshadowed by his own teammates and the other DE's in the Big Ten; let's be honest, this was an absolute bumper crop of DE's, real live NFL DE's playing college ball. Graham, Kerrigan, Gibson, Clayborne, Binns, Kirlew, Middleton, Wootton, and my personal favorite, O'Brien Schofield.

Has added a solid 30-35 lbs to his frame since high school. This tells me he can keep adding weight if a team finds a need for DE. Everyone and their mother is claiming Gibby will be an OLB though - his combo of speed, size, and athleticism will be perfect for a 3-4 system. I always like seeing high school specs - 400 squat, 325 bench, vertical 35...and all on a 205 lb frame.

As Law Buck pointed out, everyone knew he was gone after this year, but we can only surmise why. Maybe a combination of OSU's success, his impending graduation in June, and the fact that outstanding athleticism will get you upped on draft boards quickly.

Brand new Mock has him in at 4th round...CBS has him as the 12th best OLB. Everyone feels like his size and agility is NFL-ready, but he's not really got the name recognition of the LB's ahead of him. However, his status as a) an OSU linebacker who B) has no widely-known character or work ethic issues will help keep him in 4th - 5th round projections.