Summation: Indiana in the Aughts

Share All sharing options for: Summation: Indiana in the Aughts 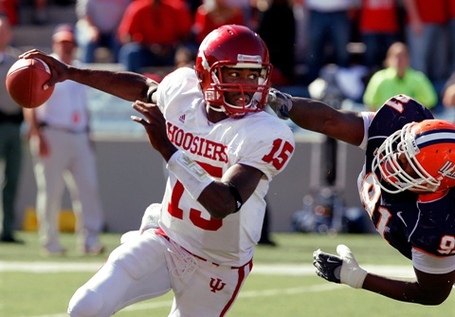 Cam Cameron and Gerry DiNardo presided over this Crimson and Cream mess at the start of the decade and quickly gave way to Terry Hoeppner, whose renewed spirit brought some life to The Rock until he was felled by cancer. Bill Lynch inherited Terry's talent (and passion) and brought post-season play to the Hoosier masses before quickly falling back to the Big Ten's bottom.

If I was writing a cliched ridden script, it would include pointing at the above pictured Kellen Lewis and claiming his struggles and successes were typical of Indiana football in the Aughts. But...they weren't. Lewis presided over the only winning season of the decade.

Is there an issue here that needs to be resolved? Does some kind of cleansing process need to take place for IU to win some football games? I doubt it. The defensive talent is almost always lacking in Bloomington as top recruits find their way to bigger profile programs. The student body, basketball crazy as always, find their way to tailgate outside of Memorial but not actually into the stadium. And until increased talent meets decent coaching, the Hoosiers will remain at the bottom of the barrel.

I'll try to tone down the negativity, but woo eee...

2009, an odd year in Indiana football, saw some definite highlights - additions onto Memorial, Ben Chappel's arm, Bill Lynch showing some real emotion. It also included two losses that should not have been losses; the 36-33 Michigan loss and the 42-24 Iowa loss.

How do you feel about an improbable late game Wolverine score and a controversial interception that sealed the game? Indiana dominated this game, putting up 467 yards and throwing the kitchen sink at the inept Michigan D. An 85 yard TD run by Darius Willis put the Hoosiers ahead and it looked like Indiana could beat Michigan for the first time since 1987. The 15 game losing streak would reach 16 though - a Hoosier blitz on 3rd and long was picked up and Forcier won the game with a 28 yard toss to Martavius Odoms.

When a program sucks, that's one thing. But when scandals or unmet expectations make for losing years, that's when Programs see their darkest day. Fresh off a bowl berth, the '08 Hoosiers were supposed to be an intriguing and talented team. As former IU coach Lee Corso says, not so fast, my friends. An early injury and upset loss to Ball State signaled that maybe IU would just be...IU again. Five blowouts would be peppered throughout the season and the momentum gained from Hoeppner's recruits was lost.

The 2007 win over Purdue did so much and brought so many positive things together. Emotion over Hoeppner's death had built up and the Hoosiers knew a win would vault them into the postseason. End of the year rival Purdue stood in the way. This led to the Play of the Decade below and hell, the Program high point also. 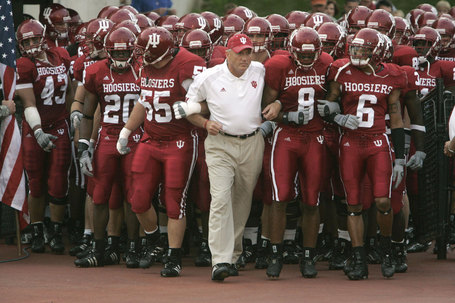 Who would you rather have - the explosive 2001 team that scored 63 points against Wisconsin or the 2007 team that willed its way into a bowl game? I'll take James Hardy, Tracy Porter, a dominating Greg Middleton, and of course 2nd Team All-Big 10 quarterback Kellen Lewis. Even kicker Austin Starr made his way onto an All-Big 10 team.

One reason I loved this Indiana team was their star power. Who didn't want to see Kellen Lewis dance and dive around the field, only to whip a perfect spiral to the NFL-ready Hardy? Where did Middleton come from and how did this unknown DE lead the Big Ten in sacks?

This field goal launched Indiana into a place they hadn't been for years - the postseason! Jane Hoeppner was standing on the sidelines and I think some of the Memorial Stadium crowd jumped onto the field. Hugs, tears, and one really clutch field goal.

Antwaan Randle El, no question. First Team All-American, a matchup nightmare for every opponent, record setting team leader who pushed a bunch of sprightly nobodies to some good performances...So what if he never had a winning season? Randle El parlayed his one-man wrecking ball success into an NFL career and a Super Bowl title. He was also a member of the 40-40 club; 40 rushing touchdowns and 40 passing touchdowns.

Let's talk about Bill Lynch, who will NOT and should not be fired for bad performances by IU. He gameplans well, he is fired up over coaching IU (or fakes it damn well), and most importantly, he understands the limitations of his players and program. Recognizing that he had the tallest receivers in the 2009 Big Ten, Lynch ran effective slants and jump balls that played to their tremendous size. Recognizing that Indiana football is somewhat of a laughingstock, Lynch plays the excited coach bit without being a douchebag (Brewster). Lynch's gum-throwing tantrum after the controversial Michigan interception earned some instant respect from me.