Wait, when did Terrelle Pryor learn to throw?

Share All sharing options for: Wait, when did Terrelle Pryor learn to throw?

It appears that in the time between beating Michigan and playing in the Rose Bowl, Terrelle Pryor somehow learned to throw the ball accurately. As a Michigan fan, this terrifies me.

With the high accolades coming in (#1 recruit in the country, next coming of Christ, etc...) TP's illustrious Ohio State career has been what many, including myself before the Rose Bowl, would call a complete disappointment. Replete with subpar play, apparent inability to learn the offense even in his second year, lack of any semblance of progress in the passing games, and several Tressel-forehead-slapping public gaffes (including my personal favorite "everybody... kills people."), it looked like TP was better suited for the accolade of all-time biggest bust. And I was enjoying every savory minute of it. 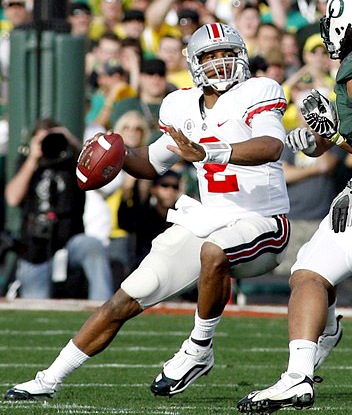 It was obvious that the kid was athletic as hell. He is the proud owner of the most punishing stiff arm in college, and he caused all opposing coaches's anuses to constrict when he pulled down the ball on a broken play. But, simply put, TP could not throw for beans. After scorning Michigan for tOSU on the recruiting path because he wanted to play in a more NFL-ready-style offense, it was looking like that decision was gloriously blowing up in his face. He looked completely inept in the passing game, and Jim Tressel was beginning to feel the heat from the critics, which included TP's high school coach who said Tressel should take the cuffs off.

Then the Rose Bowl happened. Let me give you the stat line: 23/37, 266 yards, 2 TD's, 1 INT. If you told me that Jim Tressel let Terrelle Pryor throw the ball 37 times, I would have told you to call me when you got back to reality. TP didn't even throw enough passes to qualify for a QB rating in several of the games he played in this year. Not only did TP have an impressive stat line, he looked impressive doing it. He threw several difficult back shoulder passes, one of which was dropped. His touchdown pass to DeVier Posey in the fourth quarter was as perfect a ball as I have ever seen him throw. Though he still looked like he was dry-heaving the ball every time it left his hands, he was dry heaving it directly into his receivers' hands with downy-soft touch. Don't get me wrong, he still occasionally looked like the Pryor of old, overthrowing the openest of the open and hanging the ball out while scrambling like it was a used diaper. However, he showed signs of significant improvement in the passing game in the Rose Bowl. This does not look good for the rest of the Big Ten.

Against Michigan, TP ran a few zone read plays with bone-chilling efficacy. Imagine him being actually able to throw the ball: Robo-Pryor. As one of TP's biggest critics, I still refuse to admit that he's worth the hype. Besides, I've never actually admitted to a mistake. I am a Michigan fan after all. But he's certainly got my attention now. I'm not of the camp that wishes that he came to Michigan. Besides, his overall grasp of the english language, the name of his own school (THE University of Ohio State *Jim Tressel forehead slap*), his murder-supporting ethics, as well as his occasional propensity for skirting that pesky "law" is more befitting of Columbus, Ohio (or, I don't know, prison) than Ann Arbor, MI. But the prospect of having to play against him for two more years (unless of course he declares for the NFL early, shows up out of shape, then gets arrested for trying to rob a bank) is not an appealing one if this improvement continues.

Vince Young wasn't THE Vince Young until his junior year when he lead the first of many big-stage late-game heroic comebacks against Meech in the Rose Bowl. Might we see the same from TP in his junior year? God, I hope not.