Pat Angerer looked like he was having fun tonight, smashing into GT's big backs and leading the Hawkeyes to an Orange Bowl win. 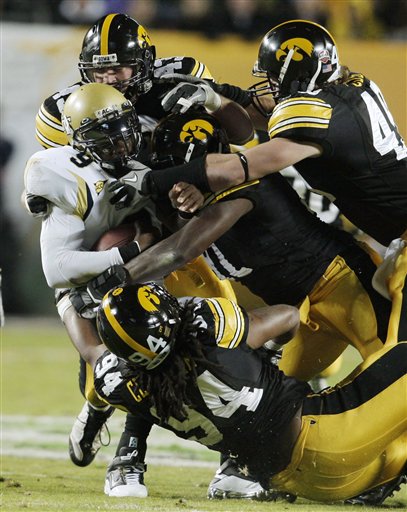 He wasn't the only person having a whole lot of fun this bowl season though; anyone who had taken guff for last year's 1-6 bowl record, any Buckeye fan tired of losing big games, any 315 lb. lineman who read articles about his own lack of speed...All those people truly enjoyed the physical dominance exhibited.

Georgia Tech has faster athletes than Iowa, but couldn't counter the toughness and maturity of the Iowa linemen. Oregon's lightning fast offense and defense couldn't phase the bigger Bucks. Wisconsin's 50 lb. advantage on the O-line protected Scott Tolzien and paved the way for John Clay. And Penn State met a talented LSU team and came out on top thanks to a defense filled with NFL-caliber players.

Saying "I'm satisfied" won't describe my thoughts toward these four wins. I'm not even one to get caught up in the Big Ten Is Disrespected thing, but I do enjoy seeing some of the Midwest's best teams play up to their potential on a national stage.

Let me pull up a couple interesting points.

Is the Big Ten on an upswing? Wisconsin, OSU, Michigan, MSU, NW, Indiana, Iowa...All going to be excellent or improved next year.

Was this the beginning of national relevance for the Big Ten? We're probably the 2nd best conference in the nation - or at least even with the Big 12 (Nebraska, Texas, Oklahoma, TT...all impressive teams). Not a bad situation, especially with the Pac 10's supposed rise. (h/t Elliot)

Boo...yah. I'm happy for all the teams that won and for MSU and NW, two teams who played incredibly hard and avoided embarrassment (for MSU fans, that sentence should read more embarrassment). I'm happy for our OPC pick em competitors, who showed faith in the Big Ten by picking a 5-2 bowl record. I'm happy for Pryor, who exorcised demons. I'm happy for seniors who had never won BCS/bowl games. Not a bad life, I'd say.

Should I be, as they say, acting like "we belong"? For this tradition laden conference, probably. But it's been a dry spell, it's been one too many annoying and cliched driven articles. So let's celebrate.