Perceptions, Perceptions: Why the Big Ten wasn't favored in all of its bowl wins

Share All sharing options for: Perceptions, Perceptions: Why the Big Ten wasn't favored in all of its bowl wins

An esteemed ESPNer said the Big Ten would go 1-6 this Bowl Season, with Minnesota being the only lock for a victory. This comment, especially to me and the people who watched Big Ten football in 2009, seemed especially uneducated (Minnesota? Really?). But it was understandable - the commenter didn't do research and simply based his picks on perceptions, built up over the last three yeas. Let's talk about a couple of those ideas.

Wisconsin v. Miami: The Badgers had run the ball versus everyone...except OSU and Iowa. The MSM took one look at this matchup and made a snap judgment - Wisky will be stuffed by the speed of Miami FL's miniature linemen and LB's because they can't run against big time teams. Oh, and Miami's wide receivers would run their crossing routes right by the Wisky secondary, because, uh, Wisconsin CB's have to be slow, right? 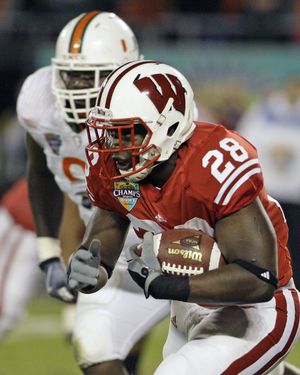 Whoops. Here's what a closer look would have revealed: Wisky had a balanced offensive attack that exhibited more imagination than a Badger squad has probably ever shown, full of reverses and great comeback routes from the WRs. The offensive line, while massive and slow, had a definite identity and played together well; they were also injury free. Wisconsin's defense, meanwhile, had tremendous speed from the outside pass rush (NFL, meet O'Brien Schofield), great size from JJ Watt, and a secondary that was tremendously improved from 2008.

The perception of Wisconsin as a plodding Sherman Tank that can be defeated by simply running around it was wrong. Someone with nuanced coverage of football would have seen this game for what it was - a great matchup between a sporadically brilliant Miami team and a steadily powerful, but well coached and talented Wisky team.

Ohio State v. Oregon: The MSM and Vegas listed the big O as a favorite. Intriguing - and that can be totally based on perceptions of OSU's failure in BCS games and the Buck's apparent aversion to playing speedy teams. Also, 2009 is a year where Pac 10 v Big 10 = Pac 10.

A more nuanced look, and kudos to LawBuck for choosing OSU in the OPC pick em, would have shown a hot OSU team, overrunning good offenses of any variety on the strength of one of the nation's best defenses. The more in-depth look would have shown that Tressel was truly learning how to use Pryor, rolling him out of the pocket where he doesn't have to make NFL style throws and can freelance more.

Penn State v. LSU: Vegas and Joe Sixpack were at odds here, which confused BSD and everyone else around these here parts. LSU featured a horrendous offense with no identity and yet were expected to score more than a cohesive PSU team that had only struggled against two Top 10 teams. I still remember Verne Lundquist telling everyone his thoughts for who was #1...It went like this:

And I said, hmm, LSU isn't even a Top 10 team, much less Top 5. So while Vegas was making the Nittany Lions a favorite, Joe Sixpack was picking LSU at something like an 80% clip. Perception won out here - the LSU athletes MUST be so much better, they can surely overcome their obvious deficiencies to defeat a Big Ten team that hasn't played anyone.

Iowa v. GT: Anyone who watched this game knew Iowa was the better team from the onset. It was comical, watching the big linebackers not have to play pass defense, instead being asked to just go up and hammer some poor Yellowjacket RB. "What, you're telling us we don't have to worry about pass coverage? Oh. Ok. Well. I'll just be smashing someone over there. Great. See you out there."

So why was Iowa not favored? Three main issues. First, Iowa plays in the Big Ten. Second, Iowa's QB had been injured and people were unsure of how Stanzi would react to Morgan and the athletic Yellowjackets. Third, Iowa plays in the Big Ten. Stuffing the run games of, well everyone they played, doesn't necessarily translate to stuffing the run game of GT.