Opening BCS and Big Ten Bowl Projections for the 2010 Season

Share All sharing options for: Opening BCS and Big Ten Bowl Projections for the 2010 Season

Wait, isn't it too soon?  Not on the internet, baby! 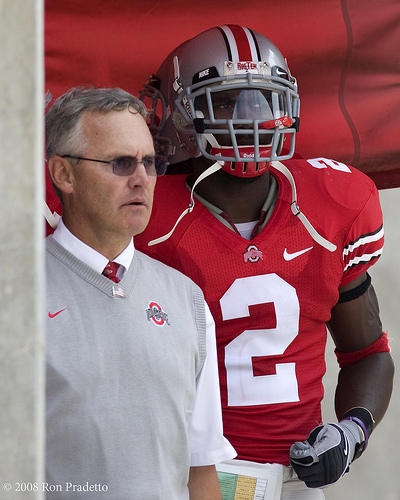 Guess who's back?  Back again.

Sure, some teams haven't even finalized their schedule.  Yes, there are a number of early-NFL-entry decisions to be made.  No doubt I'll have changed my mind before the start of the 2010 season, but here is our starting point.

Before we start, I want to place an emphasis on the RULES FOR 2010.

Let's emphasize number 3 a bit more.  If Ohio State (or Wisconsin...or Iowa...) runs the table and qualifies for the BCS Championship game, the Rose Bowl WILL NOT be able to pick the Big Ten runner-up to match against the Pac-10 champion (like it did with Illinois in 2007 and Michigan in 2006) IF (and only if) there is a non-BCS conference team in the Top 12 of the final BCS standings.  Had this rule been introduced in 2006, Boise State would have played USC in the Rose Bowl, not Oklahoma in the Fiesta Bowl.  Had the rule been introduced in 2007, Hawaii would have played USC in the Rose Bowl, not Georgia in the Sugar Bowl.  This will happen ONLY THE FIRST TIME that both a) the Rose Bowl loses a Pac-10 or Big 10 team and 2) a non-BCS team finishes in the Top 12 of the BCS standings.
Got it?  Good.  Let's get on to the projections.