The Road to Pasadena - The Numbers Don't Lie, Unless They Do

Share All sharing options for: The Road to Pasadena - The Numbers Don't Lie, Unless They Do 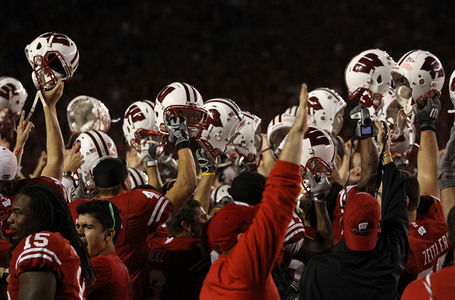 Brilliant win aside, it won't be easy for Bucky to reach the Rose Bowl.

On Saturday Wisconsin didn't just upset the No. 1 team in the country, it shook up the reigning status quo in a conference that has seen Ohio State win at least a share of six consecutive titles.  While some commentators see this as a reason to drop the Big Ten a spot in the weekly conference rankings, I think it's a testament to the league's core grit.  After all, isn't it the dog-eat-dog phenomenon that propelled the SEC to the top of college football's pecking order in the first place?  Double standards aside, even Buckeye fans like myself are salivating at the prospect of a multi-dimensional conference race.  No fewer than six teams have a shot at capturing the league's automatic BCS bid (two of whom are in the driver's seat).

As such, let's take a subjective, and highly-sensationalized look at the teams in the running, in reverse order of their chances of making it to Pasadena.

But first thing's first.  The rules.  Although these antiquated tiebreaker provisions will partially go the way of the dinosaur when the league adds its twelfth member (Nebraska) in July, they just might enjoy one final hurrah this November if the conference race ends in a two or three way tie.  As Adam Rittenberg explains:

Some fans still think the team that had the longer Rose Bowl drought goes to Pasadena, which is ancient history. If two teams are tied, head-to-head meeting is the first tiebreaker. If there's a two-team tie and the teams didn't play each other, the first tiebreaker is better overall winning percentage. If the winning percentages are identical, the team with the higher rank in the final BCS standings wins the Big Ten's automatic BCS berth. If there are three teams tied, here's how it works:

Here's how I compiled the list.  I went through the schedules of the six Big Ten teams with a single loss or less and assessed their chances of winning the remaining conference games on their schedule.  I then assigned (a highly subjective) percentage value to each and calculated the average.  For teams that can't win the conference without help (like Ohio State and Wisconsin), I incorporated the chances that the teams they need to lose, lose.

No, the formula isn't perfect.  It's about as statistically sound as the BCS standings.  Still, it's a good opportunity for a big picture discussion.

Last but not least: Don't get too excited about the total scores.  They don't reflect a team's overall chances of making it to Pasadena.  Rather, they're an expression of that team's chances compared to the other five contenders.  In other words, Purdue doesn't have a 40.7 percent chance of playing in the Rose Bowl.  They have by far the worse chance of the six Big Teams with a single loss or less.

Assuming Purdue wins out, they'll still need an Iowa loss.  Their best bet for a "white knight" is Michigan State, who I give a 50 percent chance of beating Iowa on the road. 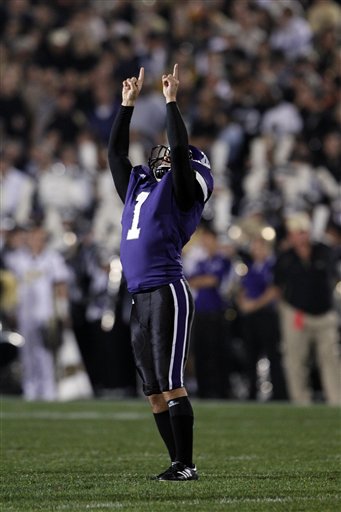 If they win out, they'll need Purdue to lose twice -- which shouldn't be a problem.  They'll also need Ohio State to lose again.  There's a 55 percent chance of that happening when the Buckeyes head to Iowa City on November 20th.

Like Purdue, Wisconsin's toughest remaining game is this week at Iowa.  Despite Bucky's near flawless performance last week, I give the Badgers a 45 percent chance of winning.  Go ahead.  Cry foul.  Then see South Carolina's loss to Kentucky for an example of how teams play the week after they dominate the top-ranked team in the country.

Now, I know what you're thinking.  How in the heck does Wisconsin have less of a chance to make it to Pasadena than Ohio State who they just crushed?  I'll tell you how.

Even if Wisconsin wins out, they'll need Michigan State to lose twice.  Otherwise the Spartans will own the head-to-head victory in a two way tie.  Although Iowa has a 50 percent chance of beating the Spartans, there's no one else on their schedule who appears to even be close.  The next best bets are rooting for either Northwestern or Penn State to pull an upset.  I give both a 35 percent chance of happening. 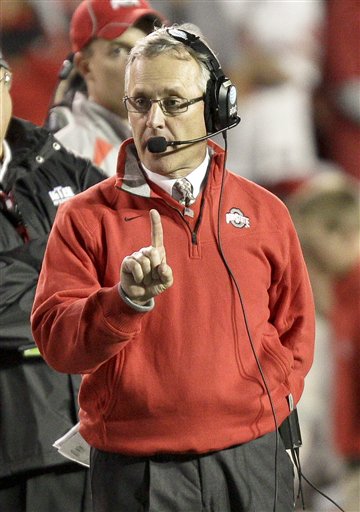 If you're not outraged, you haven't been paying attention.  Ohio State, yes, Ohio State has a better chance of making it to Pasadena than the team that just wiped the floor with them.

Sleep on the scarlet at your own risk.  While they certainly got punched in the mouth in Madison, they're still one of the more complete contenders in the Big Ten -- and they have a reputation for playing their best in November.

Win those, and I'm 90 percent sure they top Minnesota at TCF Bank Stadium Kinnick North.  I'm sure Gopher Nation would be thrilled to see the Hawks smell the roses on their home turf.

Iowa is the first Big Ten team that's in control of its own destiny.  But it's not the only one. 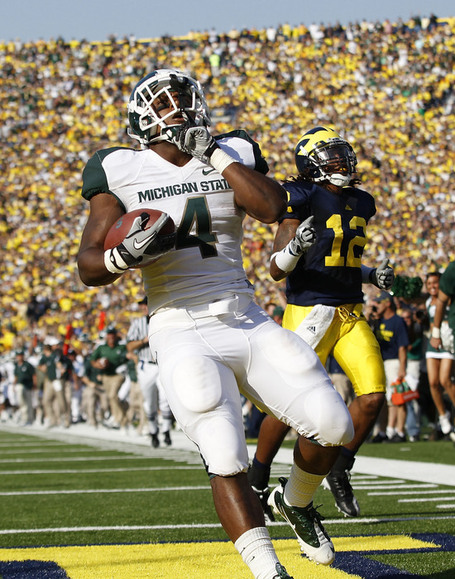 Michigan State has the right to snub the rest of the Big Ten.

According to my formula, the Michigan State Spartans currently have the best chance of making it to Pasadena.  Let me say that again: Michigan State is in pole position to reach the Rose Bowl for the first time in 22 years.

Like Iowa, the Spartans are in control of their own destiny.  If they win out, they'll win the Big Ten outright, and capture its coveted automatic BCS bid.  They'll also have an outside chance of playing in the BCS National Championship game.

I give the Spartans a 65 percent chance of beating Northwestern this weekend.  They'll then play for all the marbles against Iowa in the de facto Big Ten Championship Game.  (I'm split 50/50 on that one).  Michigan State has a 90 percent chance of beating Minnesota, and gets a bye week before playing Purdue (70 percent likelihood of a win) and Penn State (65 percent likelihood of a win).

So what do you think?  Does this pecking order make sense to you?

[Update: Be sure to check out DanTrueBlue's slightly more straightforward account of the Big Ten race.]