Share All sharing options for: The End Game - Predicting the 20 Most Likely BCS National Championship Matchups 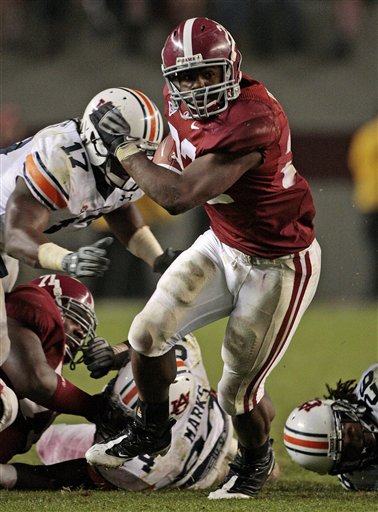 It's no secret who I think is in the driver's seat...

Sixty-six degrees and calm skies means I'm back on the patio with a thick Brickhouse and a homemade German Altbier.  There's a hint of burning wood in the air, a smell I associate almost exclusively with October in the Midwest.  It's important to take advantage of these uniquely fall moments, because it won't be long until the Sorbus tree that towers above my head is naked and the frost lasts all day.

It's been a heck of a season, has it not?  If you're not completely enamored with everything that's happened over the past three weeks, you've forgotten last year's melodrama.  By this time in 2009 we knew that either Florida or Alabama would emerge from the Southeastern Conference to play Texas for the BCS National Championship.  Sure, we didn't know know, but we knew.  All three teams were dominant in all three phases of the game.

Twelve months later, the national landscape couldn't look any less oligopic.  Every team in the Top 12 of the BCS standings has a well publicized achilles heel.

Auburn has one of the most prolific dual threat quarterbacks in the country, and has been positively dominant at home but their pass defense is abysmal (11th in the SEC) and they have to play arch rival Alabama in Tuscaloosa.  Oregon has an offense that would make Fielding Yost proud, but their defense is undersized, and largely proletariat.  Boise State has won 20 games in a row, and won't lose again in the regular season, but their schedule is about as respected as NFL agents.  TCU might be better than Boise, but there's only room for one persona non grata at the adult's table.  Michigan State has proven it can overcome adversity, and is in control of its own destiny in the Big Ten, but they play above the Mason-Dixon and they're still the Spartans.  Missouri finally has a defense with a pulse, but they still have to beat Nebraska to win the North -- where they'll likely face Oklahoma again in the Big 12 Championship.  Alabama has more talent than anyone, but they've got a loss, an inconsistent backfield, and a vulnerable secondary.  Utah is flying below everyone's radar, but they're susceptible to being jumped by the big boys. Oklahoma is a name brand, but they could just as well be a three loss team by now.  Wisconsin is most physical team in the country and they're through the meat of their schedule, but they lost the only game they couldn't afford to lose.  Ohio State has the second-most talented roster on the masthead, but their special teams are atrocious, their defense is beset by injuries, and they're about as popular as Pieter Willem Botha.  Last but not least, LSU has a name-brand defense, but they were exposed by Auburn, their coach is bat s*it crazy, and their offense is M.I.A.

Why stop there?  It's because in the history of the BCS, no team ranked lower than No. 12 in October has ever risen to claim a spot in the national championship game.

Oh, you want more specificity?  Here are the Top 20 scenarios -- arranged from most to least likely.

Now this looks familiar.  Despite the league's marked drop in depth, the computers and pollsters continue their love affair with the SEC, anointing the winner of the SEC West (i.e. the conference champion) with an all expenses paid trip to Glendale.  That would be either Auburn or Alabama.  It says here the Crimson Tide ride their home field advantage back to the promise land.

Who will they most likely face?  On paper it looks like Oregon.  Yeah, yeah, yeah -- the computers (who live on the east coast and are usually shut down well before the Pac-10 kicks off) don't seem terribly impressed by the Ducks.  Who cares.  If they keep winning -- and I think they do -- wins over USC, Washington, California, and Oregon State will easily solidify their place at the top of the standings.

Same as before, only now the Ducks drop a game down the stretch.  (I'll say its this week against USC).  A Michigan State loss to Iowa and Missouri loss to Nebraska means none of the other contenders will be close enough in the standings to jump the Broncos.  Only TCU can, and they might if they go the distance.  (You'll notice that I group Boise State and TCU together in a number of scenarios that follow.  That's because I think it's more likely than not that both go undefeated.  If they do, we're talking numerical semantics, so as far as I'm concerned they're interchangeable in the major scenarios.  If, on the other hand, the Horned Frogs lose to Utah, it's Boise State that goes it alone).

Same as Scenario No. 1, only now Auburn upsets the Crimson Tide in the Iron Bowl, and goes on to win the SEC Championship game.

Same as Scenario No. 2, where the Ducks get hunted.

Now we assume that the Spartans take care of business this Saturday in Iowa City and win out the rest of the way.  I really don't see that happening -- but if it does, Michigan State jumps the mid-majors to earn a spot in the title game.  No disrespect to Mark Dantonio, but this is bad news for the Big Ten and the game ends up looking a lot like the MSU/UNC 2009 hoops championship.

Same as Scenario No. 5, with an Auburn win in the Iron Bowl.

Oregon falls in the Colosseum, Michigan State loses to Iowa, and the Missouri tigers win the Big 12 -- jumping over an undefeated Boise State and TCU.

Same as Scenario No. 7.  Are you starting to notice a pattern?

Fasten your seatbelts.  We're about to hit some major turbulence.  The only way the SEC gets shut out of the MNC is if Alabama inexplicibly drops a game they shouldn't down the stretch (most likely to LSU), only to best their in state rivals in the Iron Bowl.  Make all the 2007 comparisons you want, a two-loss Crimson Tide won't make it any further than a BCS at large pick.  Although a one-loss LSU could win the SEC, I don't think they pass Oregon and Boise State.

Michigan State chokes at Iowa.  Missouri loses to either Nebraska or Oklahoma in the Big Twelve Championship Game.

Same as Scenario No. 9, but the Spartans win out and jump the mid-majors.

Same as Scenario No. 10, but Michigan State loses to Iowa and Mizzou wins the Big 12.

Same as Scenario No. 9, only now it's Oregon that flinches first, and Michigan State runs the table.

Same as Scenario No. 16, but Oregon and Michigan State lose, and Missouri wins the Big 12.

Same as Scenario No. 17, but Missouri also bites the bullet.

Same as Scenario No. 19, but the Buckeyes jump the Badgers -- largely on the strength of their win over Miami (FL).

Are there other scenarios?  Sure.  Boise State and TCU could meet in Glendale.  But this commentator thinks that hell freezes over first.

Let me have it.  What did I go wrong?