Big Ten Opening Day From The House Of Grange

Share All sharing options for: Big Ten Opening Day From The House Of Grange

Okay, NOW it's football season.  The non-conference games are great, but there's something about football in the Midwest when the weather stats to turn cold that stirs the soul.  There's an anticipation that you don't get during the non-conference schedule, and there is something comforting about historical foes squaring off on a crisp fall day. 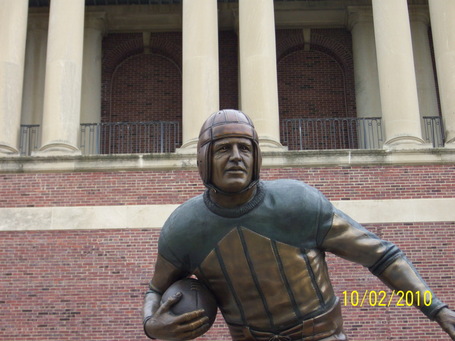 It was against this backdrop that I was able to attend the Big Ten opener for Ohio State and Illinois in Champaign.  It was my first trip to the Illinois campus to take in a football game, and it was a thoroughly enjoyable time.  My thoughts on the Illinois tailgate/gameday experience after the jump.

We rolled in to Champaign about 7:30 and parked in the lots south and west of Assembly Hall and the stadium.  Parking was plentiful, and we grabbed some beers and started to take in the sights.  It was cold, rainy, and windy, but we were undeterred.  Actually, no one was undeterred.  It was opening weekend for the Big Ten, and people weren't going to let a little thing like driving rain and pneumonia get in their way of a good tailgate party.

One of the first things I noticed was the amount of Ohio State fans around.  Yes, I know Ohio State travels well, but for a game against Illinois, in October?  Yes, and yes.  The lots we were in were well over half Ohio State fans, but the Illinois fans that were there were very good natured, and if taligating is a religion, there was nothing but solid football fellowship going on.  Now, there were a lot of Illinois fans out tailgating--making it seem like it was nothing but OSU fans is inaccurate.  That said, OSU fans did manage to overrun at least two parking lots that I saw, and they were well represented in the stadium. 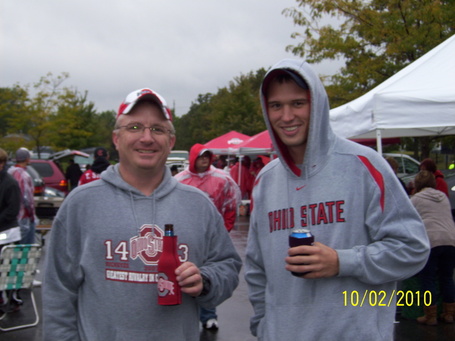 The Book of Tailgate, Ch 1, Verse 1:  Drinketh thy beer with a coozy.

We hung out with some great fans from both teams, and then headed north to look at some tailgating setups.  The first one we ran across was from Illinois, and was a clever short bus into tailgate wagon conversion: 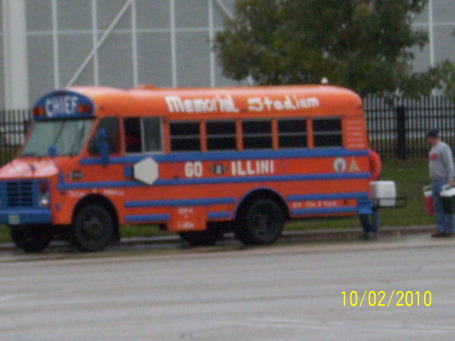 However, the best, hands down tailgate setup I have ever seen was a set up by a guy named Brian, who apparently is rich.  His rig was a custom made trailer that is essentially a portable living room, with a bar, beer taps, 60" LCD TV, leather couch, and a grill that was almost as impressive.  If my folks had framed their arguments for getting an education in this manner (study hard, get good grades, get a good paying job, and this can be yours) I would have been a valedictorian: 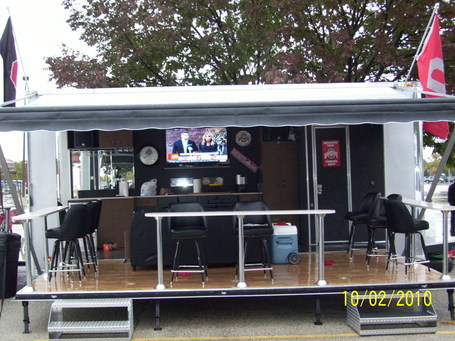 This is what a lot of discretionary income can get you.

Soon, the beer ran out game was about to begin so we headed towards the stadium.  Getting into the stadium was no problem, and we scored seats on the 35 yard line about 20 rows up, for only $45 (thanks Kyle, and crappy Illinoiis football team!).  Unlike TCF Bank stadium, which is brand new, Memorial Stadium is steeped in history, but has been modified for the 21st century.  The field has a modern, HD scoreboard, modern day field turf which is perfectly maintained, and fireworks that go off every time Illinois scores...BUT.

But I couldn't help but think that when I first sat down and looked on the field, that this was the same field that Red Grange played on, that Dick Butkus played on.  But it was more than a game, it was the continuation of traditions that have been passed around since Red Grange played.

It was just a game, some say, but it was also an affirmation of something bigger than ourselves.  It was the continuation of something that was here long before we were around, and will continue long after we move to the big tailgate party in the sky.