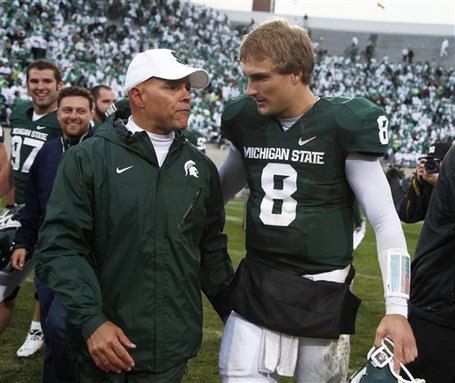 There's nothing wrong with Plan B...

Now that we're a solid week into conference play, it's time to take a look at what we know as well as what we don't in the Big Ten.

1. Spartan Success is No Longer an Oxymoron

Early on Mark Dantonio's teams followed suit.  After a 4-0 start in 2007, the Spartans lost 5 of 6 games.  And although they went 9-4 in 2008, they were absolutely outclassed in their two biggest games of the year, a 7-45 loss to Ohio State, and 18-49 loss to Penn State.  Another pounding at the hands of the Nittany Lions last year (14-42) showed that the Spartans still weren't ready to run with the big dogs.

Until now.  Although on paper this year's 5-0 start looks eerily like the ill-fated campaigns of the past, there's one principal difference: this Spartan squad is winning when it counts.

Sure, then No. 11 Wisconsin hasn't played like a Top 15 team, but the Badgers are a member of the Big Ten's upper echelon and its that establishment that has given Michigan State trouble in the past.  Regardless of what happens this week in Ann Arbor, Mark Dantonio's team has shown it's a legitimate factor in the conference race.

If they can out score Michigan in Ann Arbor on Saturday they'll only be an underdog in one game the rest of the season.  Survive visits to Iowa City and State College, and these "Little Giants" will be Big Ten Champs. 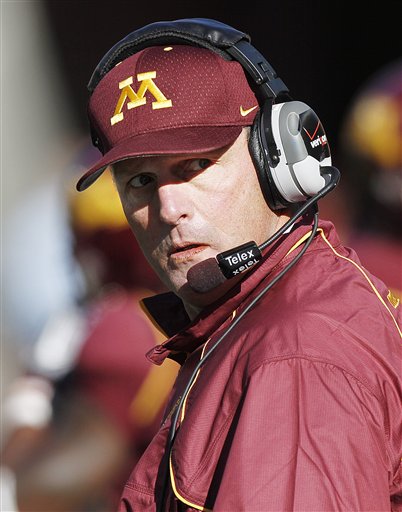 D is for delusional.

It's one thing to be positive.  It's another to be delusional.  Tim Brewster's rhetoric is starting to tread dangerously close to the latter.  I started to get suspicious when I read Brewster displays a replica national championship trophy in the locker room at TCF Bank Stadium.  Then there was a pre-season interview with 97.1 The Fan in Columbus, when Brewster defended his 14-24 record in Minneapolis by maintaining that he had to start from scratch after taking the program over from Glen Mason in 2007.  Correct me if I'm wrong but Glen Mason took the Gophers to five consecutive bowl games.  A six win team is starting from scratch?

Then there was this propaganda, posted on Brewster's website after the loss to FCS South Dakota State.  Two minutes and fifty seconds of highlights show the Gophers absolutely overwhelming the Jackrabbits.  The video conveniently ignores the reality of Minnesota getting outplayed and embarrassed at home.

What's a coach to do after stomaching the worst loss of his career?  Complain about a lack of funding for the program, of course.  Nevermind that the University just spent $288 million on a spanking new on campus stadium.

That brings us to Brewster's latest, and most ridiculous slight of hand.  After dropping his fourth game in a row and falling to 1-4 on the season (including losses to FCS and non-BCS opponents) Coach Brew insisted that "we could be sitting here 5-0 right now."

The Gibson-Nagurski Football Complex is starting to feel a bit like Shutter Island.

Pull yourself together, Teddy Tim.

3. Ohio State is Not Invincible

When Terrelle Pryor is healthy the Buckeyes are as dangerous on offense as they've been in four seasons.  But when the big man struggles, Ohio State's attack is about as threatening as Batman's sidekick, Robin.

Illinois laid the blueprint for silencing the scarlet.  Slant at the snap.  Shoot the gaps away from the halfback when in shotgun (thus taking away the zone play), or towards the tight end when the Buckeyes line up in the I Formation.

Pryor's strained thigh muscle may well prevent him from capitalizing on the backside lanes defenses are forced to give when they gamble to stop the run.  Meanwhile, Brandon Saine and Boom Herron are failing to find the holes the offensive line gives them.  If Pryor can't get back to 100 percent -- or the coaching staff demands he stay put in the pocket -- the Buckeyes will be forced to again rely on an opportunistic defense to settle the score.  Ordinarily I wouldn't have a problem with that.  But injuries to the secondary (specifically C.J. Barnette and Tyler Moeller) have left the Silver Bullets shallow in the depth department.

It might not show up this week, but unless Pryor's rehabilitation gets him back on his feet, the Buckeyes are bound to drop a game down the stretch.

1. Will Ron Zook Save His Job?

It's one thing to say Illinois always plays Ohio State tough, and another to admit that the Illini are slightly exceeding expectations in a season that is every bit do or die for Ron Zook.

I attribute Zook's new found success to fresh blood in both the offensive and defense coordinator roles.  Paul Petrino has giving the Illini more fight than we've seen in two seasons.  From shifting tight end sets, to play action bootlegs, Nathan Scheelhaase looks more comfortable behind center than Juice Williams ever did.

Meanwhile, the Illini defense is fifth in conference -- meaning they might be just good enough to starve off the fourth quarter collapses that have defined the last several seasons in Champaign.  Illinois might be able to grab a signature win in State College against a strikingly one-dimensional Penn State team this weekend.

If they do, they'll be favored in at least four of their final seven games.  That's enough for a seven win season.  And who knows, they could very well end up 8-4.  Make a bowl game, and I think Zook lives to see another day. 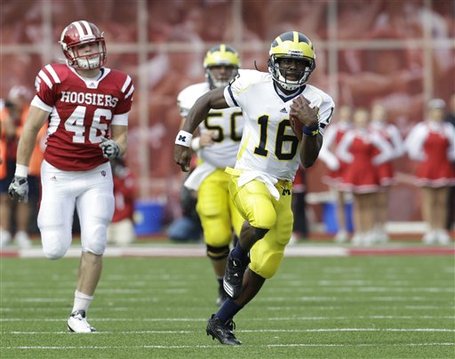 Catch me if you can.

Look, the kid deserves every bit of praise the mainstream media has lopped upon him.  But the challenge of being the proverbial Alpha and Omega for Michigan's grand renassiance is that Rich Rodriguez has placed all his eggs in one basket -- albeit a sensational one.  Robinson has seen the sideline in at least three of the Wolverines first five games -- most notably after an in bounds collission forced him to the bench with an apparent knee injury against Bowling Green.

Although he's the clear favorite for the Heisman Trophy, it remains to be seen whether his 193 pound frame can withstand multiple encounters with Big Ten linebackers.

If Robinson stays heathy, Michigan's production just might continue to make Fielding Yost proud.  But if he doesn't... 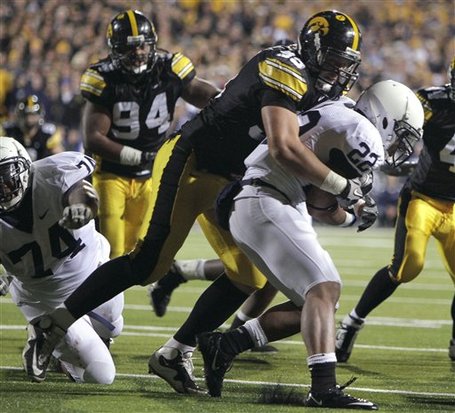 The Big Ten's best defense might reside in Iowa City.

3. Is Iowa who we thought they were?

It's no secret that I had high expectations for the Iowa Hawkeyes heading into 2010.  It's also no secret that I expressed extreme skepticism about the team's fortitude after a sloppy after-hours road performance in Tuscon.  The Hawkeyes showed that they were a work in progress that night, particularly on special teams and the offensive line. Yet, after rebounding against Ball State, and manhandling Penn State, the Hawks look like the conference contender we thought they were.

Their schedule is pretty favorable.  Although Iowa still has to play four ranked opponents, they get all but one at home. A bye week heading into the heart of the storm should give Kirk Ferentz all the time he needs to prepare for battle.

It won't be easy, with a trip to Michigan, and visits from Wisconsin and Michigan State in consecutive weeks -- but if the Hawkeyes are 7-1 heading into November, they'll be the team to beat in the Big Ten.