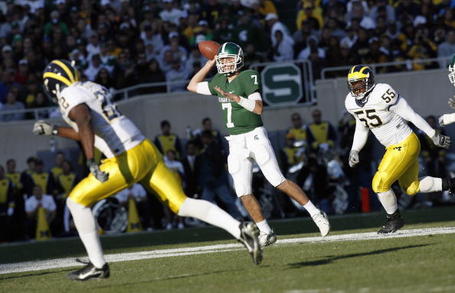 [After the spectacular critical acclaim of Ted Glover’s post "Why Michigan Will Beat MSU", I decided to bribe someone with a case of Leinenkugel to write a counterpoint.  Ted confided to me that he was indeed "for sale" and agreed to write the counterpoint.  But then real life – as real as a trade involving your favorite team and a wildly talented but aging prima donna wide receiver returning to the team where he saw his best years can be – intruded, so Ted bribed me back with the original bribe.

As I was drinking the three bottles of the Leinenkugel that I designated as an advance on the article, I decided that I shouldn’t write this article as a Spartan fan, but that I should try to write it from the perspective of a third party.  So I decided to channel my inner Minnesooh’t’n Buckeye fan, and write this FanPost from a point of alleged neutrality. It is suggested that one read it out loud with a Minnesooooohta / Ohio accent, just for kicks.]

This Saturday, the Big Ten Game of the Season of the Week will take place in Ann Arbor.  Two insufferable teams – The University of Michigan Arrogance and the Michigan State University Inferiority Complexes, will match neurosis against neurosis in a winner-take-all battle for bragging rights, recruiting, and ownership of "the now abandoned property formerly known as the State of Michigan".  All will be settled, at least until basketball season starts, and the rest of us can all get some peace and quiet.

Michigan has demonstrated amazing aptitude offense this year, led by their best player, sophmore quarterback Denard Robinson.  Denard is a run-first magician; he has the vision and acceleration to find the holes opened for him by the underappreciated Michigan offensive line, and the breakaway speed to make big plays happen.  80-yard touchdown runs are nothing to Denard.  He also has shown this year that he has learned to throw and throw well; this was an ability (actually, lack thereof) that previously prevented him from passing Tate Forcier on the depth chart.  As a sophomore, Denard is a dual-threat quarterback that has demonstrated both the running and passing abilities that make him the key part of the Rich Rodriguez "Spread ‘n Shred" system.

Michigan has been struggling to implement this system the last two years; churning players and bringing in more Free Agents than the Detroit Lions, trying to find some guys that stick and can play the system.  It truly appears that Michigan has made "the Rodriguez Leap", and is now a wildly creative and highly skilled offensive juggernaut.

Michigan State has already given some hints about adjustments they are making in preparation to face Denard.  The depth chart eliminates the RUSH end designation, and shows that two lighter, quicker ends (Tyler Hoover, and Colin Neely OR converted linebacker Denzel Drone, all sub-260 pounds) are playing at the defense end positions.  In addition, lanky linebacker Jon Misch (6-3, 207) is now listed as starting at STAR, the tweener linebacker position.

Realistically, Michigan State’s defense has no hope of actually stopping Denard.  Denard will get his yards, both rushing and passing, against a Michigan State defense that is definitely improved but still unable to be considered "elite".  All that Michigan State can hope to do is play a "run prevent" defense; that is, to keep Denard to the inside of the field, and his runs to 10-15 yards or less.  If Denard gets to the outside, or breaks through to the secondary, he is gone.  Michigan State’s defensive goal is to keep Michigan’s offensive efficiency to 50% Drive Success Rate or less.

As spectacular as Michigan’s offense is, the Michigan defense is equally spectacular – spectacularly bad.  Right now Michigan fans hold their breath when Michigan is both on offense and on defense – on offense in anticipation of Denard making an amazing play, and on defense in anticipation that the ground is about to open up and swallow the last good defensive players.  Thus allowing non-fleet-footed Michigan State quarterback Kirk Cousins to make an 80-yard run that looks amazingly similar to one of Denard’s, meanwhile throwing for 470 yards and 5 touchdowns.

Michigan State’s offense is widely known as run-first, power-I, smashmouth, old school Big Ten Football.  However, this is far from the truth.  Michigan State has a very balanced offense, capable of the power run game as well as the spread passing game.  Don Treadwell, MSU’s offensive coordinator and future head coach elsewhere, can adjust the run-pass balance in accordance with the game situation and the opponent’s strength.

Treadwell has a whole suite of options to use.  MSU’s offense has no less than three very capable running backs: Edwin Baker and Le’veon Bell are the two primaries, with Larry Caper as a receiving option and blitz pickup specialist.  MSU’s offensive line is, as is typical for MSU, a straight-ahead, power running team.  They use their size and strength well in the power run game, and this year, Bell in particular has demonstrated, dare I say it, a Denard-like ability to see the hole and bounce to the outside for big plays, unlike the "crash into the pile" runs that trademarked MSU’s run game in the past.

MSU’s offense also features a very talented receiving corps that includes Mark Dell and B.J. Cunningham as the tall possession receivers, and Keyshawn Martin as the speed option.  Dell, Cunningham, and Cousins work very well together; a favored technique is hammering the sideline stop route for first downs.  Martin is displaying better hands than in the past, and is always a threat to run the reverse.  Besides the wide receivers, MSU features two very capable tight ends, Charlie Gantt and Brian Linthicum.  Both are very capable at blocking and even better at receiving, if the primary options are covered.  About the only weakness in the receiving corps is converted quarterback Keith Nichol, who is still learning the position.  MSU hasn’t found a way to get Nichol involved in the offense yet; he certainly is no Blair White.  However, I’m not convinced that they won’t find a way to use Nichol in a trick play or two on Saturday; maybe a double pass.

Heading all this is Kirk Cousins, the junior quarterback and team leader.  Cousins is an understated kind of awesome:  watching the game, you think he performed poorly because of drops or interceptions; but then you look at the box score and realize he was 20-29 for 269 yards and 3 TDs.  The only knock on Cousins is his desire to make a play on every play; usually it works, but occasionally, he ends up forcing the ball into triple coverage or winging it across his body off his back foot, resulting in disaster.  Overall, though, Cousins is quietly becoming one of the best quarterbacks in the country; he is currently #13 nationally for passer rating (164.82), and T-#10 for yards per attempt (9.4).  He doesn’t have near the passing yardage of a Bryant Moniz (Hawaii) or Sean Renfree (Duke), but that’s only because MSU’s balanced attack is not asking Cousins to throw the ball 40+ times a game.

To achieve that, Michigan State’s strategy will be one of "run the clock", both offensively and defensively.  Offensively, Michigan State will run the ball to the middle of the field and off-tackle, with the occasional pass  -- to keep Michigan off balance and to keep drives going as needed.  I look for MSU to run the ball on 65+% of plays from scrimmage.  Michigan State will also seek to keep the pace of play as slow as molasses, with plays (both running and passing) terminating on the inside of the field, using all of the play clock, and generally keeping the clock running.  A desired goal would be to average 45 seconds on each play.  With that average, then, an 8-play drive would last 6 minutes.  Five drives that met that standard would last 30 minutes; four additional drives averaging half that duration (3 minutes) bring the total to 42 minutes.  (Even a "three-and-out" drive could be stretched out to last over two minutes.)   The ability to kick field goals makes MSU more likely to come away with points if in Michigan territory, albeit at a lower points per drive rate.  MSU will seek to be successful on more than 50% of drives, scoring on 5 of 9 drives for 31 points.

Then, defensively, MSU plays the "run prevent" – letting Denard have his 15 yards per play but keeping him to the inside of the field where the clock continues to run.  This only allows 18 minutes total for Denard to work his magic; at two minutes per drive, that gives Michigan only nine drives.  By not giving up the big play, and forcing Michigan drives to use the clock (one of the downsides of the run spread), the limited time of the game becomes the 12th defender against Michigan’s potent offense.  Michigan will score touchdowns on 4 of 9 drives, for 28 points.

You will note that I haven’t included turnovers in this calculation.  Besides being relatively infrequent, turnovers are relatively random; a team can’t count on turnovers as part of a winning game strategy.  In addition, Michigan State has been good enough to win despite being a net minus on turnovers against FBS opponents.  Even if MSU turns the ball over on a drive, as long as they have met the 3-minute drive duration minimum threshold, and still are successful on 50% of the total drives, that turnover-ended drive is actually a positive outcome for Michigan State’s strategy.

Special teams are a push.  I don’t feel like getting into them here because they are overemphasized, in my mind.  A special teams touchdown is lightning in a bottle; it may have a dramatic effect on the outcome of the game, but is extremely rare and definitely cannot be counted on.

Penalties are also immaterial in my analysis.  Michigan State, despite being relatively heavily penalized this year, has shown an ability to render those penalties meaningless by subsequent actions in the game (for example, a holding penalty moves MSU back 10 yards from the opponent’s 25 to the 35, but then on the very next play Cousins throws a 35-yard touchdown pass.  The penalty is effectively wiped away.)

In summary, I see Michigan State utilizing a slow pace of play to drag the game out as long as possible, minimizing the total number of offensive possessions.  Denard is unstoppable as usual and gets his yards and scores, but not often enough.  Michigan State, 31-28.