Share All sharing options for: OTE Is Watching You: MSU LB Greg Jones v. Wisconsin...And How He'll Match-Up With Denard

I've been lackadaisical towards "watching" individuals this year; that's the overwhelming nature of campaign work kicking in. But I knew it would be a good look to see how Greg Jones matched up versus the excellent Wisky tailbacks. So here's a play by play, followed by discussion of why the Spartans improvement on defense still leaves hope for the Wolverines on Saturday. 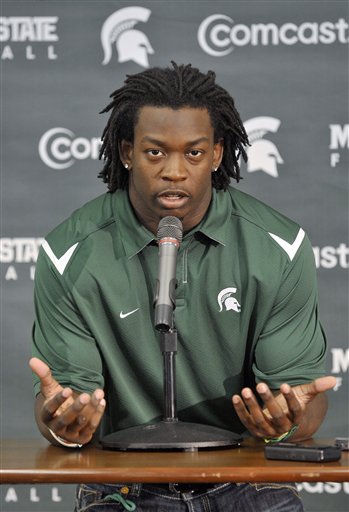 MSU comes out in a 4-3 and Greg Jones sits comfortably in the middle. One thing you'll notice is that Jones doesn't get whipped all around when Tolzien play fakes; it's the mark of a talented and confident LB. Jones zips through on third down to smash Tolzien while WR Toon does a bad impression of his father and drops a perfect throw.

GJ takes on a blocker on first down and easily beats the block. After a John Clay first down, Chris Norman and Jones flow easily to stop a rollout pass. Third and long, here comes Jones off the corner ("added 12 lbs of muscle") who easily gets to Tolzien and causes an incomplete pass. Punt time. That's two clean, big hits on the QB so far for Greg Jones.

After a Cousins pick, Wisky takes over at midfield. Wisconsin slams the ball up the middle three times in a row on designed cutback runs. The first two times, Jones flows too quickly to the run and is picked off by a 2nd level blocker. The third, GJ is again met by a 2nd level blocker and doesn't factor in the play. FINALLY, Jones learns his lesson and beats two different blocks to get to a ballcarrier. Note - He beat a tight end and OT. Chris Norman cleans up on second down with a nice hit. According to the announcers, Jones plays more in control than ever before because he trusts his teammates. If my teammates stopped Wisconsin from scoring in the first quarter, I'd trust them a bit more too. Wisky completes a beautiful sideline pass and James White finishes the drive with a long touchdown run and we see something that will come up again: The Spartan linebackers get sucked into the middle on runs, making them a formidable inside run stopping team, but susceptible to cut backs.

Jones and the secondary sniffs out a throw back pass and Tolzien gets rocked again for an incomplete pass. Jones pass rushes on third down and barely misses another sack. No tackles so far, but numerous pressures.

Jones misses a tackle on Clay and swings his arms in frustration. Eric Gordon plasters Clay on the next play to set up 3rd and 1. Jones sneaks into the backfield to force a fumble and a Spartan stop. We need to start a "Jones spends more time in the backfield than ___" joke, but I don't know where else you spend a lot of time in a backfield. Keshawn Martin returns a punt for a touch...Sparty Woah!

Jones slips on another Wisky cutback and yells in frustration. He makes up for this by getting a TFL two plays later. Jones is used for another straight middle blitz that disrupts Tolzien's timing. MSU stuffs Wisky again, but another Spartan TO gives the Badgers perfect field possession. Wisky continues pounding the middle and after a sack, fumble recovery, and subsequent TO, Wisky has a 2nd and 37. Toon drops another one and GJ is in perfect position to defend. Third and forever, Jones reads the screen, is held to the ground, makes the tackle anyways. That's three tackles and three QB hurries by my count.

Jones waives his arms to exhort the crowd, but all it does it inspire the Badgers to drop another pass. A nice James White bounce out gives the Badgers their first first down in awhile. And then James White busts his second TD, showing that although MSU is vastly improved on defense, their over-aggressive nature is hurting them badly when it comes to ballcarriers who can make cutbacks.

Trenton Robinson and Jones have been shaking off blocks all day to slow running plays. The Spartans are switching to a 3-4 on 3rd and long scenarios and it works for another stop. This defense is too quick laterally at the LOS for stretch plays to work.

Kendricks begins the drive with a ceremonious drop. GJ skips over a cut block, only to see Clay go the other way for a first down at midfield. A backup tight end eats up Jones and Clay busts another first down. "The Wisconsin OL gives out more pancakes than Aunt Jemima," says the announcer as the entire ESPN network scrambles to see if this is an inappropriate comment in any way. 3rd and long after another Badger drop and some nice aggressive Chris L. Rucker defense. A middle screen goes right over the blitzing Jones, first down. Jones picks up his fourth tackle, but Wisconsin is going downhill, finally completing passes...just like the subsequent touchdown to Jacob Petersen. The TE fights through some aggressive hand checking by Jones to get open in a zone.

And that's about all she wrote for looking at Jones.

Strengths: Jones is being used much the same way as last year when it comes to blitzing and pass defense. He can do everything well, which means he's just as comfortable in zone pass coverage and rushing the QB. His spin move is still devastating and he covers ground extremely fast on the way to QB's or ballcarriers.

Weaknesses: Time and time again, this Spartan defense over-pursued the Wisconsin running backs, leaving lots of room for cutbacks...and the Badger exploited that. Jones was a victim of these cutbacks, designed or not designed.

Discussion: Greg Jones is fast enough to play OLB in the NFL and tough enough to make plays with blockers draped all over him. But his weakness (above), combined with a much more confident and aggressive Spartan defense, may give Denard Robinson and the Wolverines some hope. Let me explain with some logical steps:

Step 1: MSU is much more aggressive and confident across the board on defense this year. While their secondary may still not be excellent, Trenton Robinson and Chris L. Rucker have improved and showed All-Big Ten talent against Wisconsin.

Step 2: Michigan loves it when you over pursue. The Run Spread is perfect for flowing blockers and ballcarriers one way...and then flipping a pass the other way or allowing a Denard cutback.

Of course the Spartans are thankful for having a much less terrible defense than last year, spurred on by the talented Jones. But the matchup between the All-American LB and the Heisman-race leading Quarterback certainly holds some intrigue.